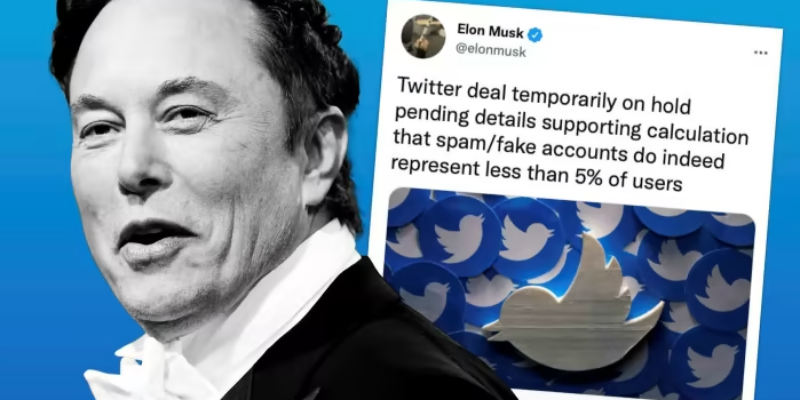 “He didn’t just purchase a company…. He purchased evidence in criminal cases.”

Jack Posobeic was saying this way back on April 27. And the more this Musk-Twitter drama plays out, the more it seems that this is a precise, systematic unveiling of evidence that will expose the cockroaches for what they are. Sort of like the film 2000 Mules and its rampant evidence of election fraud–a story I will later show has a direct relationship with the dismantling of Twitter as we knew it.

It is converging stories of dark to light. And it is glorious.

Twice recently, we have called Elon Musk the presumptive new owner of Twitter because we are not fully convinced that this purchase is as clean-cut as buying a new pickup truck. After all, right smack dab in the middle of a cataclysmic information war rife with mainstream and big tech propaganda, an everyday civilian (notwithstanding the richest man in the world part) has been carrying out a seemingly calculated plan with a surgeon’s precision.

In other words, Twitter is going down before the public’s very eyes in a way that never would have happened if government legislation had to get involved. Getting Section 230 legislation to pass would have been a lengthy nightmare that, simply put, the American people would have tuned out.

Just like we always do because we’ve been conditioned to believe that not a damn thing of consequence ever gets changed in this country.

“Judging by the speed and volume of replies to my tweets (many faster than someone could read my tweet, formulate a response and type it with all of them being totally off topic as well) there’s literally ZERO % chance that Twitter is less than 5% Bots.”

Many will remember that when President Trump was still on Twitter, there would, instantaneously, be hundreds of well-conceived responses to his tweets.

In another tweet from Friday, the humorous Musk tweeted, “The bots are angry at being counted.” In another from yesterday, he ran a “poll” that seemed more like a rhetorical question meant to sardonically expose the truth about Twitter.

Twitter claims that >95% of daily active users are real, unique humans. Does anyone have that experience?

On Monday, Musk claimed to believe that 20 percent or more of Twitter users are actually bots or spam accounts. He is also concerned with the seeming refusal of Twitter executives to shoot him a straight answer as to the number of bots question, quipping that a home buyer might buy a house with five percent termites, but “if it turns out it’s 90 percent termites, it’s not okay.” It is a video worth watching based on the comedy only, if not based on the infinitely serious content.

If bot activity is in fact 20 percent or more, this is an obvious attack on the American people. If this is true, Twitter has been a weapon of the far-left deep state used to hack our minds and sway our beliefs, to create fear and pressure against free thinkers. We have examined the phenomenon called the tipping point before in an article on 2000 Mules and the great election steal, and it is worth revisiting here–these two stories absolutely intersect in a way in which all of these conspiracies against Americans do.

The tipping point is that magic moment when an idea, trend, or social behavior crosses a threshold, tips, and spreads like wildfire. Just as a single sick person can start an epidemic of the flu, so too can a small but precisely targeted push cause a fashion trend, the popularity of a new product, or a drop in the crime rate. This widely acclaimed bestseller, in which Malcolm Gladwell explores and brilliantly illuminates the tipping point phenomenon, is already changing the way people throughout the world think about selling products and disseminating ideas.

See, people naturally want to be a part of the group, the mainstream, the majority. It is why group think or mob rule or hive mentality or mass psychosis or any number of other similar phenomena work. Because of this, when people see a certain opinion dominating the social media landscape, say on Twitter for instance, they may automatically think that it is they who are wrong if their opinion is different. They are more likely to join the crowd just to avoid the cognitive dissonance involved, even if they do recognize that the spread is akin to cockroaches. People are willing to believe and join the crowd no matter how bad the crowd is.

Get enough of these individuals, millions lets say, to change their minds based on the activity of millions of fake accounts, and what you have is a group think powerful enough to not even believe evidence when it is put right in front of them. You have a group think powerful enough to call into question even the most obvious truths and call them conspiracy theories.

We didn’t need 2000 Mules to know the truth. Simply a cursory glance at the swarms of crowds at Trump’s 50-plus rallies before the election and a comparison with Old Joe’s pitiful campaigning from his basement was evidence enough.

We have become a society that has been brainwashed into believing non-human, fake opinions over the opinions of real citizens who put in the work and do the deep dives necessary to cull the truth. We have become a society that trusts the enemy over a true friend simply because the enemy is so good at hiding behind the walls. Here is one of those enemies, from none other than Twitter, the tech giant that is, in this Sr Engineer’s own words, “Commie as F**k”:

Elon Musk, I believe, knows all of this and knew it all along. The details involving this evolving story are too clean. They have happened with stunning alacrity. It is all a little too tidy to be coincidence.

He is forcing them into a corner. He is pressuring them to prove that the bot activity is in fact at five percent or lower, which he knows won’t happen. He is exposing all of this for the many advertisers (who weren’t even marketing to real consumers!) and shareholders who have always been under a false impression. Simply put, the value of Twitter is greatly nullified with every percent increase of bot activity. He may be pushing for a better deal, yes, but whatever his end goal may be with the company, he is absolutely exposing them for the cockroaches they are.

He has caught them in a massive fraud on the American people.

And what’s most important is that all of this is happening in a way and at a pace that is easily digestible for that same American people. The everyday citizen knows Twitter. It may not know or trust 2000 Mules yet. But when Twitter goes down, and the dots and bots are connected, things like 2000 Mules–and how on Earth we have been brainwashed into not believing such obvious truths–will make more and more sense to people.

That is why this great revival, this great awakening, is such a glorious thing. It will take time, yes. But in the end, it will all be worth it.

Right at publication of this article, a Newsweek report was released that says half–50 percent–of Joe Biden’s followers on Twitter are fake.

Almost half of President Joe Biden’s current 22.2 million followers on Twitter are fake accounts, according to an audit tool provided by software company SparkToro.

SparkToro’s tool found that 49.3 percent of accounts following the official @POTUS Twitter account are “fake followers” based on analysis of a number of factors, including location issues, default profile images and new users.

Keep in mind this is liberal Newsweek that released this.

In response, the always-piquant Musk tweeted, “So … [checks calculator] … that would be like 10 times more than 5%.”

Interested in more national news? We've got you covered! See More National News
Previous Article APPEL: Cade Brumley, Thomas Paine And Patriotism
Next Article The Federal Morons Have Fixed It So Gasoline Won’t Come Down Until The Economy Does