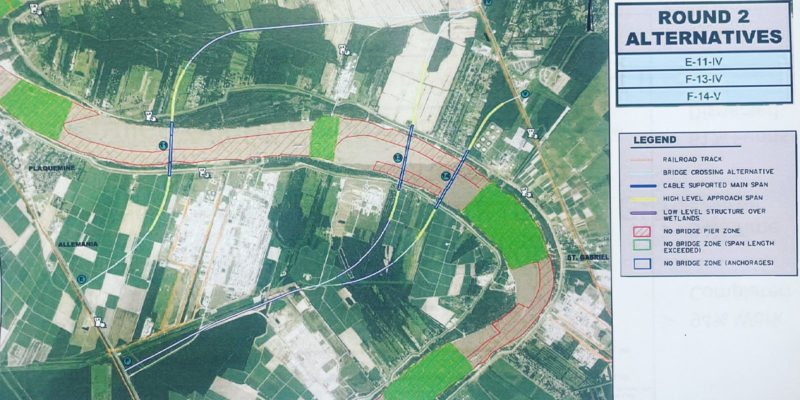 They’ve just come out with a “final 3” list of options where the Louisiana Department of Transportation and Development is considering building a bridge over the Mississippi River south of downtown Baton Rouge.

That bridge is 20 years overdue. It’s nice to see that apparently our state government is finally interested in building it. But if you think this, without a great deal added to it, will fix much of anything you are sorely mistaken.

The Capital Area Road and Bridge District committee met with consultants at the State Capitol Friday morning where they announced that all three of the finalists are located in Iberville Parish.

All three options would stem from LA 1 in Iberville Parish, one spot just south of Plaquemine and the other two roughly halfway between Plaquemine and White Castle.

All three bridge proposals would also extend to LA 30 on the east side of the river. Two of the proposals put the east-side entrance just north of Bayou Paul Lane, with the third option putting it south of the roadway.

First of all, essentially this is a bridge that takes you from Plaquemine to St. Gabriel. That’s not exactly what it is, but functionally, any of the three bridge locations take you from Highway 1 on the west side south of Plaquemine to Highway 30 (or, in Baton Rouge parlance, Nicholson Drive) on the east side north and west of St. Gabriel.

How do you get back on I-10 from this bridge?

And if you’re going through Baton Rouge on your way, say, from Houston to Mobile, why would you get off I-1o to find this bridge and take it?

And here’s the big question – if you were to choose to take this bridge on that Houston-to-Mobile journey, how do you get to I-12?

Because finding I-10 on your way east is doable. Regardless of which of these three options is exercised, you get off that bridge and hang a right on Highway 30, and it’ll take you to Gonzales where you can get on I-10 at the Tanger Outlet Mall exit. Of course, for much of that stretch of roadway you’ll be on a two-land road; maybe DOTD has a plan to four-lane it all the way down, but one would have expected that project to have already started and it hasn’t.

But nobody on that Houston-to-Mobile journey wants to waste an hour taking I-1o down to New Orleans and following it to Slidell. They want to get on I-12 and cut straight across the Florida Parishes.

How does this bridge facilitate that?

It doesn’t. There is no plan to move traffic on anything other than surface streets from the bridge to I-12. Which means this bridge is useful for local traffic and that’s it. Essentially it makes it convenient to live in Prairieville and work at the Dow Chemical plant in Plaquemine.

Which is great, and all, but it isn’t particularly worth the better part of a billion dollars of our tax money.

This bridge is needed. Never once has it been brought forth as part of a holistic plan to actually solve the traffic problems of Baton Rouge, the number one cause of which is 18-wheelers driving across the I-1o bridge and rolling straight through downtown in the middle of rush hour while the state employees who’ve been stashed in those buildings are trying to make their way to Ascension and Livingston Parishes.

You need a loop for that. There is no loop. There is no plan for a loop. And traffic won’t get better for having built this bridge.

Could the bridge be an element in an eventual solution? Maybe. But that solution needs to go on the books now, not in another decade. And it’s already too late. Pull up Google Maps and see if you can navigate enough open space in northeastern Ascension Parish or southeastern East Baton Rouge where you could run an interstate-quality highway from one of the I-1o exits between Highland Road and Sorrento to I-12 in Livingston Parish.

Not easily done, and getting harder every year as that area is developed. It should have been done 20 years ago when it was doable.

For the money we’re giving these people, we really should be getting more than half-assed solutions like this. They’re just wasting and stealing our money at this point.

Interested in more news from Louisiana? We've got you covered! See More Louisiana News
Previous Article Uvalde Isn’t An Argument For Gun Control. It’s The Opposite.
Next Article SADOW: Schroder Should Extend Louisiana’s Defenses Against The Woke