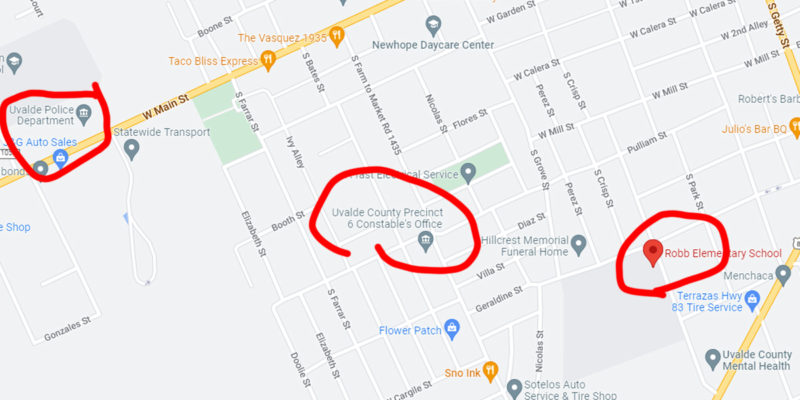 We’ve already posted our reactions to the Uvalde massacre in a macro/societal context. If you can’t see the explosion of violence not just in Uvalde and Buffalo, and at that Taiwanese church in California where a massacre was ignored because it was perpetrated by a psychopath affiliated with the Chinese Communist Party which holds such sway over our media elite, but in every major and mid-sized city in America, as the fruit of a spiritual crisis too long ignored in this country, at this point your willful ignorance cannot be excused.

We’re at war with God and the casualties are mounting. You don’t have to be born again or even particularly religious to understand that a society unmoored from its founding moral principles will make monsters, and soon the monsters will control that society as it crumbles.

Which is where we are.

And what we see over and over again is that the monsters take the form of ghouls following these mass casualty events. You know what a ghoul is, right?

The bodies weren’t even cold in Uvalde before politicians and media mouthpieces hundreds of miles away were demanding “public policy” solutions to a spiritual crisis.

The so-called leader of the free world, that doddering, crooked old creep who occupies the White House while steadfastly refusing to do anything to lead the country out of its protracted state of accelerating decline, rushed to the cameras to demand gun control and calling “sick” the people who are buying what he calls “assault weapons” – otherwise known as common, medium-caliber rifles.

Salvador Ramos, the shooter in Uvalde who harvested 19 kids and two teachers in a classroom at Robb Elementary School over the space of an hour Tuesday, largely unmolested as he was doing so, had two such rifles when he crashed what appears to be his grandmother’s Ford F250 pickup truck into a ditch near to the school. Only one of Ramos’ rifles went into the school with him.

But the police on the scene in Uvalde who stood outside of the school and kept back panicked parents begging to volunteer to go inside and save their children? They had lots of such rifles.

And how much good did it do?

We’re told by the Joe Bidens, Kamala Harrises, Chuck Schumers and Beto O’Rourkes of the world – the modern-day, telegenic ghouls who feed off the corpses of victims of school shootings perpetrated by soulless, disconnected losers whose only value seems to be in promulgating the gun control narrative as their diseased brains cook off to extreme collateral damage – that America will be safer if we get the guns off the streets.

They’re saying this and they’ve been saying it for years. The ghouls get louder and more shrill with every fresh feeding from the bodies of the dead.

But they say other things, too. Not as consistently.

They’re not talking about defunding the police this week, are they?

And why do you think that is? Well, what’s the argument? And how do you make it?

The ghouls are telling you that because Salvador Ramos, who rode around shooting people with BB guns, who cut his own face with a knife and then claimed he’d gotten in a fight with a cat, who regularly terrorized classmates and who is now said to have been arrested four years ago for plotting a mass murder once he’d turned 18, did what his entire life was leading up to in eyeshot of his whole community and nothing was done about it, you have to consent to have one of your most fundamental rights infringed upon.

There is an implicit, insulting promise in all of these gun-grabbing ghoulish speeches, which is that you should give up the means of protecting yourself so that you can outsource that to the government. If the government thus has a monopoly on violence, it can be trusted to use that monopoly in benevolent ways and make you safe.

But there is no historical evidence indicating this is so.

Governments able to disarm their populations act in the most bloodthirsty, merciless and foul ways imaginable. Nazi Germany, Russia, China, Cuba, North Korea, Cambodia, the list goes on. In medieval times, before there were guns, the people were lucky to have weapons better than an axe or a small knife. The king and his nobles would employ knights armed with swords, maces, suits of armor, war horses. And when the king or lord sent his men to impose his will on the populace, no resistance was possible.

No resistance has been possible in disarmed Australia, a supposedly free and democratic country which stupidly gave up its weapons and ceded a monopoly on violence to a government which then imposed draconian lockdowns and quarantine concentration camps on its people in the name of moronic and tyrannical “COVID zero” policy. And that’s what the ghouls demand we subject ourselves to.

But our country was founded by men who recognized there is no democracy, no true freedom, unless a balance of fear and a balance of capability for violence existed between governors and governed.

The government must fear the people, rather than the reverse, if there can be limits on power.

The ghouls don’t believe in those limits. They want you to give up your gun and outsource your safety to the police whom they will hobble and defund. And that means your safety is then dependent on the whims and delights of the criminal class, or the psychotics like Salvador Ramos the culture they’ve created grooms and fosters in such appalling numbers.

Society is crumbling and you need a gun. Proof of that came during that fateful, agonizing, hideous hour while those desperate, helpless parents in Uvalde were held at bay while Salvador Ramos exterminated their children at his pleasure.

Want to know how much of their tax dollars are spent on law enforcement?

Forty percent. Forty percent of Uvalde’s municipal budget goes to a police force which stood by and held them back as their children were executed in the worst mass shooting in Texas history. How’s that for a return on investment?

This is the Uvalde police SWAT team. This community of 13,000 people spends 40% of its municipal budget on the police. pic.twitter.com/85ipE8kx7H

There is a controversy because the National Rifle Association is set to hold its annual convention in Houston this weekend, and it’s talked about as “bad form” that the NRA should be in Texas so soon after Uvalde.

But Uvalde isn’t a blot on the NRA’s record. Salvador Ramos wasn’t a member of the NRA. He’s the opposite of the NRA. And what he did is an advertisement for the NRA. The NRA is the organization which would have those parents not be desperate and not be helpless.

They’d be going into that school and the craven law enforcement agencies attempting to hold them back would have had no choice but to act, and to save the lives wasted by their inaction.

Mass shooters don’t seek out gunfights. They seek out opportunities for massacres. They look for soft targets, not hard ones.

Robb Elementary School was supposed to be a hard target. It was supposed to have an armed security officer. It had no such man. It didn’t have locked doors, nor did it have cops rushing in to save it during the 12 minutes Salvador Ramos was outside the school taking potshots at it and a nearby funeral home. Before Ramos decided to saunter in and end the lives of a score of people, that is.

This is the safety the ghouls promise you, if you’ll allow them to degrade and destroy your Second Amendment rights?

This must be a society armed to the teeth and willing to defend itself not just against the Salvador Ramoses and the gang-bangers, but against the ghouls. They must fear us, because if they don’t we are not free.

Uvalde is a terrible atrocity. As terrible is the attempt to use it by those who have no regard for either our freedom or our safety. They must be resisted now, and after the next Uvalde, and the next, and the next after that.

Interested in more news from Texas? We've got you covered! See More Texas News
Previous Article The Wreck Of The Bush Special In Texas: What Happened?
Next Article It’s Hard To See How The New BR Bridge Will Help Traffic