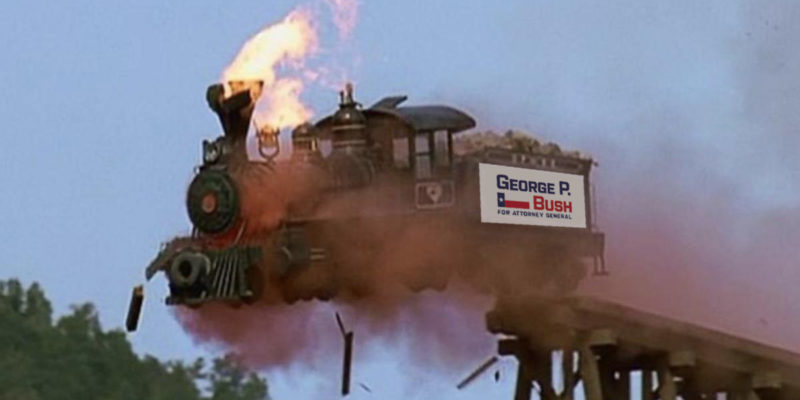 Sometime around 2013 a rather ambitious train rolled into town.

No. 47 the riders numbered this mighty engine, which we’ll call the Bush Special.

Driving the engine were the usual “Bush Inc.” operatives, some dating back to 42’s administration, and their family members, all riding the dynasty to its next inevitable stop.

Behind them shoveling the coal was a small army of loyal workers and supporters. Eagerly holding the shovel were any number of sycophantic insiders, party brass, Bush legacy devotees (41 or 43, and maybe even a Jeb Bush fan or two), and a vast and amorphous crowd of voters with nostalgic feels for the Bush presidencies.

In the rear were any number of young hopefuls, hell-bent on catching a ride with a future governor or even the 47th U.S. President. They stepped over and trampled many friends while attempting to board what looked to be an unstoppable locomotive force riding the rails of the Bush name and politics-as-usual. It delivered “George P.” to the status of top-vote-getter on the 2014 Texas ballot and a steppingstone victory as Commissioner of the Texas General Land Office.

Loyalties and alliances were tested, yet the train easily chugged to a second term in 2018. But staying put in a relatively obscure state agency was not part of the plan. It was time for the Bush Special to hit the rails again in 2022. Duty called.

All that momentum gave way to a spectacle of a crash on Tuesday, Texas’s Primary Runoff day. The last remaining Bush scion was beat by a nearly 40-point spread, 68-32%. That’s what they call in the Lone Star State a whuppin.’

DISAPPOINTMENT OF THE DECADE

Much political engineering prowess and calculus went into divining what the young Bush should run for next.

No one seemed to be budging, and all the statewides from Gov. Greg Abbott to Railroad Commissioner Wayne Christian were staying put. The Bush consultants consorted, crunched numbers, and conspired until they identified who they thought would be the most vulnerable statewide office-holder in Texas.

This particular elected official had numerous lawsuits and internal controversies, making him quite a target for Democrats, moderate Republicans, and Bush strategists alike. Sweetening the deal, this incumbent was a genuine threat to the globalism and moderate politics the Bushies tend to celebrate.

Alas, attempting to unseat Texas Attorney General Ken Paxton became the Bushes’ Waterloo. And this despite starting with a $2.3 million  war chest and airing numerous attack ads hammering Paxton for federal securities rule violations and other seemingly arcane points currently being decided in the courts.

Nevertheless, Paxton delivered on Runoff day. As a twist of irony, the state’s Top Cop became the highest vote-recipient on the 2022 Texas Runoff ballot.

HOW DID IT GO OFF THE RAILS?

If there was ever a political science textbook example of “death by a thousand cuts,” it has to be the Bush Land Office.

First, a very short background on the office. At times operating like a private business, the Texas General Land Office (or GLO or “Land Office”) is arguably the oldest state entity — necessary during the days when pretty much all a frontier state did was dole out land grants and settle property disputes. Today it manages numerous properties and attempts to turn a profit on them, which in turn bankrolls the agency and fills various public education and university trust funds. It is the caretaker of Texas’s coastline and preserver of beaches. Due to its reputation as a trustworthy state entity, it has come to manage not only the state’s military veterans land program but a series of veterans cemeteries and care homes. It maintains an archives division separate from the larger State Archives, specializing in restoring and preserving land maps (of course). If you’re ever in Austin, it’s a good off-the-beaten-path place to schedule a tour.

In recent years the GLO has become the conservator of the Alamo. It was that hallowed shrine of Texas independence that gave Bush his biggest, nationally known headache. Let’s look at several missteps leading up to the Alamo debacle:

We’ll give Bush and his attaches a little credit. They did much to streamline communications, update the look and feel of the GLO, and expand the educational outreach of the office. Bush is a former school teacher, after all. Now he can get back to that and pursue his teaching passion. We would recommend he be his own man on his next career step and not blindly follow the leadings of his family’s handlers.

And as for those who hopped on board the ambition train for no other reason than to serve on “47’s” cabinet one day? You should hope Republican Land Commissioner nominee Dawn Buckingham doesn’t do some spring cleaning of her own (Buckingham will face Democrat Jay Kleberg in November and Green Party fill-in Alfred Molison Jr.). Some apologies to the “Patterson-istas” handed pink slips and illegal severance checks might be in order as well.

As for the GLO, the venerable agency has some patching up to do. With Buckingham, a former state Senator with the favor of the Big Three, it shouldn’t be an impossible task to salvage the wreckage.