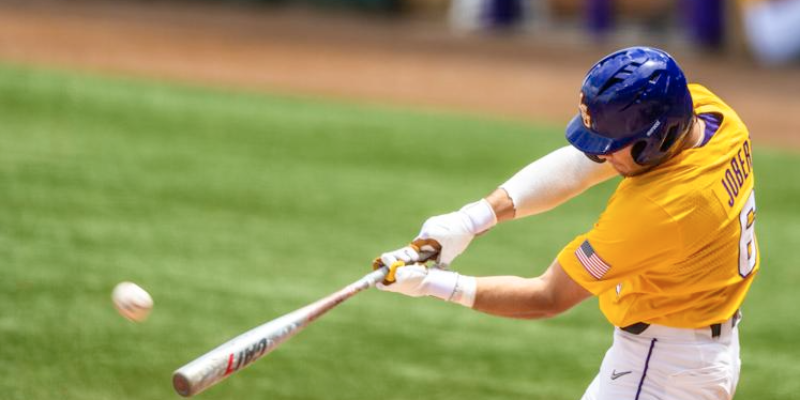 Postseason play in college baseball is upon us. And Brayden Jobert and LSU seem ready.

Voice of the Tigers Chris Blair said it with drama and flair, “…And the Tigers have opened up a can here in the eighth inning!” It was the impeccable response to the latest monster at-bat from LSU’s powerful redshirt-sophomore.

And it all happened with the gold jerseys on.

Consider the can cracked 🧨 pic.twitter.com/n8S3cPRcFI

Jobert was 4-for-6 at the plate Saturday with a school record-tying nine RBI to lead LSU’s 17-hit assault. In addition to the game-breaking grand slam in the eighth, he also launched a three-run homer, a two-run double, and a late triple that nearly cleared the fence again.

With LSU having already scored three runs in the top of the eighth inning to erase a 9-7 deficit, Jobert crushed a one-out pitch from Vanderbilt star reliever Thomas Schultz off the flagpole in center field. It was the signature moment in an 11-run uprising that pulled LSU from the brink of defeat and into its first ever three-game sweep in Nashville.

“Me and coach Chief (Marc Wanaka) had been working on getting my hands a little lower and going more direct to the ball instead of having my hands up high like it was before. There was too much movement in my swing,” said Jobert, who now has 17 homers and 55 RBI on the season. “My hand path to the ball is a lot quicker, so the quicker you are to the ball, the more successful.”

Clad in the “Championship Gold” jerseys for the third game of the weekend, the Tigers simply would not be denied. Down earlier 6-0, 8-4, and finally 9-7, LSU scored 14 total runs over the final two innings to win in a rout, 21-10.

It was a display of grit and won’t-lose attitude that seemed to announce that the crunch-time of postseason play is finally here. The Tigers wore the jerseys for all three games instead of just Sunday, a practice previous LSU coaches Paul Manieri and Skip Bertman employed for different reasons in 2008 and 1996, respectively.

“It’s not so much the gold but the history behind them, as they’re called ‘championship golds,’ and my thought is: We’re in championship baseball,” first-year LSU coach Jay Johnson said. “I would probably have some unhappy players if I decided to change the uniform.”

Most importantly, the Tigers (37-18, 17-13 SEC) secured the all-important No. 4 seed in the SEC tournament with the win and Auburn’s later loss to Kentucky, meaning they will enjoy a bye until double-elimination play begins on Wednesday.

Here is the SEC tournament bracket.

The improbable sweep over No. 11 Vanderbilt capped a roller coaster season, including a low last Sunday when LSU was swept at home by the Ole Miss Rebels after rising to as high as No. 9 in one of the polls.

The sweep in Nashville was the fifth the Tigers have been involved in this season–half of their conference series. They also swept Mississippi State on the road and Missouri at home. They got swept on the road at Arkansas in addition to the series against Ole Miss.

This latest victory came against a Vandy reliever in Schultz who entered the contest with a 1.27 ERA and seven saves. It capped a three-game combined 42-15 stomping of a perennial power, and, when combined with a 19-7 drubbing of Northwestern State on Tuesday, a 4-0, 61-22 week at the ballpark.

It is clear that LSU can open up that “can” at any moment, but it is equally clear that the can can be opened on them. As we enter into the most exciting time of the baseball season, only time will tell which Tiger team shows up.

“Vanderbilt is the gold standard of college baseball right now,” Johnson said, “and to come in here and sweep them is something I’m really proud of.”

We are hoping that Johnson’s “gold standard” comment had just a touch of irony attached to it. We are also hoping LSU’s standard of play over the next month is as gold as it was this weekend. After all, since winning six national titles between 1991 and 2009, the Tigers have been denied for 12 long seasons.

We are hoping LSU can.

Interested in more news from Louisiana? We've got you covered! See More Louisiana News
Previous Article What Matt McMahon Did In His First Two Months On The Job Is Incredible
Next Article SADOW: It’s Voting-Strategy Time For Shreveport Republicans