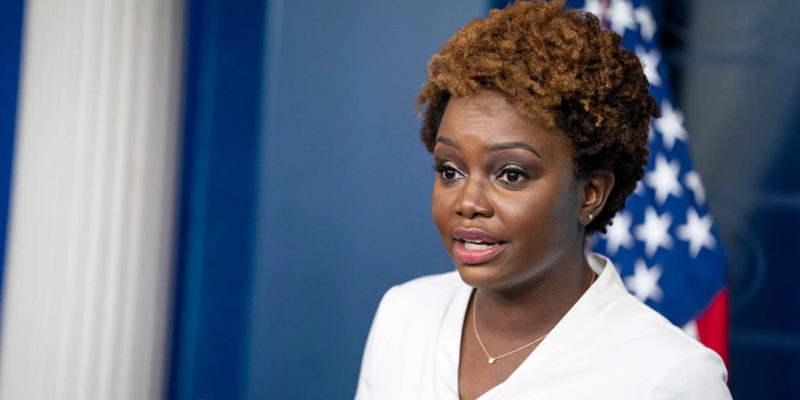 We bring you Karine Jean-Pierre, the brand-new Biden press secretary who got the job replacing soon-to-be-MSNBC host Jen Psaki (and won’t that show be a hoot and a holler?) as the podium-dweller at the administration’s daily briefings not because she’s particularly talented.

We’ll establish that pretty clearly below.

Jean-Pierre got the job for three reasons.

First, she’s black. For a Democrat Party which has established itself as committed to destroying as much of the “old white patriarchy” as it can, only to have as its current avatar a doddering, shriveled, sexually-harassing politician of pallor with a long record of racist statements under his belt, there must be as many members of minorities possible visible to the public to represent the Biden administration.

Second, she’s a woman. The press secretary has been female for basically a decade, so it’s not a particularly noteworthy fact that Jean-Pierre is a woman. But Joe Biden is not going to have a man as his press secretary. Unless it’s a man with a vagina, perhaps.

Third, she’s queer. Jean-Pierre isn’t just a lesbian, she’s got a main squeeze who is….a member of the media. She’s the “partner” of CNN anchor Suzanne Malveaux, who’s been covering American politics for decades. But Malveaux has been apparently taken off the politics beat now that Jean-Pierre has this job, so you can be assured there’s no conflict of interest or inside dealing going on.

The fact that Karine Jean-Pierre has been a Democrat operative and Obama stooge for years, coupled with the three affirmative-action trophies above, meant it matters none at all that she has absolutely no talent whatever for the job of White House Press Secretary. She was getting it, and the American people would have to deal with the consequences.

Except it looks like it’s Team Biden who’s going to have to deal with the consequences. Especially if this is what it’s going to look like.

It didn’t really get better on her second day…

So essentially, what we have is this as our press secretary…

It isn’t like this is going to be much of a change. When Psaki would be asked a question she’d lie and dissemble in an obvious way, too, and what you’d see on top of that was a thick layer of condescension and contempt. Like for example when, asked about the supply chain disaster the administration’s incompetence and stupid policies caused last year, she sarcastically referenced the late delivery of Pelotons.

Maybe as Jean-Pierre gets more comfortable she’ll develop that and turn bitchy the way Psaki did. But that might take a while. So far she seems to be in so far over her head that showing any kind of command of that podium, even the bitchy kind, might be beyond her capability. And she also seems like she won’t be in that job long enough to change it.

Not that they’ll replace her with anybody better. The Biden administration isn’t capable of hiring competent people to do important jobs. It couldn’t even give us a president or vice president with a basic degree of competence, much less a press secretary.