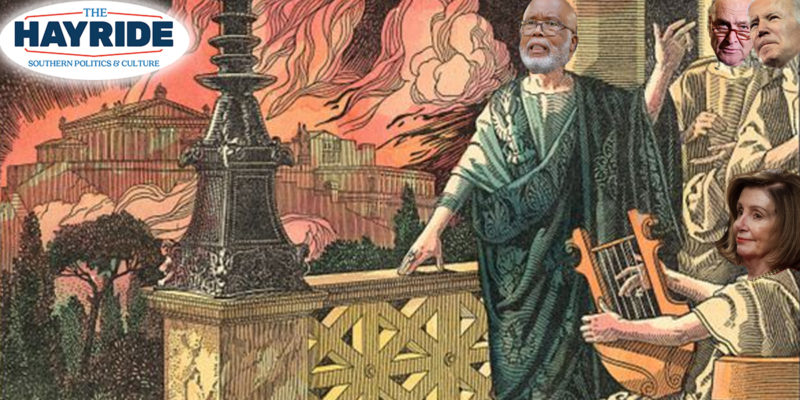 Running a Francis Gary Powers show trial on prime-time TV, that’s what. All three dinosaur broadcast networks carried the Nancy Pelosi-Bennie Thompson January 6 kangaroo court show last night, in which for two hours some of the dumbest people in government attempted to convince a yawning public that Donald Trump was attempting to foment a revolution using unarmed plumbers and real estate agents on the National Mall. Apparently, this is what will solve the worst inflation since 1981.

Prices faced by U.S. consumers rose 8.6 percent in May, defying expectations that inflation had peaked in March and indicating that the Federal Reserve’s task of bringing it back under control will be more challenging than officials anticipated.

This is the twelfth straight month of inflation above 5 percent.

Excluding food and energy, prices were up six percent compared with a year ago, more than the 5.9 percent anticipated. On the month, prices rose 0.6 percent, matching last month’s gain and beating the expectation for a slowdown to 0.5 percent.

You would think these people would be doing everything they can do mitigate this problem before it gets any worse, even if that means putting the federal government on a starvation diet and doing everything they can do to get people off the welfare dole and into productive work, not to mention getting American manufacturing and raw materials production – including oil and gas – going to increase the amount of supply in the economy.

Instead, we get trained simps like “Republican” Liz Cheney dancing to the organ grinder’s music…

LIZ CHENEY: "On this point there is no room for debate…President Trump summoned the mob, assembled the mob, and lit the flame of this attack." pic.twitter.com/YWTJ1DFuWI

January 6, 2021 was almost a year and a half ago, and the public has long since lost whatever outrage we might have felt about a mostly-peaceful protest which was less destructive than most of the hundreds of Democrat Party-sanctioned George Floyd riots which took place in cities all over the country.

If there’s anything to be scandalized about where January 6 is concerned, it’s this…

The FBI arrested Republican Ryan Kelley, a candidate for Michigan governor, on Thursday for misdemeanor charges in connection with the Jan. 6, 2021, U.S. Capitol riot by supporters of then-President Donald Trump.

An FBI agent’s sworn statement said Kelley, 40, was captured on video standing in a crowd of people who were “assaulting and pushing past law enforcement officers” at the Capitol.

Kelley is one of five people seeking the Republican nomination to challenge Democratic Governor Gretchen Whitmer in a November election. He serves as an appointed planning commissioner in Allendale, Michigan.

In a recent opinion poll cited by local media in Michigan, Kelley emerged as the leading Republican candidate, though the race remains fluid with 49 percent of Republican voters still undecided.

His campaign did not immediately respond to a request for comment. The primary vote to select a Republican nominee is scheduled for Aug. 2.

The arrest coincided with Thursday’s first of a series of televised hearings of the Democratic-led House of Representatives Select Committee investigating the attack on the Capitol.

Smell that? That’s the smell of fascism.

They could have arrested Kelley at any time in the last year and a half, and they waited until the day of their stupid prime-time Soviet kangaroo court spectacular to haul him in.

This is to appease the losers and bots on Twitter while real Americans are throwing their hands up trying to figure out how they’re going to pay the bills, and how they’ll explain to the kids that it’ll be a summer staycation this year and no, the new XBox isn’t likely this Christmas.

We are governed by people who suck. And they suck harder all the time.

November is coming. It can’t get here fast enough. Even a massive GOP blowout won’t fix this, but it will at least impose some sense of accountability on the monsters and morons afflicting our body politic.