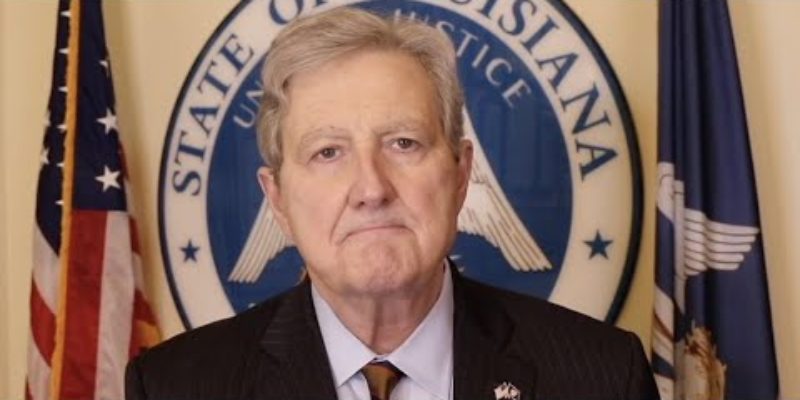 John Kennedy has been on a roll lately, which perhaps is to be expected given that he’s up for re-election this fall. Kennedy was never in danger of not being re-elected; not like Bill Cassidy, who’s essentially hated even by the people who voted for him in 2020 (you get that when you cheerfully betray your voters and then attempt to lecture them). But Kennedy is a master of sound bites, which is a crucial piece of modern political success, and he’s dropping nukes the last few days.

For example, there was this appearance on Jesse Kelly’s show Tuesday…

Sen. John Kennedy (R-LA): "In my state, the price of gas is so high that it would be cheaper to buy cocaine and just run everywhere." pic.twitter.com/1rBzyYXo0W

And there’s this statement from this morning…

We haven’t seen any polling on the race lately, and we wouldn’t expect to see any for a while. Nobody is going to spend money polling a race like Kennedy’s this early; everybody knows Kennedy is going to pull 55-60 percent of the vote in the primary and win the race, and the real question is what the breakdown of the other 40-45 percent of the vote will be between Gary Chambers and Luke Mixon. If it’s 30 percent for Chambers and 15 for Mixon, or 30-10 with Kennedy getting to 60 percent, it might be the end of white Democrats getting any momentum in statewide races in Louisiana for a long time, if ever, and Kennedy will have had a hand in reshaping Louisiana politics for the better.

But he’s not talking about Louisiana politics, of course. Kennedy’s talking about Joe Biden. He’s talking about what Biden’s awful policies are wreaking on ordinary folks. Inflation is the most obvious and pressing manifestation of that, of course, but not the only one.

And Kennedy’s proposed solution to get rid of inflation isn’t a bad one, though he’s leaving out some of the more complex parts of the equation.

Yes, the federal government needs to stop spending money. In fact, it’s got to go on a massive austerity kick. For example, Louisiana’s economy is shrinking, or at best at a standstill, and yet in the state’s big cities there’s now a significant labor shortage. The only explanation for that is welfare – you have way too many people on the dole and not in the labor force. It doesn’t help that the state’s population is shrinking pretty rapidly and the people who are leaving are coming out of the labor force rather than the welfare rolls. Welfare recipients aren’t geographically mobile, even though they ought to be (if you’re on welfare and you’re able-bodied, what you need more than anything else in life is a fresh start and a new environment, because the one you’re in obviously doesn’t work for you).

And absolutely, Biden needs to make a 180-degree reversal on energy policy and go from supporting this moronic Green New Deal garbage agenda to making it a national priority to achieve energy independence not just with fossil fuels but with nuclear energy as well. Having a massive influx of transportation fuel on the market, not to mention a much more robust power grid, would do wonders to tame inflation. Fuel costs are a driver of the cost of goods, not just a drain on household finances. And manufacturing in the modern age depends on having power to run the machines which make things, so when the light bill goes up it affects the cost of everything the factories make.

Lower electric costs might help rejuvenate domestic manufacturing and reopen some factories, which could ease the supply chain problems and bring costs down.

Biden will do none of those things. But even if he did, it still might not solve the problem.

Why? Because we’re in a “doom loop” economically thanks to atrocious management by the Biden administration and the federal reserve. A couple of weeks ago at American Greatness, Adam Mill described the painful disaster these clowns have created…

Let me walk you through some of the math.

Inflation closes the gap between money earned and money spent. Since the financial crisis of 2008, the Federal Reserve expanded M2 money supply from just under $8 trillion to around $22 trillion today. During that time GDP has increased from around $14.6 trillion to around $24.5 trillion today. We’ve gone from a ratio of one dollar chasing $2.20 in goods in services to an almost 1 to 1 ratio today. Inflation during the same period, according to the government, has eroded the dollar by a mere 33 percent.

You think 8 percent inflation is high? Prices need to double to restore any semblance of balance between currency and the things you can buy with currency. We have a long way to go.

To understand how dire the situation has become, we need to review a curious practice the Fed began shortly after the 2008 crash. In November 2008, the Federal Reserve began an extraordinary program of purchasing mortgage-backed securities (MBS) Using newly created money (not tax dollars or private investments), the Fed dumped billions of dollars per month with the stated goal of helping the government stimulate the economy.

Mill notes that the Fed has absorbed all that toxic MBS paper which tanked the economy in 2008, containing the market contagion but getting the federal fisc sicker and sicker along the way, leading to an inexorable disaster…

The sheer scale of the Fed’s involvement in the mortgage market caused an unstable bubble. As the president of the Kansas City Fed recently said, “by owning roughly one-quarter of the MBS market along with a significant portfolio of longer-term Treasuries, our presence in financial markets muddies price signals, encourages excessive risk-taking, and can foster financial instability. Asset prices remain historically high and remain vulnerable to economic and policy uncertainty.”

In other words, lenders don’t need to worry about lending to risky borrowers because the Fed is buying all the crap nobody else will touch.

Although the Fed promised it would stop buying mortgage-backed securities by March of this year, the promise came with a giant asterisk. As old bonds mature and disappear from its balance sheet, “monthly purchase schedules will continue to be issued to reflect reinvestment of principal payments . . .” In other words, when the Fed receives a dollar from an MBS payout, it just uses it to buy another bond.

Thus, in the face of red-hot inflation, the Fed bought another $38 billion in mortgage-backed securities in March. In April, it bought another $40.1 billion. This month, the Fed is in the process of buying another $34.5 billion.

Until recently, the Fed has been on an unprecedented buying spree. It increased its total MBS holdings from $1.7 trillion in 2020 to $2.7 trillion today. Indeed, the Fed made roughly $400 billion of those purchases after its chairman’s June 2021 testimony in which he famously labeled 5 percent inflation “temporary.” It was obvious then that inflation was just getting started.

So all of this might seem like terrible news. But it’s nothing compared to the doom loop that has begun to turn. The coming reckoning could be savage and apocalyptic. Let’s walk through what might happen next.

The problem with inflation is not just how high it is, it’s how quickly it is increasing. Again, the money supply has increased so much that prices would have to almost triple to restore balance between goods and the dollars chasing them. So the Fed’s mandate requires it to intervene to stop inflation. It typically does that by raising interest rates and selling back its bonds. When the Fed sells a bond, the cash flows out of the economy relieving the inflation pressure.

But in this environment, raising interest rates will cause a cascade of problems. The higher interest rates will slow the economy and cause unemployment. It will also swallow up tax revenue as the government has to pay interest on its massive debt. But more critically, it will increase the rate of default on home mortgages. Those defaults will make mortgage-backed securities less valuable and more unpredictable. That’s how the 2008 housing market seized up.

The more the Fed props up the mortgage industry, the more it encourages inflation. The more inflation increases, the more urgent it becomes to stop printing money. When the printing press stops and interest rates rise, those MBSs likely will turn toxic again, freezing the market at the exact moment the Fed needs buyers for its bonds.

Alternatively, the Fed could just let inflation rip as it continues to pour gasoline on the fire. At this point, the latter scenario appears more likely as the Fed engages in half-hearted symbolic inflation-fighting measures. Not surprisingly, the inflation numbers get scarier and scarier. At some point, runaway inflation will force the Fed to take real action. One thing is certain: the longer it waits, the more it will hurt.

So while Kennedy is explaining the inflation problem as a function of Biden blowing $2 trillion we didn’t need out of the treasury and dropping it from helicopters onto a marketplace which was already in recovery mode, which is correct as a means of explaining part of the problem, Mill says that isn’t the half of it.

The federal government is propping up the housing market by underwriting lots of marginal, if not sketchy, mortgages through its MBS purchases, while at the same time printing a ridiculous amount of money to fuel a false economy and grease the way for colossal budget deficits and free cash for everybody.

Now we’re paying for that in a debased currency and inflation through the roof, with a severe threat of losing the dollar as the world’s reserve currency and the economic collapse that will create.

And it can’t be avoided without a structural change in our national public fisc. Because if you tighten things by raising interest rates to the levels necessary to stop this inflation, it’ll do two things. As Mills notes, not only do higher interest rates mean far more cost associated with servicing the federal debt, because Uncle Sam is the world’s biggest borrower and interest on our national debt is now a significant part of the federal budget, but higher interest rates mean a whole bunch of those mortgages the Fed is invested in through buying up that MBS paper will carry much higher monthly notes and the people paying them will default.

And that means a housing collapse the Fed will be on the hook for.

Most people have no clue this is happening. But the clowns at the Fed did, and yet they spent last year telling us that inflation was transitory.

It isn’t. And what’s about to become unmistakable for Americans all across the country is we’re about to pay the piper for all of the bad policies and stupid decisions our so-called leaders have faced.

Kennedy’s correct about inflation, and he’s certainly correct in complaining about it. He should get credit for that. But we shouldn’t kid ourselves that a good outcome in the 2022 midterms is going to solve the problem. We’re going to be at this for a decade, and that’s going to depend on having people far better than Joe Biden in charge.