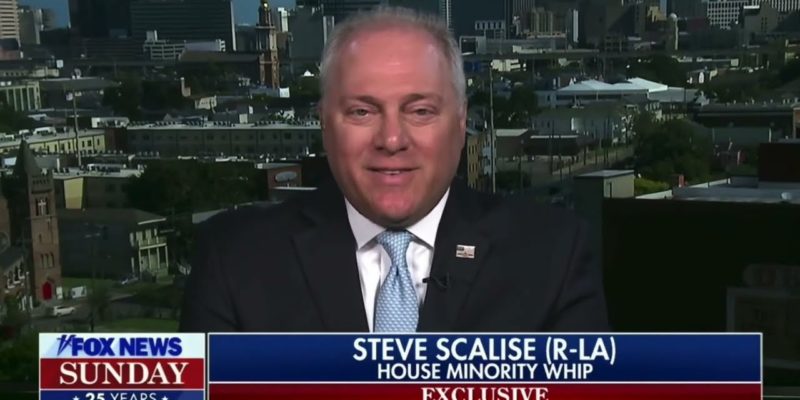 Scalise knows what he’s talking about, and not just because he’s conversant on the issue. Scalise was almost killed in 2017 when a crazed Bernie Sanders volunteer named James Hodgkinson who took the latter’s exhortations about the necessity of a “political revolution” to their logical terminus a bit too seriously and attempted to assassinate the GOP’s congressional baseball team. Scalise got shot in the hip and almost bled out due to the damage the bullet did. He spent weeks and months recovering and had to learn to walk again.

To this day Scalise has maintained an adult perspective about his ordeal, something which seems inordinately rare in today’s childish, emotionalist climate. He doesn’t blame Hodgkinson’s gun for Hodgkinson’s actions, and he also doesn’t blame Sanders’ stupid Leninist rhetoric for inciting the lamebrained would-be assassin to violence (something Scalise would be very much entitled to do, particularly given that Sarah Palin was to be blamed for the shooting of Gabby Giffords by the insane Jared Loughner).

And for 10 minutes in this clip Scalise knocks down one nonsense argument after another about gun control, noting that all of these laws Democrats insist on passing have already been struck down in the courts where they’ve been tried, the gun laws already on the books are routinely ignored as the government fails to enforce them, the places where gun crime is the worst tend to be the places with the most restrictive gun laws, there was an incident just recently in West Virginia where a woman with a concealed-carry permit took down a would-be mass killer with a handgun and violence – not just gun violence, but violence – is an epidemic problem in an America which no longer lets law enforcement do its job while at the same time fraying badly at the edges of its culture.

He’s correct in everything he says, and the fact that Scalise can’t convince any Democrats in the House to listen to him is much less an indictment of his arguments than it is a statement about the fact that the Democrats don’t want solutions – they want the gun issue in order to have a leg to stand on this fall.

The response to this by Republicans on Capitol Hill must be “no.” But that doesn’t appear to be what’s happening. In the Senate they’re contemplating a surrender on gun control, something which would be a colossal, stupid mistake.