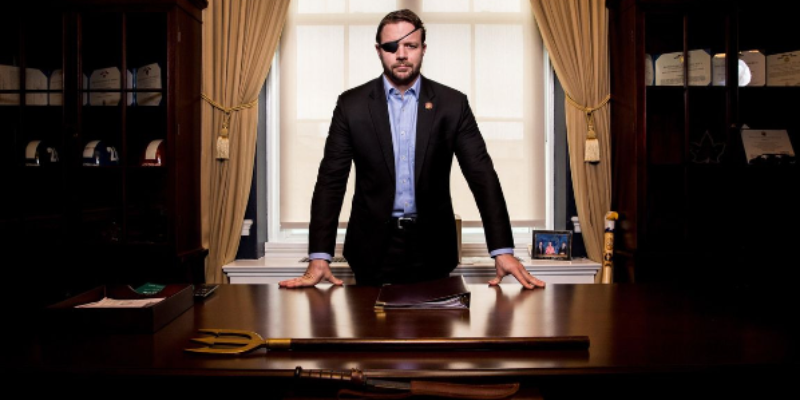 Texas Congressman Dan Crenshaw has had a rough go of it in 2022. The latest news involves a confrontation with an angry group of citizens not happy about the Republican Crenshaw’s representation of We the People.

A cursory understanding of him had me liking Crenshaw when I started to follow his career, but a photo (see above) depicting him as one of Klaus Schwab’s Forum of Global World Leaders made me take pause–especially when I saw some of the other names from the 2004 forum, particularly one Mark Zuckerburg (DARPA cancelled the US military’s LifeLog project on the same day that the Zuck launched Facebook on the World Wide Web: February 4th, 2004).

By the way, when I saw the news about him being part of Klaus Schwab Young Leadership Summit, I went and checked and you could search his name. They scrubbed it. Tulsi Gabbard still up but Dan Crenshaw was removed. Lots of us have the photos of him on website. pic.twitter.com/FGhPORFg9D

I say this about Facebook because we know what the social media site was to the American patriot in 2020–a Big Brother, fact-checking, censorship machine that, I believe, will soon meet the same fate as Twitter. So, that pivotal year 2020 is when I first saw that Crenshaw was affiliated with one of the most notorious globalists in our world, World Economic Forum chairman Klaus Schwab, who is into, you know, meaningless, conspiracy theory-type things like world domination and depopulation. Nothing too serious to discuss in the mainstream. “Useless eaters,” he dubs persons to remove from planet Earth. Read this article or take note of the screenshot below, which is taken from a book written by Schwab, if you want to know about Schwab and the World Economic Forum. 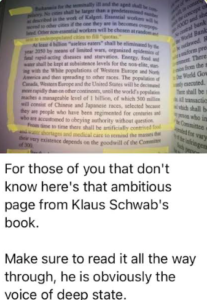 See, if you are a Republican lawmaker from Texas, these are the types of things and individuals you don’t want to be even remotely affiliated with. And even if many Americans don’t know about things like LifeLog and the workings of the WEF (you do now), they certainly are seeing enough in the mainstream media to turn a more discerning eye to Crenshaw.

Over the weekend at the GOP convention in Texas, Crenshaw was, shall we say, verbally confronted by protesters fed up with the DC swamp. From the NY Post:

The Texas Republican was berated as “Eyepatch McCain” and “a globalist RINO [Republican in name only]” by conspiracy theorist podcast host Alex Stein, who jostled with members of Crenshaw’s entourage at a Houston convention center, footage posted by Stein and others showed.

As other people followed the group and shouted things like “You sold us out” and “You’re a traitor,” Stein was involved in a skirmish with Crenshaw’s team. A man in a tan suit was pushed against a wall during the incident and stumbled backwards.

“You’re giving Ukraine all this money, and red flag laws too, Dan?,” a Twitter user named Alex Rosen asked the 38-year-old congressman as he was ushered through a lobby by a uniformed officer while walking with several other people, footage showed.

I CALL OUT DAN CRENSHAW FOR HIS WORLD ECONOMIC FORUM INVOLVEMENT AND SELLING US OUT WITH @Ccampbellbased #WEF22 #texasgopconvention pic.twitter.com/H4ECF13crK

As the confrontation continued, the content creator called Crenshaw a “fraud” and a “World Economic Forum sell-out.” “Klaus Schwab is literally your daddy,” the heckler said, referencing the executive chairman of the World Economic Forum.

As an aside, here is a tweet from Alex Rosen working to exonerate himself from the rash of headlines put out there by the mainstream media:

This video by @Ccampbellbased fully exonerates myself and exposes the lies of @Mediaite and the rest of the mainstream media running cover for @DanCrenshawTX pic.twitter.com/OomXu6gjln

The verbal assault on Crenshaw was obviously colorful and creative. It pretty much covered everything American patriots are starting to realize about his kind in DC….

Hop over to the new RVIVR.com for the rest of this informative article, and while you’re at it, start following on social media our explosive new website about reviving American patriotism!