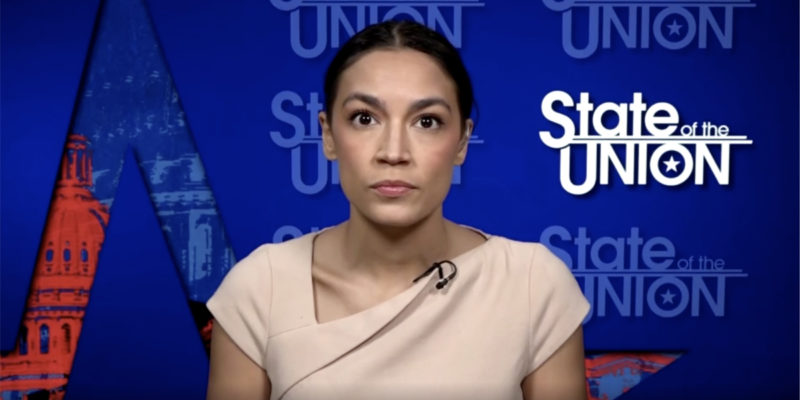 “There is no greater tyranny than that which is perpetrated under the shield of the law and in the name of justice.”

One of the many things that I noticed about AOC is that she’s such a drama queen.  She can play it up when she wants. She gets offended and the New Yorican comes out of here. She runs her mouth a million miles per hour. So it comes as no surprised when confronted on the capitol steps by a “far-rightwing troll” that she was highly offended. AOC was so afraid for her life that she “was actually walking over to deck” the troll. This made news. That somebody yelled out to AOC that she’s a “Big booty Latina” with a big smile actually made news. That AOC was offended made news.

Where was AOC’s comments when first Lady Jill Biden called Latinos “Tacos” and talked about “bodagas” as if bodegas only exist in the Bronx? Where was AOC to criticize the treatment of the daughter of Mayra Flores when Nancy Pelosi elbowed her out of the way? It clearly wasn’t an “I love tacos” moment for Pelosi, yet AOC was nowhere to be found. Pelosi could have simply apologized politely with a simple explanation “I’m sorry you felt that way” or, “I apologize if I unintentionally elbowed”, but no, we get an explanation that it was for the child’s own good or something. Perhaps the real issue that AOC took with being heckled wasn’t that she was called “big booty”, but rather, that she was called a “Latina.”  AOC is LatinX, she’s so Latin X she thinks Cornhuskers are people who help make tamales.

Still, there’s something worrisome when this traumatic event that AOC had to experience scared her so that she almost assaulted her heckler. Seems a little violent, even by AOC’s standards, doesn’t it? Her life was not threatened, her physical well being wasn’t threatened, her heckler kept his distance, and yet she felt the need to almost assault the heckler? I suppose if we look back we’ll see a trend of Democrat violence from well, AOC’s side of the Aisle. Whether it was during Democrat Andrew Johnson’s administration of riots in New Orleans, Opelousas, and the formation of the KKK in his home state or bombing of the U.S. Capitol by radical leftists in 1983, the Left has a proclivity to resort to violence. Of the four Presidents that have been assassinated, 3 of them were Republicans, while the fourth was a Democrat. McKinley was shot by an “anarchist”, while Lincoln was shot by Democrat John Wilkes Boothe. Garfield’s fate was sealed because of a crazed man, while Kennedy’s assassin, Lee Harvey Oswald was a Socialist. There are the “conspiracy theorist” who would argue that Oswald didn’t kill Kennedy, but we’re not rehashing that. Still Kennedy was the only Democrat President assassinated and it was done by a Lefty.

There has always been some level of political violence, but politicians are quick to condemn violence, especially when it is violence coming from their own side. At least the smart ones are. When John Wilkes Booth assassinated Lincoln, he believed once he crossed into the South, he’d be welcomed as a hero. What he found was despite Lincoln’s unpopularity, Booth’s allies were no more. Violence usually backfires, turning the assailants into pariahs while immortalizing the victims.

There is one group that has been known to use violence for their ends, the people of the underworld, the mafia. They are going to get their way, and if you stand in their way, you’ll get eliminated. Even they were smart enough to distance themselves from their own violence. But that brings us back to what seems to be happening in politics. It seems to me, AOC wasn’t complaining about being called a “big booty Latina”, she was calling on her minions to target her heckler. She isn’t defending her Latin roots, as evidenced by her absence on the border crisis, or even with Pelosi’s elbow or Jill’s “Taco.” And while you may scoff, it isn’t just AOC.

Elizabeth Warren was asked if the political violence has gone too far. Instead of distancing herself and condemning all violence, she ducked into her car and drove away. Not even so much as the common courtesy- no, not even the common intelligence to separate herself from the violence. It’s as if the message was sent to her supporters, do what you need to do. Obviously if something does happen to one of the Supreme Court justices, Warren would be the first to the mic to condemn such actions, but she won’t act before it does. She won’t condemn before something happens.

This plague of guttersnipes isn’t just infecting the halls of congress. Throughout the nation, D.A.’s are choosing to not prosecute crimes. In Los Angelos, D.A. George Gascón is under recall for his lack of prosecution of criminals. One has to wonder, is Gascón doing what he honestly believes is in the best interest of law & order, or does he have more nefarious intentions. Could it be that Gascón is building an army of reprobates all which owe him a favor?

Perhaps this plague began when the Bernie BROwnShirts used physical violence into intimidating Democrat primary voters into voting for Bernie. While it didn’t successfully get Bernie the nomination, it did successfully push the party from a more moderate party to a party that is ran by leftist. Perhaps the lesson was learned then that violence is their answer. That the way to rule isn’t through diplomacy, debate, and exchanging ideas. Instead, it’s to rule the country as the mafia would, with offers that we can’t refuse, and if you dare, do so at your own risk.

This is the Jackass Mafia that now rules the Democrat party.