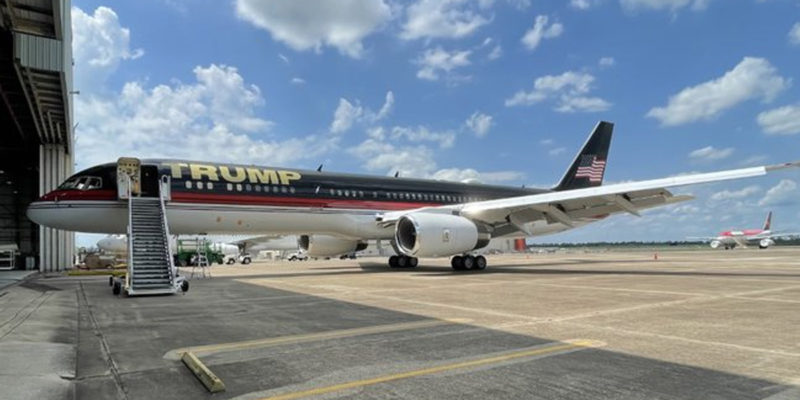 In a sign that he is about to announce another presidential campaign, Donald Trump  released a video this week of his awesome Boeing 757 being refurbished. This is the airplane he used to campaign during his successful 2016 election. According to Trump, “Now it has been completely modernized and renovated, and looks GREAT, all done in the Great State of Louisiana, and coming back to the skies in the Fall of 2022, or maybe sooner. Get ready!”

Americans are definitely “ready” for the return of Donald Trump to the White House, especially after 18 months of the worst presidency in United States history.

Under President Trump, gas prices and inflation were low, and the country was energy independent. Trump was able to rebuild our military, keep our enemies in check, fight back against China by instituting tariffs, negotiate four historic Middle East peace deals and provide a measure of border safety as a wall was being constructed.

All this progress was reversed under the administration of President Joe Biden, who is doing the bidding of radical leftists in the Democratic Party. As a result, Biden has implemented “green” energy policies by focusing on renewables and electric cars, while penalizing our domestic oil industry.

He canceled the Keystone XL pipeline, instituted a moratorium on drilling on federal land and offshore, canceled drilling in the Arctic National Wildlife Reserve, removed incentives for new drilling, and rejoined the Paris Climate Accords.

These policies have caused record inflation and gas prices and our country is once again dependent on foreign nations for our energy needs. Instead of taking responsibility for his actions, Biden demonized our oil and gas companies and even blasted owners of gasoline stations, even though many of them are small business owners struggling to survive.

Biden is trying to turn the military “woke,” which is certainly a factor in the recruitment problems facing all the branches of our Armed Forces. It is little wonder that our enemies are causing problems once again.

Iran is getting ever closer to developing nuclear weapons and threatening stability in the Middle East, a region that is facing ever increasing turmoil. Instead of standing up to China, the Biden administration is on the threshold of removing the tariffs instituted by President Trump.

After inheriting a secure border from President Trump, Biden has created total chaos. He immediately stopped construction of the border wall, ended the “Reman in Mexico” policy, and reinstated the horrific “Catch and Release” policies. The result is that over two million illegal immigrants entered the country last year and this record will be easily surpassed this year. The open border has allowed the importation of illegal drugs to skyrocket, contributing to the record number of drug overdose deaths in our country.

While these problems are growing, the Biden administration is curiously out of touch with the concerns of average Americans. As a new poll clearly showed, by a wide margin, the most important issues for Americans are the economy, inflation, gas prices and everyday bills such as groceries. An astounding 63% of Americans rank economic issues as the most important concern for their family.

Despite the outcry from their voters, President Biden and the Democrats are focusing on abortion, gun control, the war in Ukraine, and the January 6committee. This may be the biggest disconnect in modern American history between a political party and the voters who are supposedly being served.

The same poll showed that 88% of Americans believe the country is on the “wrong track.” No wonder, millions of Americans are clamoring for the return of Donald Trump to the White House.

As evidence, his rally in Anchorage, Alaska on Saturday night was jammed packed with supporters with a huge crowd arriving early. The President’s rallies are always well attended, but this one was especially raucous. He was greeted like a rock star with a three-minute standing ovation. At this point, people are desperate for good news and President Trump is delivering hope that he may return for another presidential run.

The desire for another Trump term is happening despite the relentless campaign from the Democrats, the media, the Deep State, and establishment Republicans to destroy him. He survived an unfair and biased two-year Mueller investigation, two bogus impeachment witch hunts and is now undergoing a show trial, a kangaroo court, known as the January 6 committee.

Despite the best efforts of the Trump haters, most Americans, 62%, have not watched these hearings, even though they have been broadcast multiple times on cable and news broadcast networks.

The American people are becoming more accustomed to the biased news media and are discounting their non-stop Trump bashing. While the Democrats will continue their campaign to prevent President Trump from running again and may even try to charge him with a crime or arrest him, it will do little to dampen the desire of the American people for him to return.

With Biden’s popularity crashing to a new low of only a 30% approval rating, it is not surprising that he is losing to President Trump in the latest polls.

As rally goers noticed on Saturday night, President Trump is a vibrant and energetic man who is in command of his audience. Sadly, Biden is old and frail and mentally incompetent.

President Biden is unable to articulate clearly without making mistakes. His speeches are usually garbled. This is not what the American people want in their President. They want President Trump back!

Interested in more national news? We've got you covered! See More National News
Previous Article BLANCO: Besides Just Going To Vote, What Will You Do?
Next Article ALEXANDER: U.S. Supreme Court Attempts To Re-establish Our Constitutional Republic