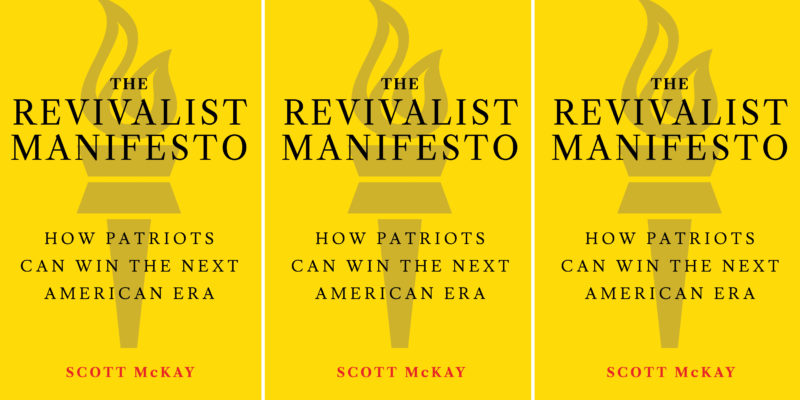 Sometimes your cup runs over. And this is one of those times. Yesterday evening the Republican Party of Louisiana put out its periodical online newsletter, and the current edition contains a quick endorsement of The Revivalist Manifesto. We thought we’d pass it along…

LAGOP readers by now know all about Scott McKay, Louisiana’s most prominent conservative political writer, from his work at The Hayride and The American Spectator. But Scott has just come out with a brand new political book, The Revivalist Manifesto, which we highly recommend. It’s a no-holds-barred assessment of where we’ve been as a country and where we are now – pointing out the successes and failures not just of the Left, but also of the Right.

But there is more to The Revivalist Manifesto, and more indeed than the fact it’s a spirited, often hilarious read. It’s a hopeful, optimistic forecast for a new political era in America, one in which the Woke Left no longer holds sway over our culture and politics, an America which has moved beyond the failed policies of the welfare and regulatory states and an America which retakes its place as the world’s leader in pursuing individual freedom and the civil society.

If you have any doubts about the future of America, this book must be on your summer reading list! We encourage all of our members to read through it cover to cover. Pick up your copy at Amazon here: https://www.amazon.com/dp/1637585349

Also, feel free to check out Scott’s new national political site at RVIVR.com for more about Revivalism, which Scott describes in The Revivalist Manifesto as “conservatism on offense.” We could certainly use a good bit of that.

As one good turn deserves another, sign up for the LAGOP newsletter here.

Additionally, assuming you’re interested in the book, on Wednesday its author and Melissa Mackenzie, the publisher of The American Spectator, did a quite interesting Zoom conversation about The Revivalist Manifesto, the concept of Revivalism and the future of the conter-right movement as it relates to the nation at large. The interview runs about 69 minutes and goes by quite quickly; see it here…

Pick up The Revivalist Manifesto on Amazon.