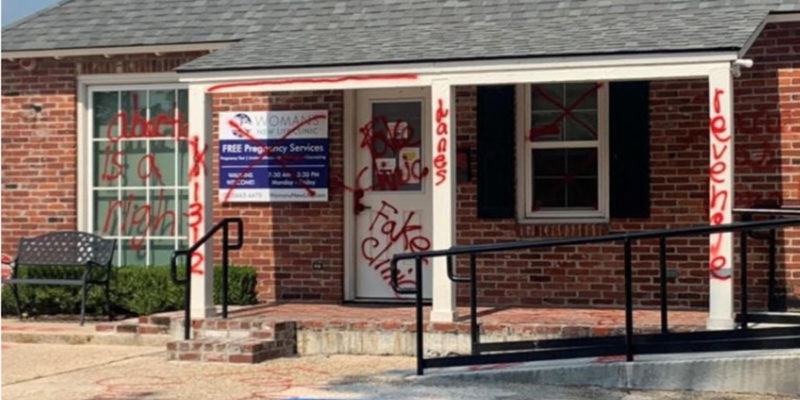 WBRZ-TV in Baton Rouge has a story we find plenty irritating. The psychotics of the pro-abortion movement have carried their war against women’s clinics who provide support for having children to a center in Louisiana…

A women’s clinic was allegedly vandalized and spray-painted by a pro-choice group.

The Women’s New Life Clinic in Baton Rouge was painted in bright red with messages such as “abortion is a right” and “fake clinic.”

It is unclear if police have launched an investigation into this incident.

For more, we’ll share a press release by Louisiana Right To Life…

This morning, Woman’s New Life Clinic in Baton Rouge was attacked allegedly by Jane’s Revenge, a dangerous pro-abortion group that targets pregnancy centers. The group is responsible for other attacks across the country including arson and firebombing. The messages, pictured above, plastered on the building included the number “1312” and the phrase, “ACAB,” which is an acronym for “All Cops Are Bastards.” The messages also included the words “abortion is a right.”

Allison Millet, CEO of Woman’s New Life Clinic, said the following on the damage to the Baton Rouge clinic, “While we are saddened by the attack on our Baton Rouge clinic, we are most devastated that the damage will hurt our ability to serve women. We have already seen this morning how these threatening actions have impacted patient appointments. Women visiting our clinic are looking for assistance in their moment of need. We call for peace and respect so we can focus on serving the needs of women in southeast Louisiana.”

Benjamin Clapper, Executive Director of Louisiana Right to Life, said on news of the attack, “It is evident through this attack, and others like it, that pro-abortion groups lack genuine care for women in crisis. Their answer is always more abortion at all costs. By perpetuating violence, they directly violate the women they claim to help by harming the ability of clinics like Woman’s New Life Clinic from helping patients with essential support for their family. Woman’s New Life Clinic serves women with life-affirming solutions rather than victimizing them further through the violence of abortion. It is a disgrace that any group, regardless of their position on abortion, would harm women with their destructive behavior. We call on local law, state, and federal law enforcement to investigate this matter and hold the perpetrators accountable in order to prevent further violence.”

Jane’s Revenge is the terrorist group which has been vandalizing and firebombing abortion clinics ever since the leak of the Supreme Court’s Dobbs decision in May. Since the feds don’t seem to have any interest in reeling them in, it stands to reason that they’ll be perpetrating these attacks across the country.

It particularly isn’t a surprise that Louisiana would be the scene of something like this given the unhinged mob of baby-killers who descended on the courthouse in New Orleans when a district judge tossed out the temporary restraining order which had kept the abortion industry in the state on life support. We would have expected those vulgar, screeching loons to find a care pregnancy center in the Big Easy to vent their fury on rather than one in Baton Rouge, but whatever.

Now that it’s happened here, it’s time for East Baton Rouge Parish district attorney Hillar Moore, whose office has gotten very tame about non-lethal crime of late, to step up and do something.

We wish we had more faith that would happen.

Interested in more news from Louisiana? We've got you covered! See More Louisiana News
Previous Article SADOW: Louisiana Is Poised To Become America’s Most Pro-Life State
Next Article And OF COURSE Another Democrat Judge Gives A Lifeline To The Abortionists