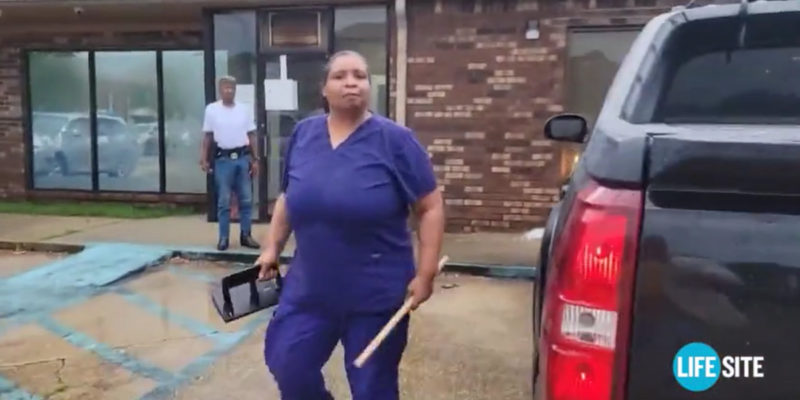 Last Friday, the pro-abortion crowd suffered a terrible setback in a New Orleans courtroom when state district judge Ethel Simms Julien, who inherited a case from a Shreveport abortion clinic which had succeeded in venue-shopping enough to earn a temporary restraining order from Julien’s colleague Robin Giarrusso stopping the state’s abortion ban, ruled that proper venue for the case should be in East Baton Rouge Parish.

Julien also didn’t grant an extension of Giarrusso’s temporary restraining order, which meant that the abortion ban went into force. There was some interesting maneuvering surrounding that; she couldn’t extend the TRO, because she had already transferred venue. The 12 female lawyers in the courtroom for the Shreveport abortion clinic were very upset by that, but there was nothing they could do.

Except to demand a temporary restraining order from the new judge in East Baton Rouge Parish, which yesterday they managed to get.

The trigger laws are blocked until a hearing set for July 18 at 8:30 a.m. at the 19th Judicial District Court with Judge Don Johnson.

The fight against Louisiana’s aggressive abortion laws moved from New Orleans to Baton Rouge on July 8, which set the ban on abortions back in effect over the weekend.

When Roe v. Wade was overturned by the Supreme Court, a Louisiana law went into effect banning abortions, even in cases of rape or incest.

A lawsuit filed by the Center for Reproductive Rights within days of the ruling argued that the language in Louisiana’s trigger law was too vague, and a state judge granted a temporary restraining order halting the ban until after a hearing.

The Center for Reproductive Rights issued the following statement Tuesday:

This is an incredible relief for people who need abortion care right now in Louisiana. Abortion care in the state can resume today, and further irreparable harm has been avoided. Our work continues and we now look ahead to our hearing on Monday, where we will ask the judge to block the bans more permanently. Every hour and every day that a clinic can still provide abortion care fundamentally changes the lives of people for the better.

“People who need abortion care right now in Louisiana” is a hell of a turn of phrase, isn’t it? This from the same political movement which has zero problem trashing care pregnancy centers which serve the same exact group of people but come about it from the standpoint that they’d prefer not to kill human beings while providing “care.”

What happened yesterday wasn’t a particular surprise, of course, as Johnson is another partisan Democrat just like Giarrusso, and his TRO is garbage as an expression of legal analysis just like Giarrusso’s was. There is supposed to be a predisposition in law toward the constitutionality of state statutes, but the atrocious judiciary in this state at the trial court level doesn’t seem to respect that – it didn’t when Louisiana’s House of Representatives used its statutory power to dissolve John Bel Edwards’ tyrannical COVID emergency lockdowns, and it doesn’t in the case of the abortion ban which is fairly obviously constitutional in light of the U.S. Supreme Court’s Dobbs ruling.

As we’ve said, this is simply the death rattle of the abortion industry in Louisiana. It won’t last long. But it’ll certainly irritate, because what we know about the Left is they don’t respect public opinion or law, or objective reality. They want what they want and they’ll whine until they get it. Just ask Susan Hutson.

And when what they want is to kill children who are inconvenient, you get an ugly look. Both in court and on the front steps of a trashed care pregnancy center. And when a pro-life activist was physically attacked for delivering a written statement by Louisiana Attorney General Jeff Landry about the validity of the state’s abortion ban law.

This is a lot of fun…

A stick AND a three-hole punch.

That’s who Don Johnson is giving a lifeline to while innocent children are being chopped up and their body parts sold.

We wonder whether that unhinged, vulgar woman will be charged with assault, or if the East Baton Rouge District Attorney’s office will even bother to process the case (the odds are they’ll ignore it completely, but if the pro-life activist had defended himself he’d surely be prosecuted).

Louisiana’s abortion ban will be found constitutional. These people will be shut down. But the fight will never be over. Everyone should understand that.