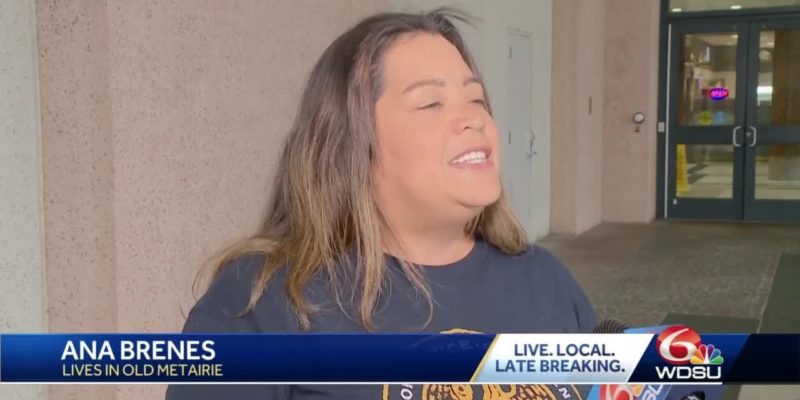 This was always going to be a problem once the city of New Orleans stopped having a functional local government. And that happened several years ago. Once a municipal government abdicates stewardship of its economy by engaging in predatory tax and regulatory policy, while at the same time abandoning its obligation to provide for the public safety and ignoring its infrastructure, the rot is sure to spread.

And it has spread across the New Orleans metropolitan area. Because the criminals of New Orleans, who are in full control of the city thanks to a Soros-backed District Attorney who refuses to prosecute crime, a leftist sheriff running a revolving door of a parish prison, judges who are bought off by gangs and otherwise operate on a pro-criminal agenda and a demoralized, understaffed and wholly ineffective police department courtesy of the city’s drunken, unserious and incapable mayor, are running out of easy targets in the city.

That’s how you get this…

A man stole a car with a baby inside and then deserted the child on the side of a New Orleans road, authorities say.

According to the St. Bernard Parish Sheriff’s Office, 21-year-old Jonathan Perkins stole a car around 11 a.m. Wednesday that was sitting outside of a Chalmette business.

Perkins took off with the baby inside, but deputies found the child unharmed on the side of the road on an Almonaster Boulevard overpass in New Orleans. Deputies later found the car abandoned but still running near Desire Street.

Perkins was arrested Thursday afternoon and booked for theft of a motor vehicle, second-degree kidnapping, child desertion and illegal possession of stolen property.

And it’s how you get this…

The Old Metairie carjacking case raised an awful lot of hackles in Jefferson Parish. Old Metairie is supposed to be the safest part of the metro area, at least on the south side of Lake Pontchartrain.

But it isn’t. Not any more. The Jefferson Parish Sheriff’s Office is still very much a functional police force, as the Parish Councilwoman Jennifer Van Vranken, who’s exploring a run for Lt. Governor next year, says, but this is not a police action.

And of course there is the fact that I-10 inside the city of New Orleans is a shooting gallery now.

Inside the city, things are so bad that people realize they can serve the cause of justice better by taking video of crimes and releasing it to social media rather than calling 911. Of course, LaToya Cantrell and Shaun Ferguson might not like that. But it’s the truth. NOPD didn’t catch B.J. Brown, you know. He was in Tennessee when he was caught. And attempting to kill that cop in the Volunteer State will earn him a whole lot more jail time than he was ever getting in New Orleans.

The animals control the streets in New Orleans. They control the interstates now as well. There is no functional police force patrolling I-10 inside the city, and highway shootings happen every 10 days, with highway murders happening every 60 days.

The NOPD doesn’t even really investigate robberies or burglaries. They barely investigate carjackings. Muggings are a fact of life. So is domestic violence in the poorer areas of the city.

It’s reverting to a state of nature. And that’s a state in which commerce and industry cannot thrive. Nor can tourism, which the defective political class in New Orleans stupidly thought it could base New Orleans’ 21st century economy on.

New Orleans is dead. The stench of the corpse is wafting into the neighboring parishes. Jefferson has long fought the war against Orleans’ criminals but is now losing the upper hand. And St. Bernard is almost defenseless as the next-door neighbor to New Orleans East, which is a lawless shooting gallery straight out of a hyperviolent video game.

The time for the National Guard and State Police to enter the scene and begin locking down what can be saved of New Orleans is long past. Now the mismanagement of the State Police by Louisiana’s Democrat governor has brought the federal government down on its head, and soon to come is a consent decree which will force it to embrace the same hug-a-thug mentality that destroyed the NOPD.

Which means there is no saving New Orleans. And there might not be any saving Jefferson or St. Bernard.

Not unless the politicians there recognize the magnitude of the war they’re in and the steps – which will not make them popular with their defective colleagues in Orleans – that must be taken to contain the contagion until responsible leadership at the state level can be had.

What’s most amazing to us about the utter disintegration of New Orleans is that the citizens of that city have not created militias to keep the peace. We expected to see those spring up months ago. Maybe attempts were made and those were discouraged, or maybe they’re just overdue.

But the current trajectory can’t sustain.