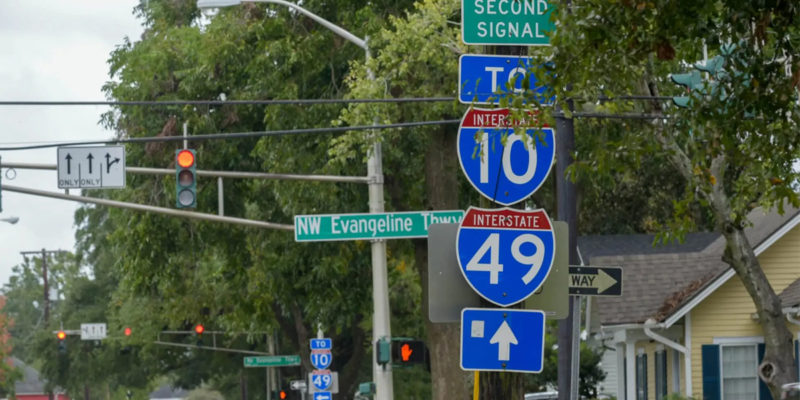 Woke roads may not be coming to Louisiana, but the attitude behind these might slow down progress to complete the state’s portion of Interstate 49 to link with the rest of the country.

The concept of wokeness – that America from its history, culture, society, and economic system is so irredeemably racist that only replacement at the systemic level led by government (which itself needs a makeover for this reason) can cure it – made its practical appearance in transportation policy when the Democrat Pres. Joe Biden Administration announced over $1 billion in taxpayer dollars to fund pilot projects that remove allegedly oppressive after-effects of highways going through area with majority-minority populations. This could include more portals and connecting access across areas where highways run, beautification, and repurposing of rail lines.

But most controversially, removal of those highways qualifies for the pot. That has been the goal in some urban areas, including New Orleans where Interstate 10 swoops south to skirt the north edge of the Vieux Carré before curving back to meet the straight-shot I-610, in the process following a stretch of Claiborne Avenue that seven decades ago was much more vibrant and a mecca for commerce in the city’s black community. Activists have argued for destruction of the elevated roadway and restoration of Claiborne.

Fortunately, as woke as the current crop of New Orleans elected officials may be, that’s not something on their radar. Beset with a myriad of problems (many exacerbated by their policies), they just don’t have the time or dollars to expend on such an extensive and disruptive remaking. Plus, to follow that agenda would exhaust, and likely leave begging for more, the pilot money just made available on this one project.

So, while wasting taxpayer resources on this item of no real importance or benefits to the state fortunately seems highly unlikely, the ethos represented could cause problems elsewhere – principally with I-49, which federal and state planners imagine its southern terminus commences in New Orleans on the West Bank and proceeds through Louisiana into the heart of the Midwest where it can connect with Interstate 29 all the way to Canada.

Down south, almost all of that has been completed into Lafourche Parish, and everything has been done out of state to the north. Absent the U.S. Highway 90 stretch from Lafourche to the West Bank and two small stretches around Morgan City and New Iberia, that leaves just two urban connectors, in Lafayette and Shreveport, to finish.

In those two heavily-urbanized areas wokeness on this issue has reared its head, although not so much in Lafayette. With area governance in the hands of Republicans, there has been little hesitation to promoting the relatively-constricted Acadian Thruway to elevated status, potentially disrupting lower-income neighborhoods even more. Yet even the usual suspects who might oppose that on ideological and esthetic grounds have conceded, from their viewpoint, that this may serve as the best of what they see as bad options.

More fortified resistance has come in Shreveport, where special interests have kept up a campaign to divert the road from its current terminus at Interstate 20 through the Allendale neighborhood just west of downtown then along a sparsely-populated route to connect with the current terminus of the northern half at Interstate 220. They would prefer looping around, but also pitch the idea of an elevated roadway a grander version of the Acadian Thruway more like Claiborne Avenue of the past for local traffic where the connector would run.

Area political leaders, majority Democrats, wisely haven’t seen it that way, understanding the benefits of having an expressway skirt the western edge of downtown (as I-20 currently does to the south) and that the Allendale neighborhood continues in decline. Census tracts 207 and 252, the urbanized areas in the proposed route, have seen population fall by around 20 percent since 2010, the total number of housing units drop by about the same, and these continue as low-income minority areas. As well, the alternative solutions are significantly more expensive than the selected elevated route.

The only one not on board has been Democrat state Rep. Cedric Glover, who on multiple occasions by legislation or budget riders tried to move funds away from completing the connector and to expansion of or to a new Jimmie Davis Bridge connecting southern Shreveport and Bossier City. However, last year Republican state Sen. Barrow Peacock aced him out of that selling point by getting assured state money for dealing with the bridge (the current idea being a new four-lane version).

Opponents now lean heavily on the racism bunkum provided by the Biden Administration as a means of stopping the connector project as currently envisioned by its not turning on the federal spigot to finish the job as presently envisioned, but the demographics and economics aren’t on their side. The next step forward should come in a couple of months with completion of the environmental impact review.

Regrettably, the woke attitude at present in Washington will allow local special interests a chance to slow down the Shreveport connector, staving off the inevitable to the benefit of nobody, but wiser heads will prevail even if it takes longer.