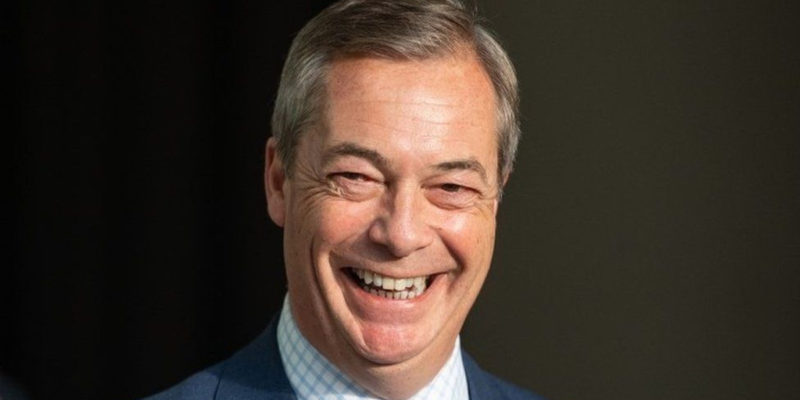 No individual has had a greater impact on post-Thatcher British politics than Nigel Farage.

The former European Parliament member and leader of the UK Independence Party successfully campaigned for the United Kingdom’s departure from the EU in an historic national plebiscite that asserted Britain’s political and economic independence from Brussels and by extension forced two changes at 10 Downing Street.

And the effects of the bottom-up movement against the transnational elites had a ripple effect felt “across the pond” as the 2016 Brexit vote has been widely viewed as a harbinger of Donald Trump’s election to the presidency four months later.

One of the leading voices against the rise of globalism, Farage has made numerous post-Brexit visits to America to extol the virtues of preserving the nation-state and the absolute necessity of defending the tenets of western civilization.

In the first of this three part interview Farage fields questions about “woke culture”, the unpersoning of Harry Potter author J.K. Rowling, Prince Harry’s unkind words about the First Amendment and the overturning of Roe v Wade, and the Marxist war on history and western civilization.

MB: Woke Culture has become a major source of societal friction in both the United States and the United Kingdom.  In Britain, prominent figures who are hardly considered conservative voices such as Harry Potter author J.K. Rowling and Monty Python troupe member John Cleese have found themselves in the social media crosshairs of the “woke-ists”.  Do you find it ironic that these entertainment figures would be targeted by the progressives?

NF: Oh completely.  John Cleese, I remember a few years ago, was doing a national political broadcast on behalf of the Liberal Democrats.  So he’s very much a figure of the political center but of course as a satirist and amongst the geniuses behind Monty Python, he’s earned his living mildly insulting people of all kinds, and now he learns that some people can be insulted and other people can’t be insulted, and that there are whole groups that now we aren’t even allowed to discuss or talk about.  And I think for someone like John Cleese it’s been revelationary.

On J.K. Rowling, the only word I can use is disgusting.  There was a big reunion the other day…25 years of J.K. Rowling…all the film stars who have made millions out of her books and the films that followed at this huge event and none of them, none of them, saw the truth of the situation that she wasn’t invited.

It’s just beyond belief.  I think in her case, it’s woken up millions of people that something really bad is happening.  These are modern-day witchcraft trials.  You say a word out of place and…I was going to say “blacklisted” but I’m not certain I can even say that now.  That’s where we are with all of this.  So I think on this gender stuff in particular, I think the pendulum is starting to come back.  Lia Thomas being a famous example, the swimmer.  There is a much broader conversation going on.  I believe that all throughout social history the pendulum swings back and forth and I think this will change.

What I don’t think will change in a hurry is how we got to this.  We have completely turned our backs on the Dr. Martin Luther King idea, the “I Have a Dream” speech where one day he wants his children being judged by the content of their character and not the color of their skin, and now we are all being put in little groups…we’re black, Hispanic, white, gay, straight, non-binary…and this identity politics is driving us apart and not bringing us together.  It’s very dangerous and it’s actually quite deep-seated and the education system is reinforcing it in the most astonishing way.  It’s a very big battle.

MB:  In America we had an issue with the removal of statues.  It started with Confederate generals and then it moved on to stripping the names of our Founding Fathers, American World War II generals, and even Union generals from buildings and monuments.  In Britain there was a great deal of controversy over the delayed placement of a statue of Margaret Thatcher in her home town of Grantham, which was shortly thereafter vandalized by a university employee who brazenly hurled eggs at it.  Are we now at a point where we are no longer allowed to have conservative heroes?

NF:  Yes, there was a famous song “No More Heroes” by the English rock band The Stranglers.  This is Marxism pure and simple.  The attempt to destroy history.  An attempt to make us hate who we are.  Hate where we came from.  And it’s exactly the same playbook used by Lenin in the run up to the 1917 Russian Revolution.  Make people hate the Tsar.  Make people hate Russia as it was.  So “The Brave New World” can follow in its place.  It’s ridiculous. How can we judge the standards of yesterday by the moral rule book we have today.

We just had the Platinum Jubilee in England.  Seventy years of the queen.  Without doubt…without any doubt…the most popular human being in the world.  She is adored.  I’ve been the West Indies and the taxi drivers say while we may have our independence but she (Elizabeth II) is still my queen.  It’s just extraordinary the extent in which in the Commonwealth and in America that this woman is loved.

And very interesting, I went up to the Midlands on the last day of the Platinum Jubilee celebrations with my GB News hat on, meeting young people who were out partying and a fair percentage of them when I talked about the Royal Family and the queen talked about colonialism, and oppression, white privilege, and it said so much to me.  It’s all part of the same picture.

What we’re really saying is that the entirety of western civilization, of everything that has been built, developed, evolved over centuries, defended at great cost of blood and treasure.  That all of this is under attack and under assault.  And it’s that serious.  And my conclusion with it all is that America, and in many ways it’s America’s fault because this nonsense started here…it always does…everything good and bad starts in America apparently…it’s just the way it works!

But if the battle for our values is lost in America, it’s lost across the entirety of the western world and we will hasten a new world dominated completely by China.  That is how serious this is.

MB:  You’re not the only Brit to come over to the States to share his views of America.  Last year Prince Harry in an interview last year described the First Amendment of the Bill of Rights as “bonkers” and then last month at the United Nations the Duke of Sussex called the recent US Supreme Court decision overturning the 1973 Roe v Wade decision as a “rolling back of constitutional rights here in the United States,” lumping it with the Russian invasion of Ukraine as part of “global assault on democracy and freedom.”  Your thoughts?

NF:  He’s a moron.  Isn’t it funny?  Anything they don’t agree with they think is anti-democratic.

Roe v Wade actually, whatever one’s views on the issue itself, and when it comes to abortion the Atlantic is quite wide while on other things it’s quite narrow, but the recent Roe v Wade reconsideration is actually incredibly democratic because it puts power back into the hands of the states and therefore because Americans have the right of ballot measures in states it puts it directly back in the hands of elected representatives and the people so (Prince Harry) is a complete idiot to say and suggest that.

I did notice …number one why the hell was he there anyway?  What qualifies this bloke to be at the UN?  Though I was very pleased to see that the hall was virtually empty when he spoke.  But yeah, he and that ghastly wife of his (the former Meghan Markle, Duchess of Sussex) are so representative of this new form of “liberalism”, which interestingly has quite a lot in common with certain unpleasant regimes that sprung up in the 1930s, they actually believe themselves to be superior human begins to anybody else that is conservative.

You know the “Liberals” are now the most illiberal group of people.  I had Ken Livingstone on GB News the other day, the former mayor of London…proper, old, post-1945 hard Left, high tax socialist and you know what, we had a very civil debate.  We agreed to disagree.  We shook hands afterwards and said we look forward to seeing each other next time.  That is how democracy ought to be conducted.

I’m old enough to remember, huge arguments, family arguments, arguments in my village pub…old boys arguing like crazy, but nothing like what we are seeing today.  Good example, there was a show in Britain with these two blokes, one was left wing and the other right wing and someone asked if they hated each other and one of them replied that they fought together in World War II and that this was what they fought for, the right to agree to disagree but not to disrespect the other human being because they have different points of view.

And that is what liberal democracy and the correct use of the word liberal means.  And again, all of this is directly under assault.

Interested in more national news? We've got you covered! See More National News
Previous Article CROUERE: Ignore The Media Spin – The Economy Is Dreadful
Next Article SADOW: Louisiana’s Dems Have To Pick A Candidate For Governor In 2023