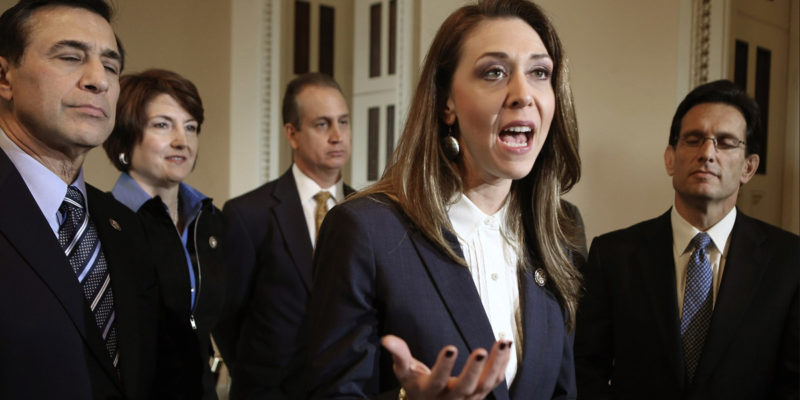 Of the 10 Republicans who voted to impeach President Trump, two of those Republicans came from the state of Washington. The only two Republicans that represent the ultra-liberal state. Rep. Jaime Herrera Beutler and Dan Newhouse could be understood considering the territory. Beutler’s district was redrawn and includes more Democrats now. In truth, that’s a seat that Republicans are probably lucky to have. To put this into context, her district sits between Portland, OR and Seattle, WA.. For Republicans, it’s a seat they would love to keep, but it may prove to be one of the few bright spots for Democrats in November. Last night, with Republican challengers poised to send her home, Beutler managed to win second in her primary falling second to Democrat challenger Marie Perez. Washington has a jungle primary where the top two candidates go into a runoff even if one candidate exceeds 50%. In Washington’s house races, Beutler was the only incumbent not to win first.

So why should people down south be concerned about Representative Beutler? It isn’t because of her vote to impeach Trump, but rather her willingness to spend money. In this NPR article, Rep Beuler states that she supported an Anoxic Selector. She is quoted as saying

Granted, it was an NPR article so perhaps they twisted her words. Maybe NPR picked that line out instead of a more intelligent line. Maybe. But unless she contests that, we have to assume that those words came out of her mouth. We have here a Republican who votes to spend money not based on relevancy, but whether it sounds important. This is the kind of Republican we can do without. What is she doing up there in D.C.? If she’s just browsing bills and saying, “oh, that sounds important, let’s spend money there”, what’s she doing with the rest of her time? We don’t need to be sending people to Washington who are more interested in attending the glamorous parties of D.C. night after night and not being a good steward of public funds.

Imagine going to Senator Cassidy or Senator Kennedy and telling them you need funding for an Anoxic Selector. Cassidy and Kennedy would… ok. Let’s get real, Kennedy is a poster child for enquiring minds want to know. If you’re a tax moocher, Kennedy is Satan’s spawn. If you’re a taxpayer, he’s an angel sent down here by God himself. Kennedy would ask questions about what an Anoxic Convertor is. Cassidy would probably travel the state bragging about how he spent your tax dollars assuming that you don’t really care about how your tax dollars are really spent.

Imagine going to Kennedy with a proposal to spend 1 million on an Uber Dexatron Converter. It sounds important, it must be important. Only problem is, that was just made up. Kennedy would have wanted to know what it is. Rep Beutler would have just voted for it because it sounds important. And Senator Cassidy? Well, he might know that it isn’t anything, but it sounds good and would go around the state promoting it.

This is a much bigger problem in Washington. We’re not sending our brightest minds to the nation’s capital. We’re sending the best actors, not the best people. Besides Senator John Kennedy, how many people in our nation’s legislative body ask tough questions? How many people are asking questions about how much money we’re spending on Ukraine’s war? Is that an investment to win? Or are we just going to have war in perpetuity so that we can blame our economic problems on Putin forever? What’s the end game in Ukraine? Do you want your tax dollars to go to support a new endless war? While I’ll gladly stand with Ukraine in a war in which they were invaded, it isn’t wise to help a country be mired in a war for several years turned decades. Why isn’t the US brokering peace talks to end that war rather than funneling billions into a corrupt Ukrainian government to perpetuate it?

Many people believe that our politicians have a plan to make the general public broke. That you will own nothing and be happy. Or, as it is in communist nations, you aren’t allowed to own anything and are forced to declare your happiness. I’d prefer to believe that our politicians are not intelligent enough to come up with such a sinister plan and implement it. People like Rep. Beutler are simply not that intelligent.

But the masterminds of the Left do have a plan and they think it’s going to go a certain way, and they are trying to break us and force us into submission. The problem is, they can’t figure out why things aren’t going the way they planned. For example, Transportation Secretary Buttigieg in his giddiness that gas prices are sky high, expected people to go out and buy an electric vehicle. The wannabe car salesman simply doesn’t understand why people aren’t lining up to buy EVs.

Pendejoe no doubt buys into the “Never let a crisis go to waste” mantra and purposely creates crisis after crisis so that he can ride in like a knight in shining armor on his white horse to save the day. except, he doesn’t know how to solve the problem. He’s got a plan, crash the economy, blame everybody else, claim “capitalism failed” and then be the hero and become the greatest President ever. Except, he doesn’t know what to do next. Just blame people.

There are three reasons that explain how these people get into office. 1.- we’re stupid and they take advantage of our stupidity. 2.- they are so confident in their stupidity that we get suckered in by their arrogance. 3, We’re simply don’t prioritize our freedom and our nation enough to get out and meet this people face to face and ask them questions and measure their intelligence. I’m going to go with option 3. We’re not valuing our freedom nearly enough.

Whether we’re talking about Pendejoe and his Alfred E. Neuman look-a-like Transportation Secretary, Senator Cassidy or the Representative from the state of Washington, the real problem starts with us on the local level. It isn’t just our duty to our fellow countrymen or our children to be well informed, but an obligation to ourselves. If you want to be free, if you want to enjoy your freedom, do you not have a moral obligation to yourself to make sure the people you are voting for aren’t going to throw it away? And we can complain that they are already in office and we can’t change it, but where do you think they got their start?

It starts at the school board level, the city council, and the mayor’s races. Those seats that you look at and think they have so little value serves as the steppingstone for many politicians. Cassidy, for example, got his start as a State Senator. We have many people who are more than capable of giving us great representation. And yet, we treasure our freedom so much so, that we’ll make our judgements off of a 30 second ad.

If we’re going to be warriors for liberty from the couch, we’ve already lost the battle.