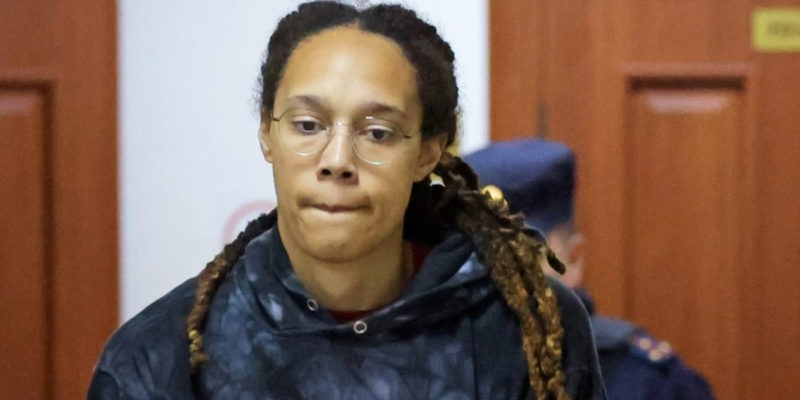 American WNBA star Brittney Griner was convicted in a Russian court Thursday of smuggling drugs with criminal intent, amid concerns she is being used as a political pawn in Russia’s war against Ukraine.

Griner faces up to 10 years in jail for the charge, and prosecutors asked for 9.5 years in closing arguments.

Prior to the verdict, Griner apologized to the court and asked for leniency in an emotional speech.

“I never meant to hurt anybody, I never meant to put in jeopardy the Russian population, I never meant to break any laws here,” Griner said in the Khimki city courthouse. “I made an honest mistake and I hope that in your ruling that it doesn’t end my life here. I know everybody keeps talking about political pawn and politics, but I hope that that is far from this courtroom.

“I want to say again that I had no intent on breaking any Russian laws. I had no intent. I did not conspire or plan to commit this crime,” she added.

The verdict comes about six months after the 31-year-old was arrested at a Moscow airport and accused by Russian prosecutors of trying to smuggle less than 1 gram of cannabis oil in her luggage. The two-time US Olympic basketball gold medalist pleaded guilty to drug charges last month in what her lawyers say was an attempt to take responsibility and receive a lenient sentence.

They sentenced her to nine years. And yeah, it’s a bogus rap. They caught her bringing in CBD oil cartridges, and pretty much railroaded her.

But here’s the thing – Brittney Griner has been a woke anti-American activist who played all the National Anthem games and called this a racist country. Then she went to Russia to play pro basketball in the offseason and acted like she was above their laws and wouldn’t be affected by world events by going there.

Almost literally put her head in the lion’s mouth.

Why play pro ball in Russia during the WNBA offseason? Oh, because the Russians pay well and the WNBA doesn’t.

And because it appears you can’t make a pile of money on endorsements in America by being one more woke a-hole sports figure. It appears Megan Rapinoe broke that revenue mold by trashing Subway’s bottom line.

She was railroaded, but she’s in this trouble because of her own choices. Don’t put yourself in position to be victimized by a hostile foreign government and then have the weaklings and crooks at the U.S. State Department waste what little credibility and stroke they have while we’re blowing billions of dollars we don’t have to prop up a proxy war against that hostile foreign government, and you’ll be happier. And you won’t have to beg Joe Biden for help, as though that has ever been a viable thing to ask for.

What comes next is the corporate media demands to the Biden administration that they do everything they can to bring Brittney Griner home.

This actually would have been easier to do if Biden had been attempting to broker a peace between Russia and Ukraine rather than depleting our arsenal of surface-to-air missiles to send to the Ukrainians. Biden is in no position to help Griner.

And we have bigger problems than trying to spring woke a-hole sports figures who’ve already been very clear what they think of their fellow Americans.

Interested in more national news? We've got you covered! See More National News
Previous Article BLANCO: Stupid Is As Stupid Does, In Congress And In The Voting Booth
Next Article MARSH MAN MASSON: This Change Turned Fish On!