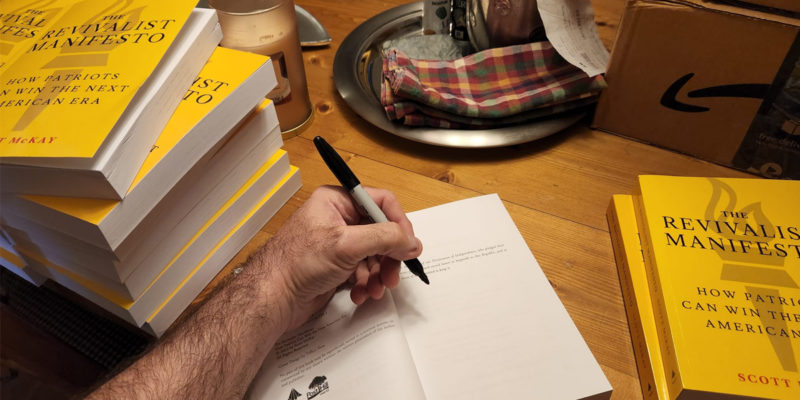 Sales of the book continue to be pretty solid two months after the release of The Revivalist Manifesto, and it seems there are quite a few readers who had it on their summer reading list and have finished. Here’s a sampling of the recent five-star reviews…

Oh, so you’ll know, all of the reviews so far have been five-star reviews. Just thought we’d pass that along.

5.0 out of 5 stars Solid political read

The Revivalist Manifesto does an excellent job explaining how and why America is in such dire straits in 2022. This book also provides plenty of historical backing to better explain how America is entering a new political era–the 4th major era in American political history. Definitely recommend this book for conservatives looking to go on offense and retake America!
One person found this helpful
Helpful

Conceptor
5.0 out of 5 stars The times, they are a-changin’

Verified Purchase
If you’re sick of seeing the American Republic sacrificed on the altar of DC/Wall Street kleptocratic globalism, and if you’re sick of being betrayed by the whiney fakery of such corporate shills as Kevin McCarthy and “Turtle” McConnell, Scott McKay has some sweet music for your ears.
Brace yourself. Roll up your sleeves. Gird up your loins. Revive the Republic.
One person found this helpful
Helpful

Amazon Customer
5.0 out of 5 stars It’s a very important book.

The Revivalist Manifesto is, despite the conservative orientation of its author in his writings for various publications, actually a relatively non-partisan book – in that McKay savages both the Left and the Right for the errors and foul deeds they’ve committed over the past half-century. Honest Americans would struggle to disagree with either takedown.

What’s most interesting is the characterization of where we’re going. This book might go against the grain a bit in predicting a wave election in 2022, but what McKay is saying is a new political era is coming – and that means successive elections, not just one. And that will either be true, or maybe elections won’t really matter much anymore.

The guess here? He’s right. But he’s also right that the leadership of the Republican Party is not good enough to kick off this next era. We’re seeing that this summer. And it may be that this book is a little ahead of its time – because we’ll need a lot more Liz Cheney rejections before the GOP establishment in Washington can be replaced with something better.

One person found this helpful
Edit
Delete
Caleb Reese
5.0 out of 5 stars A National Must-Read

Verified Purchase
This book is truly a playbook for modern America. What we are seeing across this country is a lack of patriotism, a lack of confidence in our country. This book is a well needed revitalization of the American dream that is so desperately needed. Once you start, you can’t stop and it truly opens your eyes to what is going on in modern American politics. Read this book. Talk about this book. Put this book into action. Kudos to Scott for this amazing read!
One person found this helpful
Helpful

Reviewed in the United States on August 8, 2022

Scott McKay is one of the most articulate, straight-shooting Conservative authors out there!

Between the yellow covers; you’ll discover that it’s not only informative, but educational , inspiring and motivational!

So we thought that was nice.

The Revivalist Manifesto is $18 at Amazon in paperback, and it’s just $7.99 as a Kindle e-book.

It’s interesting, because in the two months since its release the basic premises of the book have all held up exceptionally well. There’s a media narrative out there that the red wave most people seem to think is coming isn’t really a thing, but the book doesn’t rest on that assumption – instead, it talks about an entire new political era which is about to begin, and that encompasses a lot more than just one election cycle.

Right now it looks like the biggest barrier to the red wave is a public distaste for the GOP leadership in Washington, which is decidedly not revivalist. Mitch McConnell is actively suppressing an America First Republican agenda, for example, and he’s the least popular politician in DC. Maybe it’ll take a couple of election cycles for the MAGA/revivalist movement to fully sweep the old Bush Republican gang out of power, but when that happens (it would be great if it happened in January, but it will absolutely happen sooner rather than later), you will have all of the elements for everything the book talks about to be realized.

And most of the future will get covered in the next book, which will be The Revivalist Agenda. I’m trying to get that finished by the end of the year. What’s in TRM is really a lot of history and perspective on where we are as a country and why the stage is set for something new.

But when you read it you’ll understand all that in technicolor. So grab it and have a look, and don’t forget to drop us a review on Amazon when you’re done!