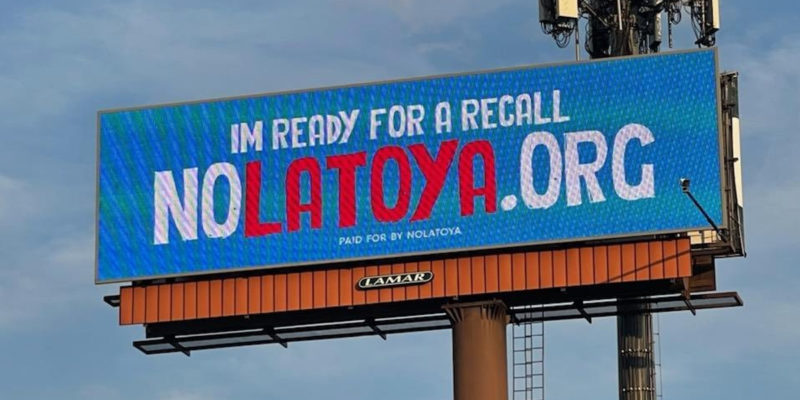 It has finally happened, the long slumbering, apathetic voters of New Orleans have been awakened. All it took was for a mayor to ignore the major problems in the city, spend her time gallivanting around Europe on the taxpayer’s dime, refuse to refund taxpayers for illegally flying internationally first class, claim that she needed the luxurious accommodations because of the so-called threats to African American women sitting in couch and, finally, visit a local courtroom to give aid and comfort to a criminal, while ignoring outraged victims.

LaToya Cantrell has always been a poor fit for the position of Mayor. She is not from New Orleans and knows little about the traditions of the city.

She should have never been elected Mayor since she was caught using city council credit cards for personal expenses.

After being elected for her first term, she was exposed for mishandling her personal taxes. In addition, when disaster struck New Orleans and the Hard Rock Hotel collapsed, Cantrell was totally inept in her management of the demolition. It was delayed for an unacceptable length of time and the dead bodies of victims were allowed to remain in the destroyed building for months.

Even more disturbing was her horrific handling of the pandemic. She did her best to destroy the city’s economy by locking down New Orleans and enforcing some of the most draconian vaccine mandates in the country. With such disasters, Cantrell should have been easily defeated in her re-election campaign.

Incredibly, she was elected with an astounding 65% of the vote against a slew of unknown opponents. One of the reasons for her victory was that only 28% of the registered voters bothered to cast a ballot.

Just a few months after her resounding re-election, Cantrell is facing a recall campaign. Voters are now finally realizing the disaster in City Hall known as “LaToya the Destroya.” In fact, some voters are even longing for the “good old days” of convicted criminal Ray Nagin in City Hall.

The sad truth is that New Orleans has not had a genuinely good mayor since the administration of Victor Schiro in the 1960’s. It has been a one-party city for over one hundred and fifty years, since the last Republican Mayor was elected during Reconstruction in the early 1870’s.

Of all the city’s mayors in the 300+ years since the founding of New Orleans, LaToya Cantrell may be the worst of them all.

Her number one priority as Mayor should be to provide public safety to the beleaguered citizens of New Orleans. On this measure, she has failed miserably. The number of murders in New Orleans increased in 2020 and 2021 but have skyrocketed in 2022.

Sadly, New Orleans is on track to reclaim the title of Murder Capital of the nation. The murder rate in 2022 will soon surpass the total from 2021 and there are more than three months left in the year.

Our police force has been decimated and is currently at least six hundred officers short of decent staffing. In fact, the entire criminal justice system in New Orleans is a disaster with liberal judges, a socialist Criminal Sheriff and a George Soros funded progressive serving as District Attorney.

Despite these major problems, it does not help to have the mayor spend her time and energy supporting criminals in court while ignoring victims. Strictly on the issue of public safety, Cantrell should be recalled.

While there has never been a successful recall of a New Orleans Mayor this effort may have a chance. While the Mayor claims this effort is a Republican Party attempt to sabotage her, the organizers of the recall are both African American Democrats.

After the petition was filed with the Secretary of State’s office, the recall campaign immediately recruited over 3,000 signed petitions. It helps that the organizers are savvy on social media.

The effort is now receiving funding for promotional items, such as yard signs, which are being printed. Most impressively, recall Cantrell billboards have started to appear in New Orleans.

Petition signing events are becoming recall parties and are being organized throughout New Orleans. These events are well planned with volunteers signing up citizens, distributing yard signs and collecting donations.

The leaders of the recall claim that the numbers of signed petitions are increasing so rapidly that they may reach their goal of 54,000 signatures one month early. State law allows six months for a recall campaign.

Despite the difficult hurdles ahead, recall organizers are enthusiastic and energetic. Their excitement is well founded for the recall is happening at a particularly momentous time in the history of New Orleans.

Why did everyone leave? One of the major reasons has been poor leadership. If Cantrell is recalled, it will be the best thing to happen to New Orleans in decades. It will show that the long-oppressed voters finally care enough about their city to act.

It is time to retire the old slogan, “The City that Care Forgot.”

It is about time that the people of New Orleans cared about their city and demanded public safety, a healthy business environment, usable infrastructure, and competent public services.

Everyone in Louisiana should be pulling for New Orleans to recall Cantrell. It is the crown jewel of the state and if it finally starts moving in the right direction, the entire state will benefit.