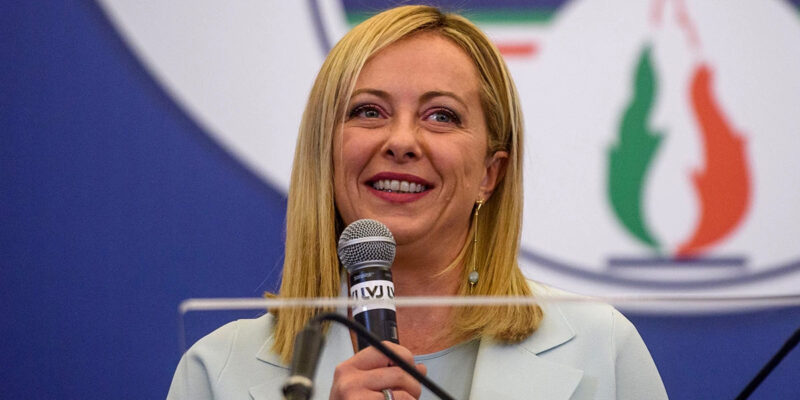 Italy is set to have a new Prime Minister, Giorgia Meloni, and she is a conservative firebrand if ever there were one.  Enjoy a taste of one of her typical speeches:

Yes to natural families, no to the LGBT lobby, yes to sexual identity, no to gender ideology, yes to the culture of life, no to the abyss of death, no to the violence of Islam, yes to safer borders, no to mass immigration, yes to work for our people…

Why are conservatives/revivalists in the States lacking leaders like her and Hungary’s Viktor Orban?  Why are we afflicted with vacuities like Rep. McCarthy and betrayers like Sen. Cassidy who will only offer stale, vague, focus-grouped slogans every election cycle, and then do little to implement them when actually in power?

The GOP’s ‘Commitment to America’ document is a perfect example of this.  Daniel Horowitz gives it its proper condemnation:

There is no recognition whatsoever that this is the Fourth Reich, the economic collapse is not by accident, and that we have suffered through the greatest tyranny and civilization destruction of all time. That is to say, the biggest omission from this document is COVID fascism. It’s as if the past two and a half years never occurred. There was no throwaway line even nodding toward banning all mandates, much less reviewing the genocide of gain-of-function research, dangerous vaccines, ending the PREP Act and immunity for pharma, and making sure this can never happen again. There was no recognition that the inflation is a result of the policies from COVID, which the GOP collaborated with. There is also no acknowledgement that the energy crisis is not just about inflation, but about building on the COVID lockdowns and social control to impose an equivalent scenario with energy and food.

The problem seems to have something to do with an oversized focus on the individual here in the U.S.  Individual freedom has become such an obsession that we have forgotten about our corresponding duties to the communities we are a part of.

For the strong individual to exist, the corresponding institutions and communities and traditions that put restraints on the individual’s will must become weak – family, Church, trade guild or union, neighborhood, respect for past generations, concern for those generations not yet born, etc.  The exception is government.  It must grow very mighty indeed to help free the individual from the authority of ancient customs and institutions.  Bruce Frohnen explains a little of how this has unfolded in the U.S.:

Unfortunately, the Bill of Rights has failed—or rather been made to fail—in its primary purpose. Those claiming to free the individual pretended that these rights are something absolute which the federal government must protect at all costs, and that any laws (even the Constitution itself) standing in the way of those unattainable absolutes are by nature illegitimate. In this way they delegitimized our frame of government, our fundamental institutions, and law itself. Those who claimed to be freeing the individual in effect left him alone, with no defenses, to face the mob.

The absolutized pursuit of happiness by individuals, for whom community is simply a voluntary association (at best), is leading to ever more horrific results:  loneliness, depression, widespread addiction to pornography, gender transitions/mutilations, rampages through retail stores, murder.

Our purported conservative leaders, then, have been hemmed in by their fears of two powerful forces that they are afraid to challenge:  the rootless individuals who parade about, whose passions they dare not bridle for fear of reprisal (i.e., loss of votes), and the managerial/technocratic Elite who take advantage of the individuals’ weaknesses to gain and enhance their own power and wealth.

This paralysis of theirs, naturally, isn’t helping to advance any real conservative goals.  To do that, they must regain a proper regard for the balance that needs to be maintained between the community and the individual; they must be willing to challenge the Elite hold on power and to give some tough love to the materialistic, hedonistic drifters looking out only for themselves.

Meloni, Orban, Duda in Poland, and others are showing the way.  Conservatives in the States should watch and learn.

As they learn from them, though, there are things they can do in the short term to get us started down that path – things like giving married families with multiple children greater voting strength in elections; returning the election of U.S. senators to the State legislatures; allowing counties and parishes to have the same sort of equal representation and selection of senators in the State senates.

Referencing the populist, conservative victories in Sweden and Italy, Ron Paul said, ‘ . . . there is still a strong feeling of popular revolt against political elites in the air.’  Will conservatives in the States be able to ride that wave of sentiment this fall and thereafter to some significant victories and reforms?  Not with the current collection of deadweights who are only too willing to continue the destructive one-sided policies that favor self-interested individualism while downplaying affection for and duty toward community and tradition.