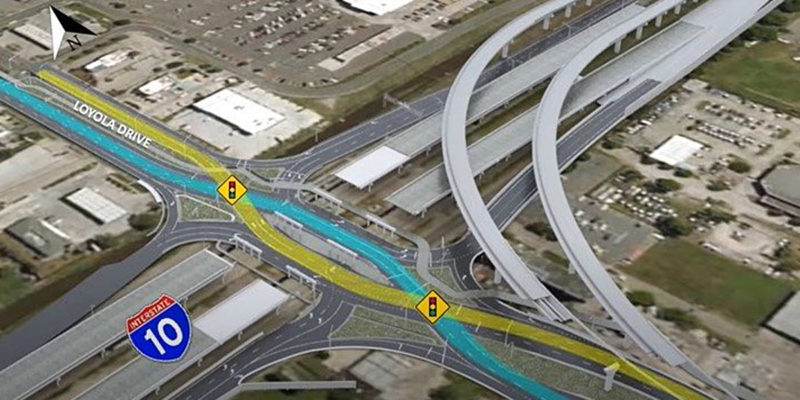 When I first saw this, my reaction was that it was a bit like an S&M thing, only with traffic. I’m not sure how else to describe this rather macabre redesign of the Loyola Drive exit on I-10 in Kenner which would accommodate the new flyover ramps the state is constructing to facilitate traffic in and out of New Orleans’ new airport.

To say that the new airport terminal is a miserable failure of government planning and coordination is to be too generous, as our readers know. The airport opened in 2019 before there had been any real movement toward servicing it with roadways, and so for three years people heading to the airport from New Orleans have had to pass through two or even three red lights to get there from I-10 on Loyola Drive.

They didn’t bother to build an access road to connect it. They just used a little road that was the last exit on I-10 before you left Jefferson Parish and ended up in the swamp of St. Charles Parish, and extended it into the airport.

This would have been an utter catastrophe, and initially it was. We were absolutely positive that the voters in Jefferson Parish were going to exact brutal revenge on Gov. John Bel Edwards for the fact he’d been the governor for four years while the airport terminal was being constructed and barely lifted a finger to build a suitable road to it. But Eddie Rispone never even bothered to bring up the issue and weaponize it against Edwards, and Rispone got slaughtered 57-43 in Jefferson despite having a great issue to run on. Rispone is a construction magnate, for crying out loud; it should have been a no-brainer for him to skewer Edwards on his stupid and useless infrastructure failure at the airport.

Edwards managed to skate on that question, and just after the election he dodged a bullet because the college football national championship happened to be at the Superdome – but LSU was one of the two teams in it, so traffic in and out of the airport was half what it would otherwise be.

Then COVID hit and New Orleans’ tourism business has never been the same since.

But there are still traffic jams on I-10 near that airport all the time. They just haven’t risen to the level of mass-extinction political events. Maybe if the Greater New Orleans economy wasn’t so stagnant they would have been.

But now the state Department of Transportation and Development is touting its grand redesign for the Loyola exit near the airport, and, well…

“The flyovers will be open by early 2023, weather permitting” means that it’ll be a miracle if they’re open by the end of next year.

And when they are, you’ll be able to get to the airport more easily from I-10, but Loyola Drive is going to be a traffic hellscape no one will want to drive on. Anybody with a business along that road will soon want to close it and move due to the confusion that “diverging diamond” will create.

We’d laugh about this. On a certain level it’s hilarious. Except this does damage to Louisiana.

And we haven’t even gotten to what DOTD wants to do to I-10 in Baton Rouge, which might just kill the city.

Interested in more news from Louisiana? We've got you covered! See More Louisiana News
Previous Article SADOW: Does Louisiana Need A Gas Tax Hike? Not Really…
Next Article Pay Back NOLA For Outrageous Travel Costs? With What?