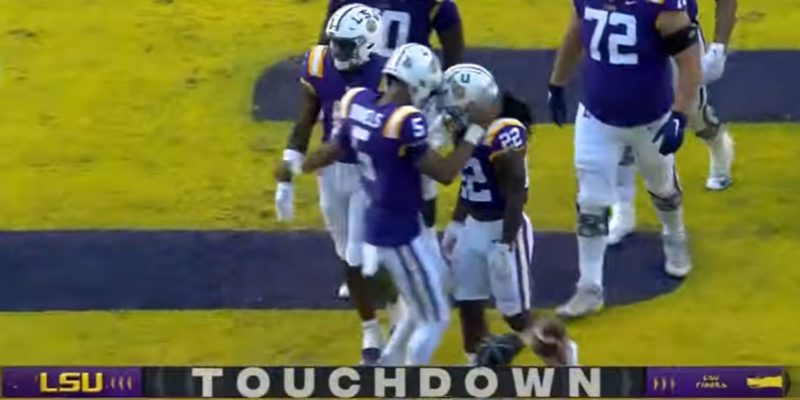 It wasn’t designed to be a competitive game and it wasn’t, though the opponent did hang tough as long as they could. LSU only led New Mexico 10-0 until late in the second quarter.

But we took lots of positives from this one, and we’re pretty satisfied with where Brian Kelly’s Tigers are heading into the meat of SEC play.

Yes, New Mexico is inept offensively. They’re the worst offensive team LSU will see all year. Southern without question had more offensive talent than the Lobos did. So we’ll get that out of the way. Regardless of the opponent, Matt House’s defense…

New Mexico had only one chunk play all game long, a 38-yard pass on a wheel route against a busted coverage (wheel routes out of the backfield are famous for causing those). Other than that one play? UNM quarterback Miles Kendrick was 4 for 6 for 9 yards and was sacked four times.

They had one 10 yard run, and that came on a long-yardage down and the runner was stopped short of the first down.

New Mexico had 10 possessions in the game. One was one play at the end of the first half, one was a six-play drive for 19 yards, one was a five-play drive that included the chunk play on the wheel route…and the other seven were three-and-outs.

And here’s why this is impressive.

LSU was missing four defensive starters in the game.

Defensive tackle Masson Smith has been out for the year since the first series of the Florida State game, so that’s one. Safety Major Burns has a neck injury which will put him out 3-6 weeks. Defensive end B.J. Ojulari and safety Jay Ward, the reigning SEC Defensive Lineman and Defensive Player of the Week, respectively, for their performances against Mississippi State, were both sidelined with minor injuries and expected back for the Auburn game next week.

In addition, cornerback Colby Richardson was listed as a starter in the game but missed a good bit of it.

Which meant LSU was missing three starters in the secondary for most of the game. Kelly moved cornerback Jarrick Bernard-Converse to safety, started backup nickel Sage Ryan and had Ohio State transfer Seven Banks, who hadn’t played all year, at Bernard-Converse’s corner spot opposite Mekhi Garner. And there was only one busted coverage all night.

That’s a defense which is communicating and knows what they’re doing. LSU has the look of a unit which can hang with anybody – they’ve got athletes who can run and hit, they’re stout at the line of scrimmage and awfully tough to run on, they’re pretty scary rushing the passer and you simply don’t get a lot of open receivers against them.

It’s going to be a lot of fun seeing what they’ll look like when (1) they’ve got everybody but Smith healthy and (2) they start playing top-flight offenses. Though certainly Mississippi State is no slouch and LSU did a terrific job against State.

Burns is a loss, but against Auburn LSU finally gets Arkansas transfer Joe Foucha eligible after his four-game NCAA suspension for some sort of snafu with his transfer. That should be something like a one-for-one trade, as Foucha is an SEC veteran playmaker.

We love this defense. It struggled for most of the Florida State game (it turns out Florida State might be decent this year, by the way), but since then it’s been nails.

This one won’t jump right out at you, and it isn’t a perfect analogy, but bear with us here because there is something noteworthy in it.

And yes, the smart-aleck among you will say that Walker Howard, LSU’s true freshman third-string quarterback and Jamie’s son, is a better analog for Jamie. But no, that’s not what we’re doing here.

Jamie Howard’s freshman year at LSU was 1992, and he was playing on a terrible team that went 2-9 but yet Howard managed to do enough on that team to make folks think he had a future. He showed off some tools and at times he gave LSU’s offense some gas. Going into his sophomore year Howard was seen as a potential star, but instead that year was a disaster, and he wasn’t a whole lot better as a junior.

But Curley Hallman, the incompetent coach Howard had played under from 1992-94, was fired after that season, and Gerry DiNardo was hired to replace him. DiNardo wasn’t exactly what you’d call an innovator of offensive football, but he brought with him a competent offensive coordinator and quite good quarterback coach in Morris Watts. And under Watt’s tutelage Howard improved quite a bit before he was put out for the year with a shoulder injury in the sixth game of the season.

To compare the two, consider Daniels as a Howard at scale. He was on a bit better team than Howard as a freshman – Daniels led Arizona State to the Sun Bowl in 2019 – and he had a lot better season. Daniels had 17 touchdown passes to only two interceptions that year.

But like Howard, and here’s the meat of the comparison, Daniels’ development completely stagnated in his sophomore and junior seasons prior to a major change. By last year people at Arizona State had gone from talking him up as a potential first-round draft pick to wondering if he shouldn’t be replaced, and that sparkling 17-2 TD-interception ratio had shrunk down to 10-10.

And like LSU’s terrible coaching staff Howard labored under for his first three years, Arizona State’s staff is being turned out. Head coach Herman Edwards didn’t last three games into this season. Meanwhile, Daniels has competent coaching under LSU quarterbacks coach Joe Sloan, who’s made some productive passers out of quarterbacks of far less talent than Daniels, and he’s flourishing. So far Daniels is completing 73 percent of his passes, and he’s thrown six touchdowns without suffering an interception.

For a long time people used to muse about what would have happened had Howard not hurt his shoulder against Florida. He was improving week-to-week and there were at least a couple of games in the back half of that 1995 season LSU might have won had he been healthy.

Well, Daniels is improving week-to-week. Against New Mexico it was clear the plan was for him to hang in the pocket and go through his progressions, and there was notable development on that score. He was 24 of 29 in the game and for the first time Daniels was putting the ball through some somewhat-tight windows and hitting receivers in intermediate routes.

He’s a reclamation project of sorts like Howard was. But it’s on a much larger scale. Kelly is a lot better coach with a lot more advanced offense than DiNardo, and LSU is a far better program. Even Ed Orgeron was a lot better than Hallman was.

The point is, Daniels might be a monster before this is over. Marrying a decent pocket passing game with his mobility could really make him a nightmare to prepare for, and that’s just what Kelly and Sloan seem to be building.

Halfway through the third quarter Daniels took off running and converted a third down, but got up a little gingerly after being slammed to the turf. Backup QB Garrett Nussmaier was due to come in for mopup duty anyway, and he did.

Unlike his first appearance of the season against Southern, though, in which Nussmaier was erratic as hell and threw two interceptions, one which went for a touchdown the other way, this time the redshirt freshman was poised and efficient. He ended up completing 9 of 10 passes for 135 yards and a touchdown, looking exactly like the star in waiting we’ve heard he was.

Nussmaier has a live arm and a quick release, and he’s happy to throw downfield in a way Daniels doesn’t seem quite as comfortable with. He’s still not a better choice than Daniels, for the simple reason that Nussmaier is a lot worse risk of a turnover than Daniels is and he isn’t the running threat Daniels can give LSU, but for right now he’s settling in as a good backup and the quarterback of the future (at least, until the Walker Howard Era begins).

All of a sudden quarterback looks like a strength. That’s encouraging.

Special Teams Isn’t Quite Better, But…

One major development in the New Mexico game was that LSU has found a punt returner. It got called back on an especially cheesy “blindside block” penalty that Kelly threw a fit over (and rightfully so), but Jack Bech brought a punt back for a touchdown. He’s the third guy LSU has tried at a position which has been a real adventure so far, and it’s clear he’s the right guy for the job. Bech has velcro hands, he can take a hit without going down, he’s got good vision as a runner and he has enough speed to break a play.

Of course, he had two good returns called back on penalties, not just one. So there’s still a lot to clean up.

Kickoffs were again horribly inconsistent, and that probably means Damien Ramos has lost that job to Northwestern transfer Trey Finiston, who replaced Ramos after another kickoff out of bounds. Ramos also missed a 38-yard field goal, though it was maybe a foot to the right and thus perhaps excusable. When the kickoffs aren’t line drives, LSU seems to be able to cover them – but they’re line drives more than they aren’t.

Jay Bramlett didn’t have to punt at all in the game, which is the best news of all in the kicking game last night.