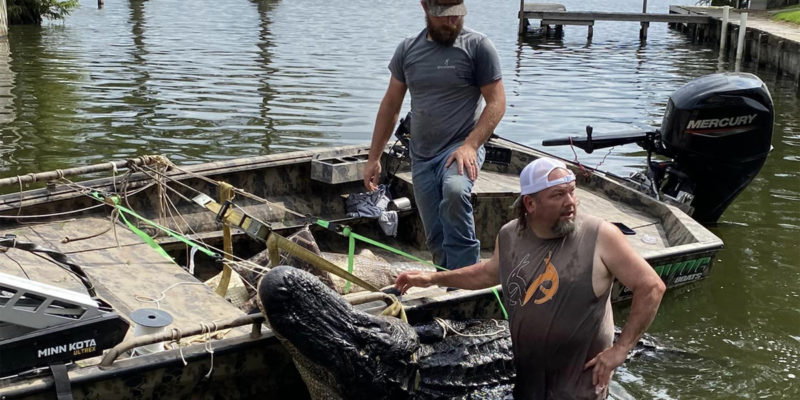 A couple of things bring alligators to mind on a Friday. One’s fairly dramatic, the other isn’t – but might be more important in the long run.

As our regular readers – and casual ones who are veterans of “Swamp People” and other such shows – are doubtless aware, September is the month in Louisiana when the state Department of Wildlife and Fisheries allots tags for hunters to harvest alligators from the swamps, bayous, lakes and ponds. The harvest is usually quite plentiful, as alligators are ubiquitous here and can not-uncommonly be dangerous pest animals.

So on Lake St. John, which is in Concordia Parish along the Mississippi River essentially halfway between Baton Rouge and Monroe, a couple of gator hunters were plying their trade and came up with one of the biggest monster alligators we’ve ever seen.

The guy shooting the video’s name is Nathan Gautier, and he services boats out of Natchez. One of the hunters is a guy named Jerry Sepulvado out of the Monroe area.

That monster is 11 feet eight inches and he weighed in at more than 800 pounds.

Which is one awfully big gator.

A 12-footer isn’t all that uncommon. Certainly it’s big, but occasionally you’ll run across bigger. But this guy was FAT. They had a hell of a time getting him into the boat he was so heavy, and never actually managed it.

People who hunt alligators will tell you getting them in the boat is the hardest part. Despite what you might see on Swamp People, killing the gator is really pretty easy. You bait a line, usually with rotten chicken or fish or something, and you hang it from something, and then you wait. The gator will come along and wolf down your bait along with the hook it conceals, and then he’ll submerge. Pull up the line slow and easy, and he’ll just float passively to the surface, and then you take out your rifle and shoot him in his head at the base of the skull. One well-placed point-blank range shot and that’s generally it.

But even a small gator is going to weigh well more than a large man. Lifting that into a small boat is a very strenuous and wholly unpleasant task.

I bring all this up because one of the big highlights of this season for hunting alligators is this weekend’s annual gator hunt extravaganza that Attorney General Jeff Landry puts on as a fundraiser. Landry’s gathering has turned into a three-day event, with big parties Thursday night and Friday night, and then an all-day festival on Saturday. The guests who show up at the gator hunt are usually pretty high-end; most of Louisiana’s Republican politicos will make their way to Landry’s camp outside of the little town of Catahoula, in St. Martin Parish, and there are usually some out-of-state bigwigs who’ll come in as well – Donald Trump, Jr. and Kimberly Guilfoyle have already come in for the hunt.

As of this morning, Landry’s hunt has already reeled in three gators of more than 12 feet. And they’re just getting started. And of course the real purpose of the hunt is that it’s a big political fundraiser. Landry routinely hauls in more than a million dollars each year at the gator hunt; it’s starting to become one of the biggest events in Louisiana, and even southern, politics.

We remember the first year he put on the gator hunt. Landry was in congress at the time, and there was a pinko Democrat congressman from New York named Gary Ackerman, known for wearing a carnation boutonniere on his lapel, who took a pot-shot at Landry for putting on the event, because somehow it’s cruel to the monstrous apex predators of the swamp that they might be hunted before they overpopulate and become a deadly threat to pets and people.

So we put forth, as a rather pointed joke, a modest proposal that Landry’s next fundraiser might be a hunt for effeminate politicos with obsolete sartorial choices instead.

And for our trouble, defending one congressman against another by the use of humor, the FBI was sent to your author’s doorstep for inquiries as to the intentions of that blog post.

Eleven years later the FBI is going lots of places. But Gary Ackerman is, thankfully, long gone from Congress.

It’s funny how these things can tie together.