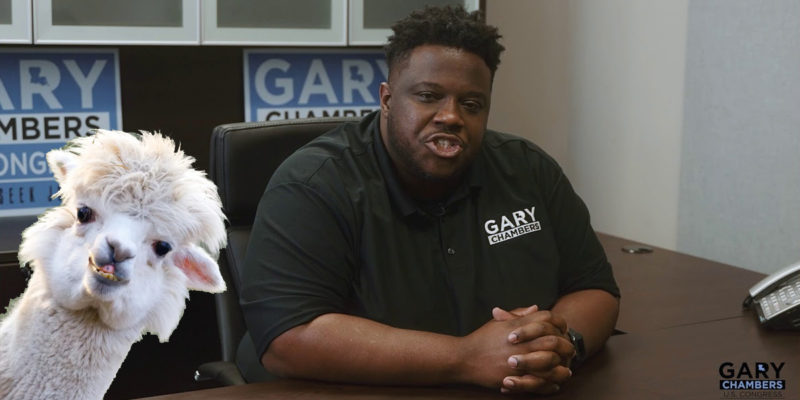 It’s pretty obvious that the grand designs of Louisiana’s most famous race-hustler are petering out, and in a way it’s disappointing. Not that we’re going to spend too much time summoning up sympathy for Gary Chambers.

It seemed for a while that Chambers was following the Stacey Abrams playbook for successful political grifting and working his way toward a nice payoff. You make loud noises in favor of Hard Left positions which arouse the attention and feelings of white Marxists on the east and west coasts, rake in the commensurate dollars to go with them, spend judiciously and try not to waste or steal too much of the money as you run for a seat everyone knows you can’t win.

The coastal Marxist crowd likes a good quixotic tilt at windmills. They’ll pay for that.

What they won’t pay for, though, is idiotic high-on-the-hog living, like going through five grand in AirBnb fees on a fundraising trip to California. That kind of thing gets out once it hits the campaign finance report, and the trustafarians and institutional Leftists who fund campaigns like Chambers’ will eventually recognize he’s a bad investment.

And that’s what’s happened to him.

The latest campaign finance report shows Chambers only had $20,000 left at the end of September, and he hadn’t even booked any air time. So now we know he won’t.

What’s more, the video production folks who did those web ads he tracked in so much attention for? They’re gone. Not on the payroll anymore.

So while John Kennedy just dropped this ad onto the airwaves…

…and Luke “The Alpaca” Mixon has this one…

…there is no joy in Garyville.

Or maybe there is in the actual Garyville, but not in the figurative one.

Mixon’s camp was all giddy about that Public Policy Polling survey which had him beating Chambers 16-9, with Kennedy at 53 percent. It turns out that was a poll the Mixon campaign paid for, and it was certainly designed to pump up his numbers – his name was read first, then Syrita Steib (who polled at six percent), then Kennedy’s and THEN Chambers’, and the “push” question in the poll was asking voters how mad they were that Kennedy voted against the infrastructure boondoggle bill (they weren’t) – something that essentially sought to amplify Mixon’s message from his TV ads.

So you could take all of that with a grain of salt and question whether Mixon was really ahead of Chambers. But based on the fact that Chambers has spent all of his money on, essentially, wine, women and song rather than TV or even street money, the PPP poll might actually be right that Mixon has managed to climb over Chambers.

That’s something which really shouldn’t have happened. And if Mixon ends up with more black vote than Chambers does, it’ll really be the end for him.

We’d be disappointed to see that, because we certainly wanted Chambers to make a run at controlling the Louisiana Democrat Party when this is over. But if he’s run through all of his cash and he’s now dead in the water three weeks out from the election, nobody’s going to give him control of a damned thing.

And the effect is that white Democrats, who have done more to ruin Louisiana than anyone else, will get to rule a party they’re a minority in for just a little longer. That’s something we were hoping to see come to an end.