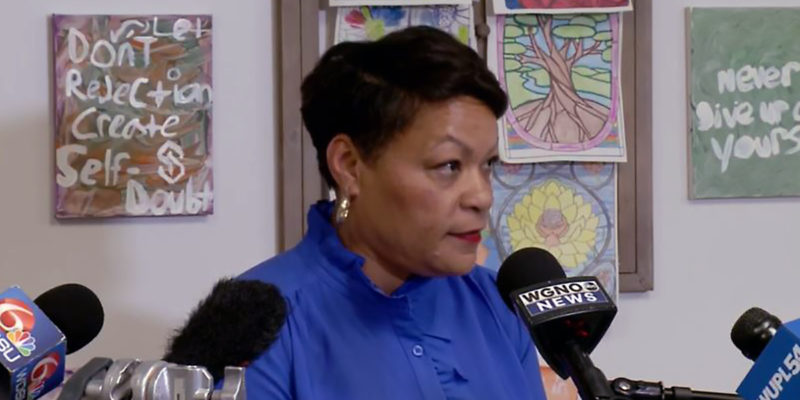 …we were actually a bit surprised that this raised an outrage late last week when Fox 8 TV in New Orleans ran one of their Lee Zurik investigation stories on it.

The City of New Orleans owns an apartment in the Upper Pontalba building along Jackson Square. It’s been used for several decades as a hospitality suite and a place where the city will put up visiting dignitaries and so forth. But the current scandal, on top of several other scandals, is that LaToya Cantrell, the corrupt idiot who currently serves as the mayor of that failing city, has moved into that apartment and is living in it rent-free.

We heard about this a couple of months ago from folks we know who are Cantrell’s neighbors. We were given to understand that pretty much everybody in New Orleans knew about it. It’s not a secret that Cantrell’s marriage has gone bust and that she’s carousing with another man at present; she’s seen painting the town continuously with the guy.

Our understanding was that this was common knowledge in New Orleans. We would have broken the story otherwise.

So the real question is, is this a big deal?

Well, the fair market rental rate for the 1.800-square foot apartment is just under $3,000 per month, so if she’s been there for four months that’s just under $12,000 worth of use of city property for personal ends. And yes, it’s illegal under the state constitution for a public official to make personal use of state property (and the city of New Orleans is a division of the state government of Louisiana) without recompense.

Cantrell’s defense is that her use of the apartment isn’t any different than that of previous mayors. Which is a lie; Fox 8 smoked that out by talking to former officials under Marc Morial, Ray Nagin and Mitch Landrieu who all said those mayors never lived at the Pontalba while in office. She also said through a spokesman that there’s no set rule on the use of the apartment.

Except that doesn’t matter. Under the state constitution she can’t live there without paying rent on the place.

This is of a piece with everything else there is about LaToya Cantrell, who is – though there is certainly stiff competition – the worst mayor in America.

The fun part about this debacle, of course, is that the NOLAToya recall crew are now camping out at the Pontalba with their recall petitions, so that when Cantrell comes and goes she’ll get to see them. The chances aren’t horrible that they might goad her into some golden video which fuels the effort – since Cantrell’s sociopathic narcissism and combative nature is a very bad fit for the kind of accountability the recall would impose.

But if you think Cantrell is going to make good on that rent, think again. As we noted about the $30,000 she rang up in business class airfare upgrades while traipsing around the globe to “promote New Orleans’ brand,” she doesn’t have the money. This is somebody who knows how to waste and destroy wealth, not create it, as her record makes clear.

Interested in more news from Louisiana? We've got you covered! See More Louisiana News
Previous Article SADOW: You Own The Arena, Bossier, But It’s $12 To Park There
Next Article SADOW: Most Of The Constitutional Amendments On The Nov. 8 Ballot Stink