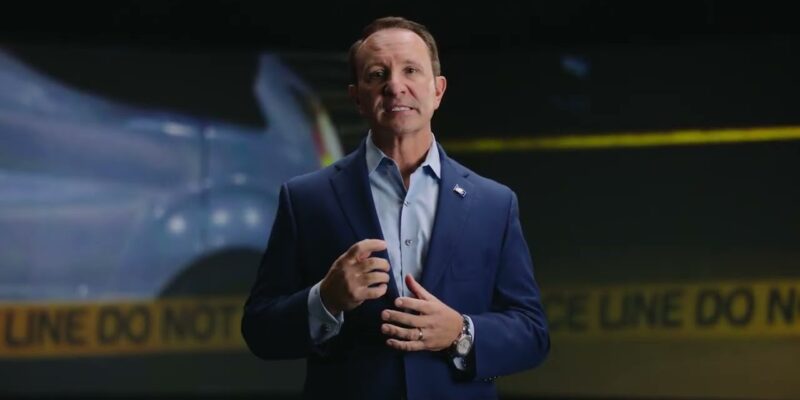 He fell a few months short of the coyness record, but the favorite for assuming Louisiana’s governorship in 2024 finally made it official, refreshing the contest’s dynamics.

Republican Atty. Gen Jeff Landry yesterday joined fellow GOP members Lt. Gov. Billy Nungesser and Treas. John Schroder in the field in what already has turned as the highest-profile clash of statewide elected officials in the state’s history: never have three of the five currently elected top officers of the state contested for the state’s top job. Ever since winning reelection in 2019, widespread speculation had Landry running, who did nothing to discourage that, and with one of his chief deputies declaring months ago for his job, his entrance was inevitable. However, he didn’t come close to Republican former Gov. Bobby Jindal’s marathon of waiting until a mere three months prior to the election, months after Democrat former Gov. Kathleen Blanco announced she wouldn’t run for reelection, to make it official.

No matter, as in the case of Jindal grass hasn’t grown under Landry’s feet either in the interim. As of the first of the year, he had raised more money than either of the other two, both directly and indirectly and likely has distanced himself further since.

Moreover, compared to the other two Landry has had much greater opportunity to place himself in the public consciousness by virtue of his position. Here and there an issue has come up by which Nungesser and Schroder could leverage to publicize their credentials for higher office, but Landry has capitalized on an avalanche of these. Here, Louisiana’s bad political fortune has intersected with Landry’s good electoral fortune of having Democrat John Bel Edwards in office during his entire tenure, piled on by Democrat President Joe Biden assuming office in 2021. Both have engaged in policy-making, often overstepping their bounds, inimical to Landry’s solid conservatism – and that has given him plenty of opportunities as the state’s chief legal officer to dispute Edwards and/or Biden judicially, quite often leading to victory.

Landry’s activity has paid off in polling, although sparse and stale, that shows him comfortably topping the other two. It also has earned him some enmity, certainly among activist Democrats who see him as a nightmare both entirely willing and able to shrink government and not just block but reverse advances in their social and cultural agenda, but among some Republicans as well who see him as grandstanding with the most uncompromisingly conservative agenda.

No recent issue has separated the three than a recent dustup over whether to allow the quasi-state agency the New Orleans Sewerage and Water Board to start the borrowing process for adding power generation, over the city’s insistence that it would ignore abortion restrictions, at the State Bond Commission. Nungesser and Schroder joined Landry in voting to deny authorization at the outset of the controversy, but eventually peeled off, isolating Landry, to send it through.

This exemplifies the retreat of both Nungesser and Schroder from a populism that Landry has embraced throughout his elected career, which began in Congress a decade ago. Nungesser commenced his political career as supposedly speaking for the little guy washed out by water by the hurricane disasters of 2005 then Gustav in 2008, then by oil with the Macondo disaster in 2010 as Plaquemines Parish president. He carried this ethos through his first run for lieutenant governor in 2011. Schroder made waves in a short-lived coalition in the state House of Representatives called the “fiscal hawks” claiming to want to rein in government size but was much more flash than substance and not particularly conservative in nature.

Yet now Schroder seems to be positioning himself as a managerial class, less-excitable version of Landry that would appeal to the party’s more staid commercial interests, while Nungesser has gone to emphasizing his cooperation with Edwards and that he will work with anybody to provide government service that appears to appeal to non-Republicans not interested in reducing and reorienting government. Landry, however, never has strayed from the populist, or even revivalist, part of his conservatism that predates its national rise through GOP former Pres. Donald Trump and his appeals against how big government can interfere inappropriately with people’s lives resonate well with the electorate not out to use government as a redistributive tool or as an enforcer of their orthodoxy.

Building on that has given him the advantage, for it squares with the populist strand in Louisiana’s political culture. In a sense, the battle among these three will mirror intra-party factional competition among Democrats, where their version of traditional vs. new powerbrokers divides between the liberal, largely white, populists against a new breed of woke, mainly black with white cultural elites tossed in, leftist extremists.

And, it only can become better for Landry’s prospects. Unless a completely unanticipated quality candidate from the right emerges, the only others likely to give it a go would be to the center and left, which will do little to erode Landry’s base but affect everybody else’s chances negatively. Now, almost all the main players have gathered, and let the sport begin.

Interested in more national news? We've got you covered! See More National News
Previous Article Was The 2023 LAGOV Race Just Won On Tucker Carlson Last Night?
Next Article Landry And Schroder Are Teaming Up Against BlackRock