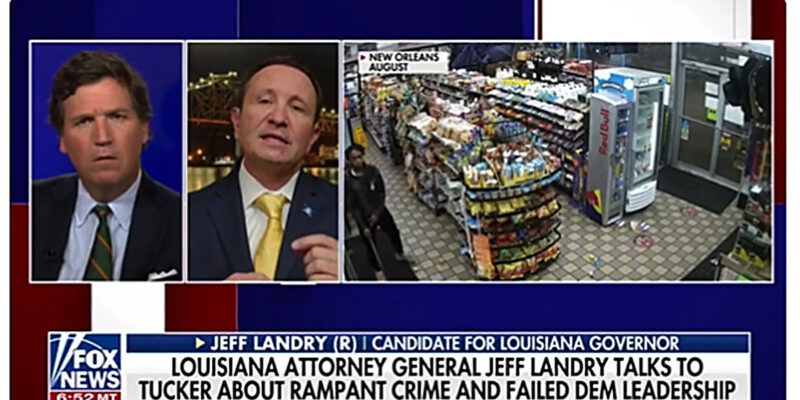 We have a couple of clips from last night’s Tucker Carlson show on Fox News to bring you, and while each is noteworthy in their own right, combined they illustrate something we’ve been talking about for a while which is now wide open as a key theme for the 2023 gubernatorial race that Jeff Landry officially entered yesterday.

Here’s the first clip, and it’s Carlson dinging New Orleans for its abysmal, through-the-roof murder rate and the city’s moronic mayor face-planting into the sand over the fact it’s now the murder capital of the world on her watch…

Tucker Carlson blasts the mayor of New Orleans for downplaying how the city has the highest per-capita murder rate in the US. pic.twitter.com/fJRufovZlZ

Things are so bad that a few days ago a 73-year-old man was shot and killed while driving on I-10 – which is bizarre, except it isn’t. That terrifying incident was the SEVENTH such horror to happen in the Big Easy this year – and the 25th person shot overall. It’s something which shouldn’t happen more than once in a generation and now it happens almost once a month.

There have been 220 murders in New Orleans so far this year and that doesn’t count the more than 400 people who’ve been shot and survived. Nor the countless others who survived stabbings, stranglings, beatings and other attempted murders the denizens of that city have indulged in.

Now here’s the second clip. Carlson then had Landry on, and after some of the obligatory declarations now that he’s running for governor he began talking about solutions…

This has always been the answer, you know. And not just for New Orleans. All three of Louisiana’s largest cities are shooting galleries where law enforcement has all but surrendered and most of the murders are never even cleared with an arrest. And the current governor is worse than absent in handling this problem.

Louisiana doesn’t have a functional police force in its major urban areas, other than perhaps the East Baton Rouge Sheriff’s Department. The city police in New Orleans, Baton Rouge and Shreveport are severely undermanned, deliberately underfunded and thoroughly demoralized by terrible leadership and zero political support from the leftist Democrat incompetents who misgovern from the mayor’s offices.

And two things are true.

First, this can’t be fixed at the local level. The electorates in all three cities are not capable of choosing better leadership than what’s currently in office. New Orleans already overwhelmingly re-elected LaToya Cantrell when it was blatantly obvious what she was. The same is true of Sharon Weston Broome in Baton Rouge. Adrian Perkins in Shreveport is a first-term mayor and could very well be voted out of office, but he’s the latest in a long string of destructive dunce Democrats that city has installed in that job, and if he’s beaten it will likely be either Greg Tarver or LeVette Fuller who wins the race. Neither of them will govern any differently.

So the local voters in those cities have proven they won’t choose a law-and-order mayor who’ll clean up the streets. This is part and parcel of what I’ve called Weaponized Governmental Failure; Hayride readers know all about it. The gist is that over the years they’ve chased off enough middle class voters by failing to fight crime, provide decent schools, fix potholes, manage traffic and do all the other basic things required to adequately govern a city, and with those voters having decamped for the suburbs they now have electorates which are so heavily concentrated with Democrat Party clients as to make elections into farces in those cities.

Only a LaToya Cantrell, Sharon Weston Broome or Adrian Perkins can be elected in Weaponized Governmental Failure cities. They’ve misgoverned their way into a built-in left-wing majority that can’t be broken. And even without a tax base there’s plenty of money for the pols to misappropriate and steal; it rains down from the federal government with things like Section 8 housing and economic development block grants and so forth.

But second, this isn’t an acceptable situation. Because in response to Weaponized Governmental Failure the productive classes don’t have potable, or non-poisonous, options.

Let’s say you’re the governor of Louisiana and you’re a legitimate conservative and you’re faced with a dying city run by a LaToya Cantrell.

You can just pull everything out of New Orleans, for example, and let it die off if it won’t change its ways. In fact, that’s the only way over the long term that you can scrub out Weaponized Governmental Failure. It’s a solution that, in slightly different form, goes all the way back to how the Munster Rebellion was broken. That means killing all the federal grant money, refusing state spending on the city other than the bare minimum, and so on. If you could do that, it would force Cantrell and the local politicians to have to compete with the suburban parishes for a tax base and self-generate the city’s budget.

The problem is, that isn’t realistic. Politically it won’t work. The media will eat you alive and the suburban state legislators, almost all of whom are Republicans, will get weak-kneed and freak out, and you’ll ultimately decide the juice isn’t worth the squeeze where this plan is concerned. Not to mention that you’ll end up getting blamed for the sorry state of these places. You might ultimately impose so much pain on the electorate and political class that you get a sea change and things hit rock bottom and begin to resurface, but the damage it’ll do to you might be fatal.

What you also can’t do is to go on pretending everything is fine, and to encourage the suburban parishes to maintain a submissive and subservient posture to a New Orleans while its political class is destroying the city and, in turn, the metro area around it. Doing that essentially gives left-wing wreckers like Cantrell political power over the more populous and far more productive suburbs, and everyone gets hurt. That’s the status quo now, and it results in crime metastasizing into the suburbs along with the economic malaise the vortex of a dying city will drag those suburbs into.

People particularly in parishes like Bossier, Jefferson, St. Tammany, Ascension and Livingston are really beginning to get that. Increasingly you hear from them that they don’t want to even travel into “the city” because it’s so unsafe and run-down and depressing, and increasingly they don’t.

You can’t have the murder capital of Planet Earth as the principal city in your state. You have to fix that.

And it leaves you, as the governor charged with handling this problem, with just one other option. Which is the one Landry is now openly embracing. And that’s to run on taking the bull by the horns and essentially invading the dead blue cities and going to war with their corrupt, failed political classes.

Essentially this is about the suburbs opening hostilities against the cities. And that is long overdue.

How does this play out? Well, you saw a little taste of it with Landry’s two-month campaign to hold up State Bond Commission funding for a Sewerage & Water Board project until the politicians in New Orleans would buckle under and end their declared defiance of the state’s new abortion ban. It didn’t hold, because too many Republican members of the commission tucked tail and ran away from the fight, but for a brief shining moment you could see an attempt to bring the city to heel. Landry is just the Attorney General, and he doesn’t have enough stroke yet to make such a move stick. But make him governor and that Bond Commission starts becoming a real weapon. And the dead blue cities run by Weaponized Governmental Failure practitioners start finding the financing for their infrastructure needs drying up unless they govern a lot more responsibly.

Another example is from next door in Mississippi, where the dead blue city of Jackson so destroyed its water system that not only wasn’t the tap water potable, it didn’t even come out of the tap anymore. Jackson’s mayor Chokwe Antar Lumumba, a neocommunist and black separatist who used to openly discuss turning the states of Louisiana, Mississippi, Alabama and Georgia into an independent black nation, so botched that system that its plight became a national crisis.

Nobody thought Mississippi’s Republican governor Tate Reeves had it in him, but Reeves jumped in and declared the state of Mississippi would intervene and resuscitate the Jackson water system – but that doing so meant he was taking it away from the city because Jackson wasn’t capable of running it correctly. And Reeves said this at a press conference with Lumumba standing next to him looking like a beaten-down loser. Because he is.

And in the immediate case that Carlson’s show segment was about, namely that New Orleans is a dangerous, lawless city where the police barely even function anymore and violent criminals control the streets spreading nightly bloody mayhem on a terrorized population, there’s a way to handle that as well.

You surge state law enforcement agencies into the city and you take that function away from LaToya Cantrell and her clownish police chief, and you squeeze the Soros-backed criminal-friendly local district attorney Jason Williams until he more or less abandons his post and recuses himself from prosecuting cases of violent crime so that you can task the Attorney General’s office with prosecuting criminals down there.

And on a back-channel basis you let it be known that if the local judges resist this new emphasis on law and order, they’re going to find themselves investigated for all the penny-ante corruption so endemic in the urban justice systems that everybody knows about and excuses.

This can be done. It’s expensive, both fiscally and politically, and the local pols will scream about it as though you’re Vladimir Putin invading Ukraine. But as a sheer power play and a reset of the rules of the jungle, it does carry some return on investment.

And if you can clean up the streets of a New Orleans, Baton Rouge or Shreveport, you put those cities back in play as economic competitors of our rival neighboring states – and you get the credit for doing so.

Honestly, this is where the rubber should meet the road in the 2023 gubernatorial election. And if it is, Landry has just seized such a commanding position that it’s questionable whether anybody else, particularly among the Republicans, can dislodge him.