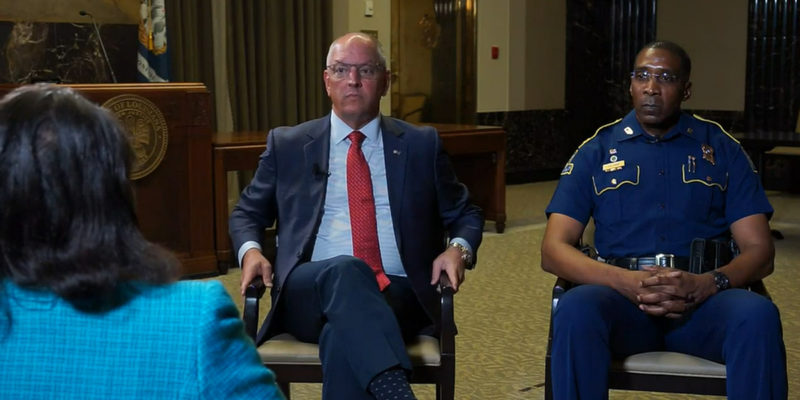 Fox 8 in New Orleans did an interview with Lamar Davis, the head of the Louisiana State Police, and Gov. John Bel Edwards about crime in the city, and just like always we were fed a gigantic diet of BS from these people.

Governor John Bel Edwards and the head of Louisiana State Police say the state is helping fight the crime problem in New Orleans.

Edwards was asked what more the state could do to enhance the crime fight.

“Well, I think going back decades for large events whether it’s Mardi Gras, Essence Festival if there’s a Super Bowl or a Final Four event you’re going to see a greatly elevated presence of the State Police to complement what’s on the ground there but even today there are 150 State Police officers working in the New Orleans area in various capacities, so I don’t want people thinking that we don’t have an elevated number of State Troopers and DPS [Department of Public Safety] workers in New Orleans today because we do,” said Edwards.

He said other areas of the state are experiencing increased crime as well.

“This is a problem across Louisiana and we’re experiencing it in all of our urban areas, not just New Orleans and in fact many of our rural areas, too, have elevated violent crime rates,” said Edwards.

State Police has manpower issues, too.

“We’re about 300 troopers short of what the authorized in-strength is, that limits our ability to do some of the things we have to do around the state one of which is making sure we’re patrolling our interstates and highways because one of the unfortunate things we’ve seen around the country and here in Louisiana since COVID is an elevated number of traffic accidents and fatalities,” said Edwards.

Davis responded to a question about whether the 150-trooper presence in New Orleans could be substantially increased.

“Well, at this particular time, and Sabrina thank you for addressing this but, you know, as we’ve discussed we’re not just short in New Orleans, we’re short across the state and, you know, the state is our responsibility inclusive of New Orleans and as we look at New Orleans, we’re putting in innovative ways to really address the crime there. We’ve brought in more technology,” said Davis.

The most obvious reaction to this excuse-making is how on earth do you run a $40 billion state budget and you’re 300 troopers short of your authorized strength?

That in itself is a colossal scandal.

How is it possible that the Louisiana State Police could be 300 troopers lean when the whole state is in the midst of a massive crime wave that has turned its three largest cities into shooting galleries?

John Bel Edwards has been the governor of this place for more than six years, he’s blown up the state budget from $25 billion to $40 billion, crime has run completely out of control – to such an extent that it’s literally choking off legitimate commerce in our three biggest cities – and he’s overseen a 300-trooper State Police manpower shortage.

Fox 8 didn’t even bother leading with that. They buried the lede in a story which essentially excused Edwards for his gross mismanagement of the State Police.

Which, by the way, killed a motorist in May of 2019 and covered it up to save his re-election that year, something which now has the FBI investigating LSP and it’s only a matter of time before that police force will go under a consent decree that will look a lot like the one which has destroyed the New Orleans Police Department.

Are we really the only people noticing how abysmal a performance this is and demanding better?

John Bel Edwards isn’t doing all he can for the people of New Orleans, 90 percent of whom were stupid enough to vote for him in 2019. He’s doing the bare minimum, if that.

A governor who cared about New Orleans and its devastating crime problem would be staffing up the State Police as an effective replacement for the NOPD, bringing out National Guardsmen to supplement law enforcement in the most dangerous areas of the city, implementing stop-and-frisk policing in places like the French Quarter in hopes of at least keeping the tourists safe and even touring high-crime neighborhoods in the city as a show of strength to indicate that even there the rule of law will inhabit.

He’s doing none of those things. In fact, he and Davis are overseeing the destruction of the State Police as an effective law enforcement agency while the state’s most important city slides into anarchy.

And the local media ignores it completely.

Interested in more news from Louisiana? We've got you covered! See More Louisiana News
Previous Article LACAG: Where Is The GOP On The Livingston Sex-Library Scandal?
Next Article What Jeff Landry And Eric Schmitt Found Out About Censorship Is Scary