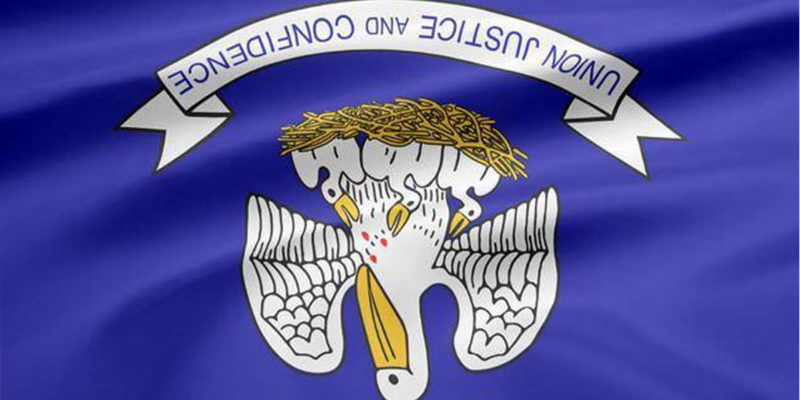 You can dismiss this as speculation if you want, but mark our words – June 9, 2022 might go down as the day Louisiana died.

It’s been sick for a good while, as you know, and things have been getting worse pretty quickly.

But the wheel of events that was set in motion this morning when the Civil Rights Division of the Biden Justice Department showed up in Baton Rouge to announce they’re opening an investigation into the patterns and practices of the Louisiana State Police is going to turn very rapidly. And that wheel is moving in a direction not hard to ascertain.

Federal prosecutors are launching an investigation into Louisiana State Police amid years of reports detailing the beatings of Black motorists at the hands of state troopers, the Associated Press reported Thursday.

We haven’t changed our position on the Ronald Greene case. We’re as horrified about that case and the Louisiana State Police’s actions in beating that man to death on a roadside in May of 2019 as we’ve been since we heard about it. We’re just as horrified about the fact the coverup of that killing – for political purposes – more or less made illegitimate a gubernatorial election held that year, which has had devastating effects on this state.

John Bel Edwards clearly knew the State Police – which he had already corrupted to serve as a praetorian guard for his administration – had killed Ronald Greene back in May 2019. By any rational, reasonable measure it’s impossible to believe Edwards wasn’t informed of all of the circumstances of that killing then or very soon after. He presided over a cover-up of those circumstances so that he could bamboozle the state’s black community into turning out en masse to re-elect him, and they did.

Then he strung that cover-up along for years until finally the state legislature decided to get involved. Meanwhile the State Police was busy committing similar abuses against black people in its roadside custody, all the while Edwards’ handpicked successor to Kevin Steele, the commander who obviously covered up the Greene case, claims there’s no evidence of racism in the state police.

Edwards was supposed to testify in front of the state legislative committee investigating the Greene killing on June 16. Now he won’t, because he called a special session purportedly to rewrite the state’s congressional district maps. As Jeff Sadow notes, that’s a waste of time, because the Obama-appointed federal judge in Baton Rouge who threw out the current map is certain to be overturned by the Fifth Circuit and the Legislature need not, and should not, lift a finger.

But House Speaker Clay Schexnayder announced he was postponing Edwards’ grilling in front of that committee because of the special session. Which is inexplicable weakness on Schexnayder’s part. What he should have done is to say that the session will consist of Edwards’ testimony and not any discussion of the map, and let Edwards complain about that.

So we won’t have Edwards testifying before the committee, at least not for a while, and now we have the district attorney from Union Parish where Greene was killed claiming that he’s moving forward with state prosecutions of the cops who killed Greene, something he says he couldn’t do beforehand because the feds were investigating it, and oh-by-the-way that District Attorney is running as the de-facto Democrat in that race next year.

Plus the feds are now opening a pattern-and-practice investigation of the Louisiana State Police.

And maybe they should. But if you think this is going to be done on the up-and-up, and if you think these people haven’t already predetermined an outcome in this case, you are absolutely kidding yourself.

This is how John Bel Edwards gets himself off the hook for the Ronald Greene killing.

Remember the consent decree then-New Orleans mayor Mitch Landrieu signed with the Eric Holder Justice Department which completely gutted the New Orleans Police Department and made it thoroughly ineffective to fight crime in that city?

Get ready, because Edwards is going to do the exact same thing to the Louisiana State Police before he leaves office in January of 2024. And that consent decree will get signed off on by one of the three partisan Democrat federal judges in the Middle District of Louisiana, quite likely the same Obama-appointed stooge Shelly Dick who’s trying to throw out the congressional map. She, or one of her compatriots on that bench, will do to the Louisiana State Police what federal judge John Parker did to Baton Rouge’s school system all those years ago. Don’t you dare doubt this.

It benefits Edwards to make this deal, and it’s almost certain he’s already made it, because it’ll be his redemption for the Greene case. He will be able to tell the black community that he’s worked to insure black men are treated respectfully by the police, and he will have hamstrung his successor from being able to reform and use LSP as a tool to get crime under control in Louisiana.

When crime gets to a sustained high level, you no longer have an environment in which a functional economy can exist. Professional people and the productive classes flee elsewhere. Businesses close and relocate. And those are the people who vote Republican.

And with the local police departments in New Orleans, Baton Rouge, Shreveport and elsewhere in the state all in miserable condition, every city in Louisiana will remain, and worsen, as a shooting gallery unfit to live in.

Because if the local cops are essentially prisoners underground like the Gotham police in The Dark Knight Rises, the State Police would be the only hope for getting the kind of aggressive law enforcement it’ll take to recapture the streets from the armed thugs staging Fast & Furious re-enactments on Louisiana’s streets when they’re not ripping the arms off old-white-lady carjacking victims or executing 12-year-olds with bullets raining in through their bedroom windows.

And if you think you’re safe because the local sheriff in your suburban parish still runs a capable force, ask yourself this: what happens the next time the Jefferson Parish Sheriff’s Department roughly handles some barbarian from Orleans who came across the parish line to spread some Big Easy mayhem?

DOJ is already investigating the LSP now. It’s nothing for them to expand that investigation and demand your local sheriff sign a consent decree.

Don’t think this can’t happen. It already has. In fact, it’s already happening by various means all across the country.

It’s so bad that this week the voters in San Francisco, of all places, tossed the neocommunist, Soros-funded local DA Chesa Boudin because he wouldn’t prosecute the criminals tearing that city apart. And San Francisco is safe as houses compared to New Orleans and Baton Rouge and Shreveport.

All of the people who control what happens next are Democrats. They’re going to make deals to benefit themselves politically. And you will be left in the lurch without public safety and without an effective means of law enforcement.

When this happens, Louisiana will be unlivable. It nearly already is.