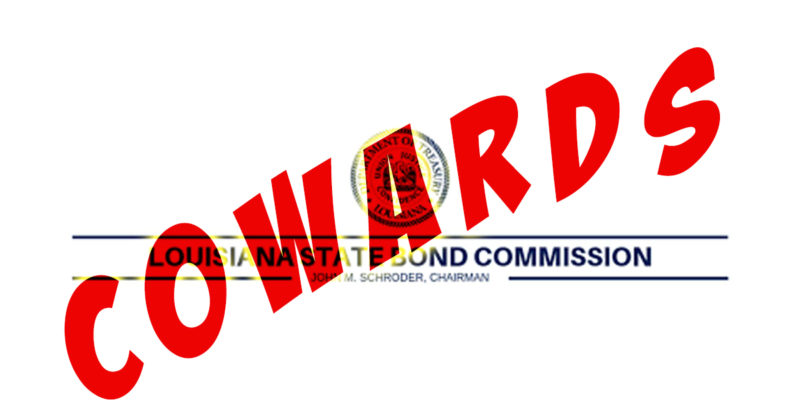 Well, it was a good run for the two months he managed it, but in the end Attorney General Jeff Landry’s campaign to hold the feet of New Orleans’ renegade leftist government to the fire fell victim to the gaping leadership vacuum which exists in state government.

You can watch the State Bond Commission’s collapse on the issue here. It starts at about an hour and 39 minutes in and it goes on for more than 45 minutes. We won’t take you through a blow-by-blow description of what happened; we’ll just suffice it to offer up a couple of lowlights.

There was Lt. Governor Billy Nungesser, who showed up at the Bond Commission for the first time basically ever (he usually sends somebody as a proxy to handle the boring work of the Commission he’s a member of), in order to announce (falsely) that he didn’t know about the votes his proxy had made to hold up funding for a drainage project at the Bond Commission. And that he was hereby changing his vote because he was against holding up flood protection.

In case you’re coming in at the end of this conversation, it’s about the state’s abortion ban. When Roe v. Wade was overturned, Louisiana’s abortion laws were triggered into effect and now abortion is illegal in the state. But the entire political class of Orleans Parish, from the mayor to the city council to the district attorney to the sheriff, have publicly said they would refuse to enforce any abortion ban and they’re committed to keeping abortion going in New Orleans.

That’s an empty statement. We all know it. But it’s an open challenge to a duly-enacted state statute from a municipality which is – defined by its murder rate – the most lawless major city in America.

New Orleans is an open, bleeding, infected sore on the state of Louisiana right now. If ever there was an example to be made to enforce state sovereignty, it would be that the State Bond Commission would freeze funding for that city’s renegade leadership’s projects until the renegades are made to submit to state law.

And for two months, the Bond Commission voted (12-2 the first time and 7-6 the second time) to defer a $39 million or so Sewerage & Water Board project in order to demand that submission.

And instead, the Bond Commission caved and funded the project. Those votes for the last two months were for nothing.

The other lowlight at the hearing was the clownish House Speaker Clay Schexnayder asking if any laws have been “broken” by New Orleans’ officials declaring they will refuse to abide by state law. He equated this to somebody saying they’re going to rob a bank but not actually robbing it yet.

What if LaToya Cantrell, Jason Williams and Susan Hutson put out a press release saying they would refuse to arrest, prosecute or jail someone who robs a bank? What would Clay Schexnayder say to that?

Because it’s a very precise analogy. Louisiana state law now says that performing an abortion is a criminal act just like robbing a bank is, and the New Orleans cabal has said they favor that criminal act.

What we saw at that Bond Commission hearing was essentially that Louisiana’s entire leadership structure, minus Landry in this case, is a pot full of wet noodles. It’s a bunch of used car salesmen, not statesmen.

Let’s be clear here – every one of these people on that Bond Commission, save for John Bel Edwards and his minions who were against sanctioning New Orleans in the first place even though it is literally Edwards’ job to force New Orleans’ compliance with state law, voted to delay funding for those projects in an effort to bring New Orleans to heel.

State treasurer John Schroder bitched about it and called it “playing politics,” which was completely wrong – it’s New Orleans who’s playing politics here; the sanctioning of the city in order to bring it in line with the rest of Louisiana is a response to those political games – and even he voted for the delay.

And now they’ve all switched their votes.

By switching their votes, these Republicans have now shown that they were the ones playing politics. They had zero principle behind their initial votes; they did it because they wanted to jump aboard for some quick headlines.

But not to actually mean it.

So what signal does that send? It sends the signal that Louisiana’s voters can provide supermajorities in the state legislature and among statewide officials for the GOP, vote in as many supposed conservatives as possible, but if there’s a Democrat governor all of those Republicans in the room make not a scintilla of difference.

And that all the leftist radicals need to do is stand firm and they’ll win no matter what the vast majority of Louisiana’s voters think. They have the power, not the majority.

That’s what came out of that Bond Commission meeting.

It was shameful and dangerous.

Louisiana’s status quo isn’t good enough, you know. We’re in free-fall. Our cities are shooting galleries, our economy is a disaster. Outmigration is draining us of talent, jobs, capital, productivity. We don’t – and increasingly can’t – enforce the law. Just last week an LSU student in her car waiting for a train to pass, on Government Street in Baton Rouge just east of downtown, was gunned down for no other reason than she was a white girl who could be killed easily. Everyone is outraged, nobody does a thing. The criminals even stole a cross someone had laid at the scene.

And New Orleans is the murder capital of America.

Times like these call for steely-eyed determination and a willingness to stand up for law and order. What we know now is that Schroder, Nungesser and Schexnayder don’t have it. Our leadership vacuum is greater now than at any time in memory.

Give Landry credit for at least being willing to go down with a fight. So far he looks like the only one of the candidates for governor in 2023 who’ll do anything but maintain the awful status quo.

Interested in more news from Louisiana? We've got you covered! See More Louisiana News
Previous Article Clay Higgins Is Most Definitely Not The Bad Guy Here
Next Article SADOW: Unprincipled GOP Bond Commissioners Sell Out On Rule Of Law