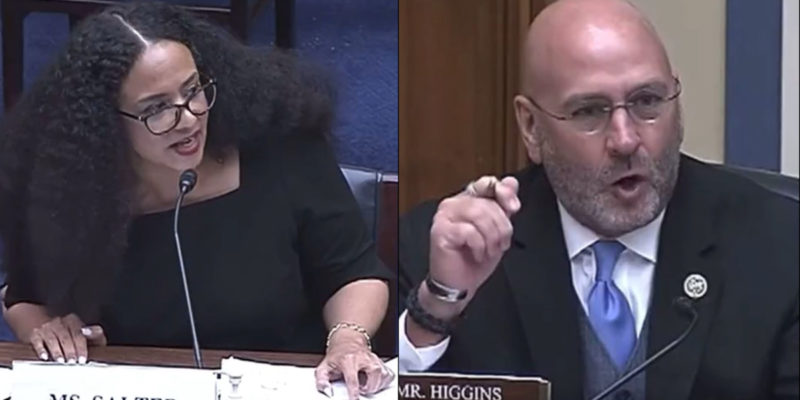 If you didn’t see this exchange between Rep. Clay Higgins and an insane woman named Raya Salter, who is the executive director of something called the Energy Justice Law and Policy Center, you probably should.

Particularly if you live in Louisiana.

Raya Salter is a moron who lives in a state of delusion, and she shouldn’t be relevant to your life at all. Frankly, it’s worth questioning whether she shouldn’t be in a mental health facility. But instead, she’s a lawyer who goes to court to try to destroy our economy.

The Energy Justice Law & Policy Center, or EJLPC, is the nation’s first energy justice public interest law firm and justice center and is led by a Black woman. We work with local communities to address harms caused by energy systems while catalyzing a just clean power transition.

EJLPC believe that communities have the solutions to our climate, energy and environmental justice challenges.  EJLPC makes the connection between law, policy, people and power. We hold space for policy co-creation, dialog, action and education to ensure full community participation in all energy decision-making. We also engage policymakers and decision-makers to drive the solutions we wish to see at scale. We have offices in New Rochelle, NY and Birmingham, AL.

And what brought on the confrontation you’ll see below was the fact the Democrat majority in the House called this woman to testify on climate change and the evil of the oil and gas industry. She proceeded to accuse the oil companies and the petrochemical industry, without whose products not even a sliver of modern life could be lived (think about how far you could get into your day without plastics, for example), of mass murder.

We won’t excerpt the idiocy of her testimony. You’re welcome to read it here if you want. It’s 10 pages of the dumbest, most offensive, over-the-top left-wing gibberish you’ll ever seen, but you’ve heard it all before.

But because Raya Salter is black, she has to be treated with deference and respect.

And that’s actually what Higgins does, or tries to do, but the second he tries to challenge any of her narrative Salter begins screaming like a banshee and essentially attacks the whole state of Louisiana on the basis that our petrochemical industry kills black people.

This she’s able to do with impunity, but when Higgins objects, he’s upbraided by the chair. And by AOC, who whines about how mean he is.

Here's the heated exchange between Rep. Clay Higgins (R-LA) and Raya Salter, who is executive director of the Energy Justice Law and Policy Center.

And of course, the headlines from this dust-up are all about how Clay Higgins is a bad guy because at one point he calls her “boo,” which is a friendly term of endearment in southwest Louisiana, and refers to her as “young lady,” which until five minutes ago was considered respectful.

Should he call her “bitch” going forward? As in “Bitch, please?” It seems as though that might be a reasonable response to the concept that Louisiana should give up the petrochemical industry and the more than 200,000 jobs it sustains in our economy.

Somehow Clay Higgins is the bad guy in this exchange. If that’s true, then we’re for the bad guys. The “good guys” want to destroy our modern economy and plunge us into a Dark Age in which our lives will be nasty, brutish and short, for the sake of “the planet” which doesn’t seem to be all that much affected by things we do.

The real question is why we have a majority in Congress which gives a forum to unhinged, impolite morons like Raya Salter who can’t defend their radical positions without screaming. Hopefully that majority is short-lived.