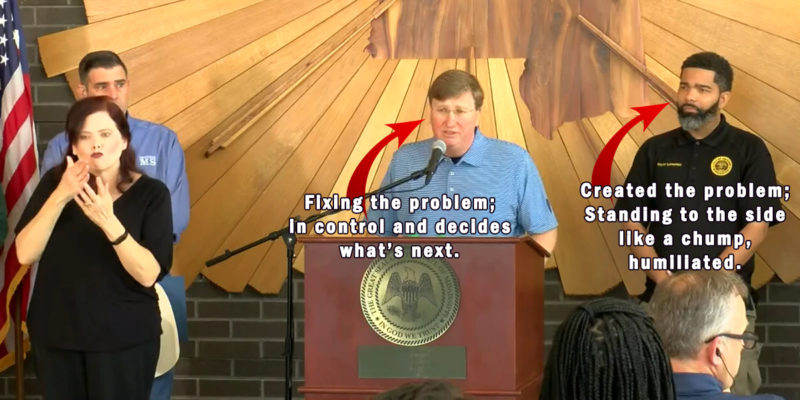 We’ll start this piece off with an excerpt from a column I wrote last week at The American Spectator talking about the water system failure in Jackson, Mississippi and how it’s a product of the all-too-visible phenomenon of Weaponized Governmental Failure…

Most of our readers probably haven’t heard about this, but the failed city of Jackson, Mississippi, which has been run by hard-left Democrats for more than 30 years, is in such advanced decline that its water system no longer produces potable drinking water or even safe bathwater.

It’s a similar situation to what happened in Flint, Michigan, another city where incompetent urban Democrats destroyed public infrastructure through abuse and neglect.

And just like in Flint, the culprits, museum-grade practitioners of the Weaponized Governmental Failure that pervades urban Democrat politics, have taken to blaming white Republicans in the suburbs for their problems.

Given the years of neglect to the infrastructure of the state capital – a city that should be the proud shining jewel of the Magnolia State – it is no surprise the state government of Mississippi has ignored the city’s problems with its water system to the point of an absolute failure of the system. Now, unlike the warm water that flowed from Jim Crow era “colored” water fountains, the people of Jackson have no drinkable water at all. It is almost as if Jackson is being told to drink from the “colored” water fountain all over again, except this time drinking the water might make you deathly ill.

The particulars of this moment in Jackson’s water crisis involve complexities at the municipal and state level, but this isn’t the first time – far from it – that this city’s residents are suffering like this. One could understandably ask, as a number of my fellow writers did of me while they were in Jackson: How could a state ignore the needs of the residents of its capital city and allow things to deteriorate to this point? The answer as I see it is simple: racism.

Jackson is a Black majority city and Mississippi is governed by a White Republican supermajority that refuses to invest in Jackson because of who lives there and who governs it. The message derived from the ways Mississippi’s politicians have refused to support the crumbling infrastructure of Jackson again and again over the years is not much different from the late Sen. James K. Vardaman referring to Mississippi’s Black citizens as “lazy, lying, lustful animal[s], which no amount of training can transform into a tolerable citizen.”

Got that? It isn’t willful incompetence and outright theft of the public infrastructure dollars that has broken the water system in Jackson, it’s RACISM.

That sure is convenient, no?

Friends there tell me it’s been five years since the water service in Jackson sent anyone an even remotely accurate bill, and nobody gets their water shut off for non-payment as a result. But this, per the esteemed ruling-class stooge Eubanks, is the fault of the “White Republican supermajority,” which won’t invest in Jackson because the city is more than 80 percent black.

Chokwe Antar Lumumba is the mayor of Jackson, “the most radical city in America.” He’s the son of somebody else named Chokwe Lumumba, who was also mayor. Both Lumumbas have been part of a casual movement that seeks to create an independent “Black nation” in the states of the Deep South.

What sort of independent nation can you build when it’s the responsibility of the racist crackers in Madison and Rankin counties who saw what time it was and got the hell out of Jackson to subsidize the busted, dysfunctional Lumumbite water system there?

It’s an old game by this point, and now we see how it’s won:

This morning, I spoke with Mayor Lumumba regarding the water crisis in Jackson, Mississippi.

I’ve declared a state of emergency and FEMA, EPA, and the Army Corps are coordinating with the state to get clean and safe water to families. pic.twitter.com/xV6bcZK2TU

Because the feds will always ride to the rescue after the Weaponized Governmental Failure crowd are done with their work. And before it’s over this will be Mississippi Gov. Tate Reeves’ fault just like it was Rick Snyder’s fault when the urban Democrats who killed Flint’s water system were exposed.

Republicans need to get better at this game. Reeves and Mississippi’s Legislature need to seize control of Jackson’s water system before a single dime of state money is spent to fix it. Call a special session, pass a bill, and make it a state function which may or may not get privatized.

Emergency basis, by the way, and thus no MBE contracts. No special favors for anybody — competence, not complexion or connections, ought to rule the day.

It turns out that Tate Reeves, the governor of Mississippi, either read that column or this is a case of great minds thinking alike, because he’s choosing the revivalist path rather than the Stupid Party path in dealing with the Jackson water crisis.

At the same time, he is taking the city to task for failing to maintain the facility and calling on the state to take action, saying he is even open to seeing the city’s system privatized.

“I’m open to all options. Privatization is on the table,” he said. “Having a commission that oversees failed water systems as they have in many states is on the table… There have been even a number of city council members that I have seen over the last several weeks that have talked a lot about the need to hire outside contractors to come in and run different pieces of or the system as a whole.”

“I think you’re seeing more and more individuals recognize that the operations of city government in general, but particularly the operations of the water system… it ain’t Republican or Democrat or ideological, it’s about delivering a basic service to the people you represent,” he said.

Wait for it. Here comes the punch line…

“The immediate crisis for which the state has come in and taken over O.B. Curtis is a direct result of the lack of operators, the lack of staff, and the lack of mechanics and the lack of people,” he said. “Basic work to maintain the facilities was not done because the few heroic staff in that plant had been abandoned.”

Reeves blamed the city’s water woes on other issues as well, including a lack of investment and a lack of collections on its billing system. Jackson has been struggling to collect water bills for years, in large part, due to complications with the Siemens contract. The city is now replacing the meters that were put in place as part of that deal.

Going forward, Reeves said it’s now time to develop a plan to deal with Jackson’s water in the short and long-term.

“I personally believe that we cannot depend upon the city of Jackson to provide that. And therefore, we are going to work with our state and federal partners and with input from the city to develop both intermediate and long-term plans,” he said. “Obviously, as we move into the intermediate and long-term planning, there’s got to be a serious conversation, and the state legislature will be involved and engaged in that.”

The city of Jackson had so mismanaged the water system that what competent people were in charge of the O.B. Curtis water treatment facility and the other plants tasked with providing running water of a potable quality had mostly left. And the supposed “disinvestment” of the “White supermajority” that Eubanks whined about is actually a water system left broken and broke because it can’t and won’t collect on water bills.

A private consortium went to Lumumba years ago with a multimillion dollar up-front offer: they’d buy the water system outright from the city, fix it up and professionalize it, and run it as a profitable enterprise. Jackson’s water system used to turn a $20 million profit every year before the Lumumbite gang took over.

Lumumba turned them down, and proceeded to grind the water system into dust.

So what needs to happen now, and you’re seeing Reeves signal that it will, is that this asset ought to be taken away from the city of Jackson and either run by the state of Mississippi or privatized.

Because that’s the answer to Weaponized Governmental Failure. Intentionally allow public infrastructure or the tasks of basic municipal governance to go unmaintained, in an effort to chase of middle-class voters who might vote against you, and watch those middle-class voters get their revenge by taking away those functions and assets once you’ve crashed them – and now you don’t have the ability to appoint cronies and nepots in those jobs anymore.

Because remember – this is all about creating crisis so you can (1) shift blame onto Republicans for “racism” or whatever other hobgoblins you can sell the legacy media on, and (2) draw down big chunks of federal money that you can then steal and dole out to your friends. It’s far more rewarding than actually doing to job these resources were for in the first place.

Taking the toys away, like Reeves is doing, together with an open humiliation of the mayor with him standing right there, is how you work the problem.

This can work with water systems, with roads, with law enforcement, with schools, with fire departments, historic landmark preservation, you name it. It can also work with higher education, another venue where Weaponized Governmental Failure is hard at work.

And as revivalist Republicans shake off the tradition of passive Stupid Party governance, it starts to become possible that one might break the hold the Hard Left has on so much of America.

Good for Reeves. He learned the lesson from Michigan’s former Republican governor Rick Snyder, whose weak response to a similar water crisis in Flint was an exercise in what not to do. Taking the water system away from Lumumba and his purposeful incompetents sends the right message.