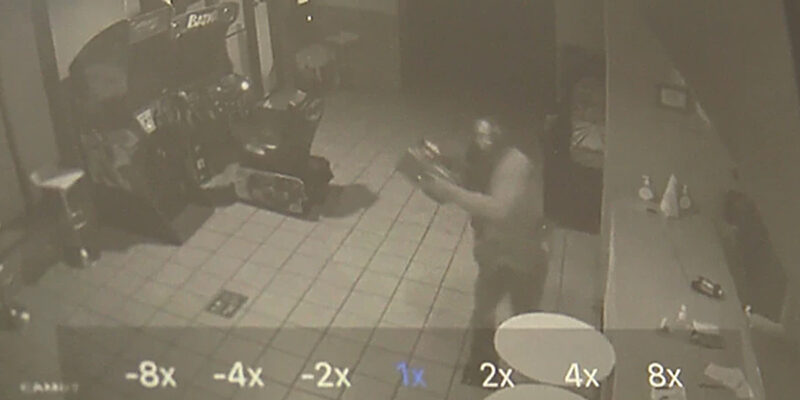 Hassan Abualbassan has had a rough month and says he’s fed up.

The owner of Who Dat Wings & More on Earhart Boulevard in Gert Town said he was woken Saturday (Oct. 8) around 5:30 a.m. by a phone call from his security provider, alerting him that someone had once again broken into his business. The burglar caused thousands of dollars in property damage and made off with a cash register containing more than $1,000.

“That’s happened to the business for the third time this (past) month,” Hassan said. “The security company called me to say the police didn’t pick up (when they called). Then, I came at almost 8 o’clock and the police did not show up until like 8:30.”

Hassan showed Fox 8 the damage, along with surveillance video that captured the crime. The restaurant’s glass front door was smashed out. Inside, loose change and a few dollar bills littered the floor.

“I’m doing my best to protect my business,” he said.

This isn’t Hassan’s only business being targeted.

He said that three weeks ago, at least three burglars broke into his beauty supply shop just two doors down. The group ransacked the store, escaping with more than $20,000 in stolen merchandise.

Between his two businesses, Hassan said he’s been robbed four times in the past month and five times overall since August.

“It’s bad,” he said. “I would hire security to sit and watch my business, but it’s too much money.”

And then comes the money quote…

“I’m thinking, ‘I wish I could sell all my property in New Orleans and leave,’” he said. “Because it’s not safe, it’s not normal. There’s too much drugs.”

It isn’t really that complicated. The lousy neighborhoods are food deserts – they’d say Gert Town is a food desert even with Aboulbassan’s wing place open, because the crunchy leftist women who invented the concept of food deserts don’t consider it food unless organic kale and cox’s orange pippin apples are available – because they’re commercial deserts and places which sell food are commercial places.

And you get commercial deserts when the locals kill off all the commerce by robbing the places over and over again.

This is why the people who do have businesses in places like Gert Town have names like Hassan Aboulbassan. They’re immigrants from countries where the kind of violence to people and property you see in the awful parts of our cities is pretty commonplace; where they come that violence is generally doled out by the government, but it’s there.

And so they’re willing to take the risk of losing their money or their lives just to sell cigarettes, beer, Doritos and chicken wings to the poor in those neighborhoods, at least until the locals make it unpalatable to continue.

There’s a long-standing complaint in the black community which has it as a shame that all the convenience stores and fast-food shops which make up the bulk of what commerce remains are owned by Koreans and Pakistanis and not black people. And that complaint is a valid one.

Except that the black people who would own those convenience stores, the ones with the entrepreneurial spirit, work ethic and organizational know-how to manage a retail establishment, already know the score in places like Gert Town. They know what the locals are like and what the culture of the place does to somebody trying to make a living in a brick and mortar business there.

And rather than take the plunge into business, they stick it out in a job until they can afford to move to the suburbs. And once they hit the suburbs, they are out and gone from places like Gert Town.

There’s a solution to this. It’s simple, but it isn’t easy. The solution is for the city police to descend on Gert Town like an invading and occupying army, squeeze the place until all of the career criminals are rounded up and sent off to prison or have fled, and then a tax incentive is laid in for private investment to come in, buy up as much of the crappy housing as possible, and gentrify the place.

That works. It really does. But urban Democrat machine politicians don’t like it, because it breaks up the vote farm they’re running in a place like Gert Town. So while a healthy city will constantly pressure its worst areas as opportunities for renewal, few of our cities are healthy and the opposite happens – middle class areas become crime-ridden slums and the police become less and less competent to manage the chaos.

We wish Mr. Aboulbassan well in his endeavors far away from the slums of New Orleans. May he never be assaulted by criminals bent on looting his businesses again.