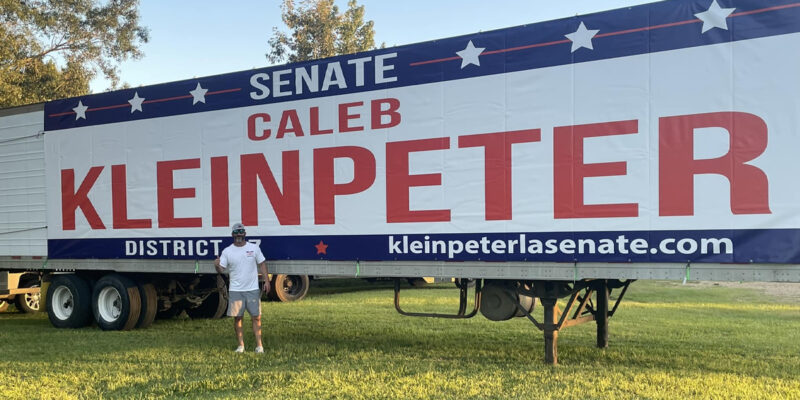 Many people know that the Louisiana Citizen Advocacy Group (LACAG) is the child of shock, awe, and desire: shock at the harm done to Louisiana citizens by too many weak legislators, awe at the true courage shown by some of them, and desire to affect both groups. It is in this spirit that LACAG is privileged to weigh in on a critical election set for November 8th.

Lacombe is a decent man and by all appearances a good husband and father. Yet, in the Legislature he has acted and voted consistently against many of the core values of Louisiana citizens.

I’ve seen it up close. I was there. During the 2021 Session, Governor Edwards vetoed a massively important bill to prohibit men from competing in women’s sports. The Legislature convened a veto override session, and Lacombe voted against overriding the Governor’s veto, which failed by two votes. If he and the atrocious Joe Stagni had supported the veto override, the bill would have passed. It is clear that Lacombe did what the Governor told him to do, and in doing so he jeopardized the integrity of women’s athletics and betrayed the values of Louisiana citizens.

Just this year Lacombe opposed legislation that would have prohibited student indoctrination in concepts like gender identity and transgenderism, despite the broad national effort to do just that.

Lacombe also voted against important school choice legislation, which means that many of our children will remain in the failing public school system at a time when they desperately need and deserve a different path. Louisiana is near dead last in public education, despite the best efforts of many teachers who function under the heel of a woke and corrupt education bureaucracy. Lacombe would keep many of our brightest students in an atmosphere of mediocrity and failure.

Lacombe opposed legislation that requires Louisiana public school students to have special instruction on World War 2 and the Holocaust, including the heroic role played by the United States in liberating Europe from Nazi tyranny. The instruction includes the exceptional performance of Black American soldiers like the Tuskegee Airmen, and provides free access for students to the World War 2 museum in New Orleans. We owe the World War 2 generation a debt that can never be fully repaid. It is not hyperbole to say we owe them our very freedom. Lacombe’s failure to support legislation that provides special instruction in that most important part of our history is disqualifying.

Lacombe has consistently failed to oppose vaccine mandates, despite the admission by both the Governor and the Louisiana Department of Health that the experimental COVID shot prevents neither the contraction nor transmission of COVID, and despite increasing evidence of its adverse effects. Our constitution nowhere allows the government to dictate to private citizens what medical choices they must make. Apparently Lacombe disagrees. There isn’t enough space here to cover the broad range of important issues on which Lacombe’s record discloses an antagonism to the core values of his constituents.

Caleb Kleinpeter did combat tours as a Marine in Afghanistan and Iraq. He enlisted shortly after 9-11. He is a small business owner, husband, and father. He is a constitutional conservative and fighter for good government. He will be a faithful and effective legislator with the courage to help move our State forward. LACAG is pleased to recommend him, and we encourage you to vote for him on November 8. Our brightest days are ahead of us.