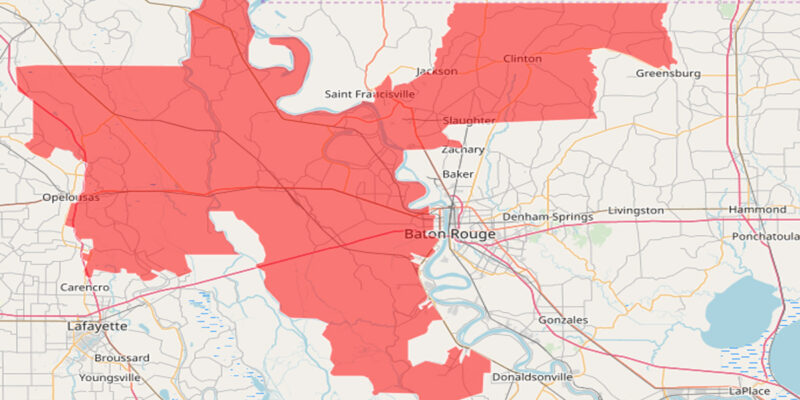 Very, very little attention has been paid to the special election in Louisiana Senate District 17, which was vacated when the incumbent Rick Ward, who was going to be term-limited after next year anyway, gave up the seat to become a lobbyist. Ward was a Republican, but he’d originally been elected to represent District 17 as a Democrat and he came from a Democrat family and a political machine/courthouse gang in West Baton Rouge and Pointe Coupee Parishes which is known as, essentially, one of the last bastions of blue-dog white Democrats in Louisiana.

The district comprises a fairly large swath of territory from the northern parts of the Florida Parishes east of Baton Rouge running west into the Atchafalaya Basin west of the city, but its heart has traditionally been in West Baton Rouge and Pointe Coupee.

There are lots of Edwin Edwards fan remnant types hanging around False River. So the conventional wisdom is that part of the state will still produce those old-school “conservative” Democrats – who are “conservative” in the sense that they’ll toe the pro-life and pro-gun line but will vote for every expansion of taxes and government overreach under the sun.

Which perfectly describes Jeremy Lacombe, the first-term state representative from that area who’s been considered the favorite to win the District 17 special election next week. Lacombe was elected, also in a special election, back in 2019, after throttling Republican Tammy Fabre with 69 percent of the vote. You’d think with a number like that he’d be unbeatable in a special election and move up to that senate seat.

But, as Billy Joel sang, something happened on the way to that place.

This popped out today, and it’s the culmination of some things which have rumbled fairly loudly under the surface…

BATON ROUGE, La. — This week, the Louisiana Republican Legislative Delegation officially endorsed Caleb Kleinpeter in the upcoming election to fill the vacancy in Senate District 17. His leadership experience as a businessman, Marine Corps Veteran and Parish Councilman will be invaluable to our state as we work in Baton Rouge for a more prosperous Louisiana.

“I know Louisiana energy is the key to fighting inflation and bringing down the price of gas. Caleb Kleinpeter started his professional career in oil and gas. He will use that experience to help our state government manage an industry that is the foundation of our state’s economy. Louisiana has the natural resources for a prosperous future; by electing candidates like Caleb Kleinpeter, we’ll have the leadership for it too.”

House Republican Leader Blake Miguez spoke highly of Kleinpeter’s military service, and what it would mean to the Republican Delegation moving forward.

“Louisiana Republicans have to be comfortable leading from the front, and candidates like Caleb Kleinpeter already know how to do that. Caleb enlisted in the Marine Corps just three months before the deadly September 11th terror attacks, serving multiple combat tours in both Iraq and Afghanistan. As state senator, he will continue to serve by fighting for a transparent and responsible state government.”

The legislative delegation endorsement follows a similar one from the LAGOP. And Kleinpeter is catching some support from the Louisiana Committee for a Conservative Majority, which has been dropping mail for him.

Kleinpeter wasn’t given a great chance to win this race but he’s covered the district with his yard signs and he’s reportedly been polling shockingly well. What’s more, Lacombe supposedly has been running into one road-block after another with voters in trying to campaign, for a couple of reasons.

First, that the voters in District 17 are so angry at Democrats both nationally and at the state level that most have them have told Lacombe they’ll never vote “D” for anything ever again.

And second, that Lacombe’s failure to vote for an override of Gov. John Bel Edwards’ veto of that girls’ sports bill has made him unelectable.

There’s a third candidate in the race, Kirk Rousset. He’s an ob-gyn in Baton Rouge and a Republican, and Rousset has put some money into the race – specifically to buy TV ads, which is a pretty hefty expenditure for a state senate race in a district on the fringes of the Baton Rouge TV market. It isn’t a bad ad.

Some have said Rousset is a spoiler in the race, but with that messaging it’s hard to see how he’d help Lacombe even if he wanted to.

It looks like there would be a runoff in District 17, and if there is, Lacombe might well be sunk by the red wave.

But maybe there wouldn’t be one. Early voting in Louisiana has been awful for Democrats. Statewide, of the 363,000 early votes cast, the breakdown was 43.4 percent Republican, 41.6 percent Democrat and the rest independents – a breakdown which has never happened in early voting. Democrats always vote early and Republicans vote on election day, so if there are more Republicans voting early this year it’s a wipeout.

And in District 17 it could be the same thing.

Early voting stats are reported by parish, rather than by legislative district. But the numbers haven’t been great in the parishes District 17 picks up.

Those might not look like great numbers on the surface for Republicans, but here’s the thing – they’re a lot closer than you’d expect out of early voting. Only in Iberville and Pointe Coupee do Democrats make up a majority of the early voting. And those are a lot of Democrats who’ll vote for Donald Trump and John Kennedy, to boot.

So we’ll see what happens on Election Night next week. But right now we’re going to predict Lacombe is going to get stuck in a runoff with Kleinpeter, and if he does we don’t think he can win.

You can consider this a data point in the red wave. We’ll see if it pans out that way. But a couple of months ago it was assumed this would be a seat that flipped from R to D, and right now that looks a lot less likely – and if Kleinpeter wins, he’s expected to be a good bit more conservative than Ward has been.

Interested in more national news? We've got you covered! See More National News
Previous Article It’s Fun To Watch Royce Duplessis Play The Race Card On Mandie Landry
Next Article BAYHAM: The Vichy GOP And Their Attempt To Save Pelosi And Schumer