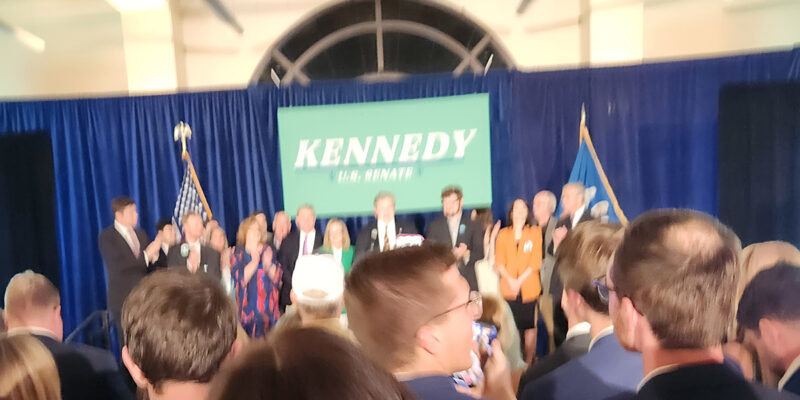 Federal elections on Nov. 8 in Louisiana yielded mostly predictable results, which meant the crisis among the state’s Democrats intensified dramatically.

None of the federal level races were expected to be competitive, and that’s what transpired. Four of the five congressional districts at issue (in the Fourth District Democrats didn’t even bother to field a candidate against Republican Rep. Mike Johnson, and nobody else contested it) had solid GOP voting majorities going in, with the remaining Second District dominated by Democrats who didn’t send up any competition against the Sixth District’s Republican Rep. Garret Graves.

Thus, out of the three others, two drew a couple of weak Democrats and the First District’s GOP Rep. Steve Scalise drew just one. There turned out the Democrat who did the best of the bunch, best known for pushing a bizarre narrative that in order to kill babies you had to have one by cutting a campaign commercial that faked real-time coverage of her giving birth. She drew just 25 percent, although in the Fifth District Democrats combined there did a bit better while GOP Rep. Julia Letlow cruised to a win.

And supposedly the most endangered of all Republicans, the Third District’s Rep. Clay Higgins? He did win with the lowest amount, just 64 percent, more than 50 points better than the runner-up.

As a result of the Republicans easily taking the House of Representatives, Louisiana now finds itself in rarified air. Only six years ago some observers chose to fret over the relative paucity of seniority among the state’s members in Congress where the GOP held power. No longer; four of its House delegation are six years farther along with Scalise ascending to the second-ranked spot in the chamber and Johnson now to take the number five slot.

However, Democrats’ infirmity in the state really hit home with the reelection of GOP Sen. John Kennedy, another 2016 rookie now six years along. Bad enough for them he won without a runoff; worse came the ordering and vote proportions of him and the three state party-endorsed Democrats.

Without any chance of victory, state Democrats’ best showing would have been to push the contest into a runoff, which didn’t happen. Next best would have the white Democrat preferred by the party’s white minority that disproportionately funds and controls its partisan activities, newcomer Luke Mixon, to finish second and outpoll combined the other two non-minor black candidates in the race, former congressional candidate Gary Chambers and newcomer Syrita Steib. That pair campaigned on a narrative more heavily weighed towards assigning blame for problems in America to racial oppression.

More disastrous would have been the black candidates combined receiving more votes than Mixon, as that would demonstrate an inability of party powerbrokers to control the mass base despite their preferred candidate outspending the pair. Utter catastrophe for the present party powers-that-be would have ensued if one or especially both relegated Mixon to third or fourth place.

As it turned out, the catastrophic scenario played out. Steib, who in polling had her intended vote actually running ahead of her likeability, cratered but Chambers, who had the highest approval rating among nonwhites, dusted Mixon. Reinforcing this, Kennedy gathered 63 percent, well above his polling.

For a decade, the white populist liberals and their black allies who have lorded over state Democrats for decades have seen their candidates’ electability steadily decrease in most of the state and statewide, certainly for federal office. Nov. 8 may have signaled they are past the point of resuscitation unless they make major changes to their political agenda.

Interested in more national news? We've got you covered! See More National News
Previous Article MARSH MAN MASSON: This Area Has Speckled Trout Every Cast!
Next Article Caleb Kleinpeter Might Be The Best News Of Election Night In Louisiana