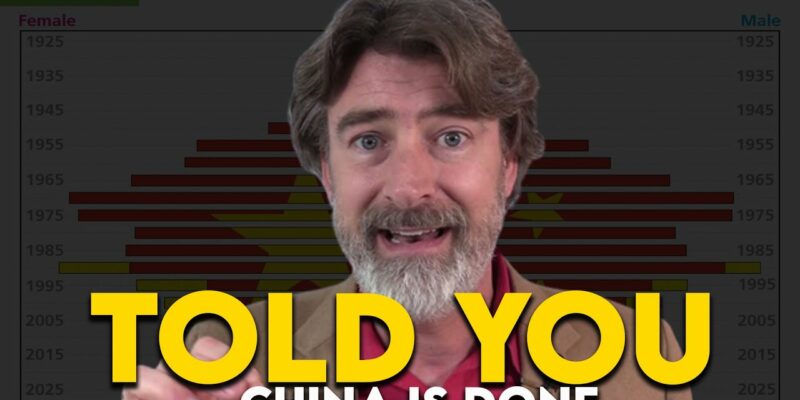 That’s the position taken by Peter Zeihan, the famous author and geopolitical analyst. Zeihan appeared on Joe Rogan’s podcast a few days ago and blew a whole lot of minds by making the case that China is on course to crash completely as a nation within a decade.

His statements, distilled into an 8-minute video…

Well, Zeihan isn’t wrong by any means when he talks about demography. The disastrous one-child policy the communist regime in that country put in place has kneecapped two generations of Chinese citizens in terms of family life, because when you couple restricting families to having only one child with the Oriental/East Asian culture which favors sons over daughters, what you end up with is a surplus of more than one million men compared to women in China.

And when you couple that fact with the xenophobia inherent in Chinese culture, in which non-Chinese people are looked down upon, you won’t have that surplus made up for by Chinese men looking around for non-Chinese wives. You just have scores of millions of Chinese men who’ll never be married and have children.

The communist regime in China restricts childbirth to married couples only, and the imbalance between men and women in China means many, if not most, Chinese women see men more as sugar daddies than husbands. Some 45 percent of urban women in China say they’ll never marry.

If you remember the dystopian horror movie Children of Men from a few years ago, in which society collapses because the world becomes infertile, it’s actually playing out in slow motion in China. Demographers in that country are warning that by 2065 China will have half its current population, because the current 1.5 billion Chinese will grow old and die and there won’t be future Chinese to replace them.

Remember, the rule is you need 2.1 children per female in a nation just to replace the population. China has held that number down to half the replacement rate by law, and cultural trends are making it even worse even after they’ve abandoned the one-child policy.

Zeihan thinks the demographc problems will be exacerbated by China’s trade problems. They’ve built an export economy, but at base China’s value proposition to the world is that it makes cheap finished goods in exchange for food and fuel from the rest of the world. They’ve obviously progressed beyond that point in recent decades, and nowadays Chinese goods aren’t actually cheaper in many respects than those from Mexico, Vietnam or other countries, but fundamentally, the value proposition remains.

Because as Zeihan says, China can’t grow enough of its own food. And China absolutely doesn’t have enough fuel.

So if he’s right that the Russian oil production begins to fall off for lack of Western technology pouring in to keep it going, and Russian petrochemical products like fertilizer don’t get out to the world, and China is the largest importer of food and fuel, Russia’s economic collapse is China’s collapse. And that would mean famine would accelerate what demographics would ultimately wreak upon China.

We can’t say that’s what’s going to happen. What we can say, as followers of Austrian economics, is that the Chinese have operated from a fraudulent economic model for a long time and it’s only been Western countries propping them up which has kept that model from implosion. You already know about all the ghost cities the Chinese have built in the middle of deserts and other otherwise uninhabitable lands; the money to build all of that unwanted infrastructure is money that could have been spent on items people needed.

Austrian economics holds that the risk of economic pain doesn’t come in a recession. A recession is when the bad investments are liquidated and the money is redirected into more profitable projects and endeavors. The problem is when times are good, and the irrational exuberance of investors leads to stupid investments being made.

But that’s in a market economy, when there are countless people making these decisions and therefore the risk of malinvestment is spread out.

In China, which is a state-directed economy where the Communist Party is effectively making all the decisions, the risk of malinvestment is total.

So they’ve destroyed their real estate sector. They’ve short-circuited their tech sector by screwing over the Americans and others who did business there and thus put themselves in a position where they have to steal other people’s intellectual property in order to bring technological advances to market. They’ve built an economy on lies which isn’t any longer generating real growth and prosperity for their people, and that’s causing political unrest.

And China’s infliction of COVID on the world is coming back to bite them exceptionally hard. Their cities are on lockdown because their efforts to stop the spread of the virus, rather than building the kind of herd immunity that more open societies have, are failures. China is suffering worse from COVID than anybody else in the world right now, but of course we have no real idea how bad it is there because they won’t tell.

China is run as almost an absolute monarchy by dictator Xi Jinping now, and as Zeihan says Xi gets little in the way of real information because it’s distinctly unhealthy to tell him things he doesn’t want to hear.

All of these things do serve to produce a collapse when they’re tried. China has all of them going at the same time.

Which means Zeihan could be correct in his prognosis.

Interested in more national news? We've got you covered! See More National News
Previous Article SADOW: The Democrats Just Imposed One Of Theirs On A Republican District In Caddo
Next Article SADOW: Bossier Jury Must Value Honesty In Hiring Choice