Some eyewitness material from Mick Wright at the Tennessee Conservative Blog illuminates a little bit more about how a relatively peaceful protest outside the Hilton Riverside on Friday night turned into something a bit more sinister.

Wright, who was at SRLC, went out among the protestors outside the Hilton. He picked up the flier you’ll see at the left, and with it provides us with some fairly strong proof that the Iron Rail Book Collective was behind not just the Hilton Riverside protest but the “afterparty” at Brennan’s. 511 Marigny Street is the Iron Rail address. Wright says the handwriting on the flier came from a protester he also saw taking video of the demonstration, and states that this clip was what he was shooting:

The YouTube user who posted that video is “francisnblake,” which might ring a bell for you if you review that flyer above.

Also by “francisnblake” is this clip, the first video we’ve seen from outside Brennan’s:

That video corroborates the rather braggadocious accounts we’ve seen on various anarchist websites, in that some of the chanting is identical and the general character of forcing attendees at Brennan’s to walk a gauntlet of protestors holds up.

This video shows how attendees were treated in a little more detail:

Finally, the police came and shooed the demonstrators away, and most of them decide to head back to the Hilton, where they would go for a while before the protest fizzled.

A couple of hours after the Brennan’s demonstration broke up, Joe Brown and Allee Bautsch left the restaurant and were attacked.

In some of these videos, we see a female speaker who in the first clip exhorts protestors to go from the Hilton Riverside to Brennan’s and in this one, at Brennan’s, proceeds to call Jindal “dirty.” You’ll notice the attire:

That red “A” with a circle around it on a black flag? It’s an anarchist flag. Specifically an anarchist-communist flag. It’s also the exact flag design you’ll see over the inside door at the Iron Rail Book Collective. It wouldn’t be an enormous surprise if the flag she’s wearing isn’t the exact same flag from the Iron Rail.

Wright thinks that the woman wearing the anarcho-communist flag is Joanna Dubinsky, who we talked about in last night’s update. He could be right, as the picture she shows on her Facebook page looks pretty much identical: 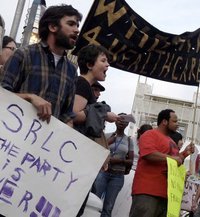 So now we have evidence that the protest at Brennan’s was significantly more intense than at the Hilton, and the protestors were driven away by the police. We know for a fact that some of the Iron Rail people not only organized the relocation to Brennan’s but they were there. We see some pretty explicit animus toward Jindal and the folks who were at his fundraiser.

What we don’t know is that any of the protestors were still at Brennan’s when Allee Bautsch and Joe Brown left, or whether they were involved in the attack. But given that neither were robbed and that the attack on them was a lot more than a little scuffle or a hit-and-run, which is evidence that they were beaten with a purpose, wouldn’t it seem most likely to suspect a relationship?

The New Orleans Police say they’re looking for leads. Perhaps they should look at 511 Marigny Street.