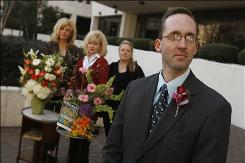 Featuring Tim Keller of the Institute for Justice

Does the State of Louisiana have the power to decide who may arrange and sell flowers and who may not? A recent federal lawsuit filed by the Institute for Justice argues that it does not.

The lawsuit is based on the fact that one of the freedoms we enjoy as Americans is the ability to earn an honest living in the occupation of our choice without arbitrary government interference. If Louisiana can license a harmless occupation like floristry, there is no limit to what it can license or to the burdens it can impose on honest, productive livelihoods.

The U.S. Constitution protects every American’s right to earn an honest living in the occupation of their choice and prohibits the government from erecting barriers to entrepreneurship that are arbitrary or do nothing more than keep entrepreneurs from competing with existing businesses.

Tim Keller will discuss the cases he and his colleagues at the Institute for Justice have litigated around the country in an effort to protect and expand economic liberty. Join us for this special luncheon!

Tim Keller serves as the Institute for Justice Arizona Chapter’s executive director where he litigates school choice, economic liberty, and other constitutional cases in state and federal court. Tim’s legal strategy is to not only fight for people’s civil liberties in the court of law, but also through legislation and the media. He received his law degree from Arizona State University where he was a member of the National Moot Court team. He earned his bachelor’s degree in Economics from Arizona State University, graduating magna cum laude. Tim has also worked as a research assistant at the Goldwater Institute, a state-based free market public policy organization.

See the Institute For Justice web site for more information.

Interested in more national news? We've got you covered! See More National News
Previous Article The ‘Peace Through Strength’ Platform: An Agenda For National Security
Next Article Outrage of the Day 5-16-2010 (Updated)