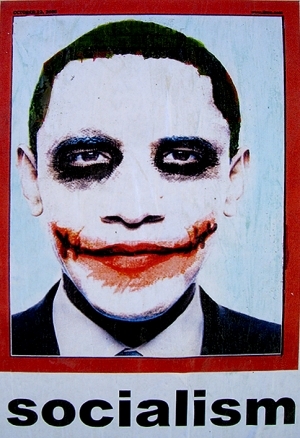 UPDATE: We’re not going to break our arms patting ourselves on the back, but less than a day after we posted this piece out comes a poll by James Carville and BP’s Stan Greenberg with some numbers which more or less confirm what we were saying. Specifically, that 55 percent of likely voters think Obama is a socialist.

That’s up from 40 percent in March, when those holding that opinion were demeaned and lampooned as cranks and “wingnuts.”

ORIGINAL POST: Back in March, amid the debate over the impending passage of Obamacare, U.S. Rep. Michele Bachmann (R-MN) caused a major stir by using the “M-word” to describe our President. Bachmann compared the tactics and governance of the Barack Obama-Nancy Pelosi-Harry Reid trio to Hugo Chavez’ Venezuela and called for an “orderly revolution” in November to break up that band.

Bachmann’s rhetoric scared the dickens out of the GOP establishment, as House Minority Leader John Boehner had just a few months before denied calling Obama a socialist during a Meet The Press appearance on NBC and followed that denial up with an emphatic statement that he didn’t think the president was one. After Bachmann’s statement, there was a considerable amount of tut-tutting and tamping down of the rhetoric.

But the conservative base from which the GOP draws its sustenance has always believed Obama is a socialist, just as conservatives have long believed the politicians atop the Democrat congressional leadership were socialists. There’s only so much socialism a Nancy Pelosi can practice through legislative action and campaign rhetoric before what quacks and walks like a duck actually is termed one. When it first became apparent that a large segment of the American population identified the President with extreme left-wing ideology, that was chalked up to rabble-rousing by Rush Limbaugh and Sean Hannity – not a reflection that many Americans recognized the Democrats’ policies for what they are.

Fast forward to July, and what used to be relegated to the discussions of “wingnuts” in the conservative blogosphere and the “far-right talk radio crowd” is now beginning to gain acceptance in more “respectable” circles – namely, that Bachmann was right, Obama is a Marxist, so are his people in the White House and so is the Democrat leadership on Capitol Hill.

Jon Ward has a piece in today’s Daily Caller which aims short of the Marxist mark, declaring that an “anti-business” moniker is gaining acceptance for the president:

The idea that President Obama is anti-business broke into the mainstream this week.

It has long been a widely held view on the right that Obama’s rhetorical nods to the free market and American business were little more than that. But as Washington slowly staggered back to work this week following a long July 4 weekend, discussions of Obama’s troubled relationship with the private sector popped up with surprising frequency.

Newsweek’s Fareed Zakaria wrote Monday that after speaking with numerous corporate executives, most of whom voted for Obama, he found that “all think he is, at his core, anti-business.” Tuesday, the Washington Post reported on a 65 percent decline from two years ago in donations to Democrats from Wall Street, due to the financial regulation bill nearing passage in Congress.

On Wednesday, the Daily Beast’s Lloyd Grove reported from the Aspen Ideas Festival in Colorado that New York Daily News owner and publisher Mortimer Zuckerman said the Obama White House has a “hostility to the very kinds of [business] culture that have made this the great country that it is and was.”

Steve Pearlstein of the Washington Post noted: “There is no denying it — bad blood has developed between big business and the Obama administration, and that’s not a good thing.” Pearlstein argued that businesses could do much more to pull their weight on improving the economy rather than blaming the administration.

Even Bloomberg News Washington editor Al Hunt, in an op-ed arguing that Obama is not anti-business, said that “Obama should realize that’s what he too often conveys.”

Ward’s piece goes on to reference the outburst from Verizon CEO Ivan Seidelman last month decrying Obama’s anti-business policies – a protest which was later joined by GE CEO Jeffrey Immelt, whose sidling up to the president and propagandizing on Obama’s behalf through GE’s NBC News operation has made his company a pariah among conservatives.

And now, with the recess appointment of a man who lauds the incontrovertibly socialist British national health care system to run the Obamacare initiatves – an appointment even some Democrats are crying foul about – it’s becoming harder and harder to deny that the President’s colors are showing.

This recognition – by more than just the conservatives who have screamed about Obama’s leftism since before he was elected – is beginning to drive the President’s poll numbers southward. In the latest Rasmussen survey, which finds Obama’s Approval Index to be minus-17, 50 percent of the American people now rate Obama “poor” on the economy – a new high. Rasmussen also finds a couple of other interesting nuggets of information which suggest a rejection of left-wing economics:

Rasmussen also finds 60 percent of the American people continue to favor a repeal of Obamacare, which is seen by overwhelming majorities as a step toward socialism.

Couple Rasmussen’s results with a Fox News/Opinion Dynamics poll which found that 61 percent of independent voters are either “disappointed” or “angry” with the president – independent voters usually care about economic issues and not much else – and the dissatisfaction with his policies becomes more evident.

Americans, other than the hard-core Left which makes up about 20 percent of the population, don’t want a socialized government or economy. This has long been true. Obama’s genius in the 2008 campaign was to hide the fact that he was a Marxist or socialist, without which he couldn’t have been elected. But his governance is making that deception less effective, and now it’s even being discussed in establishment circles.