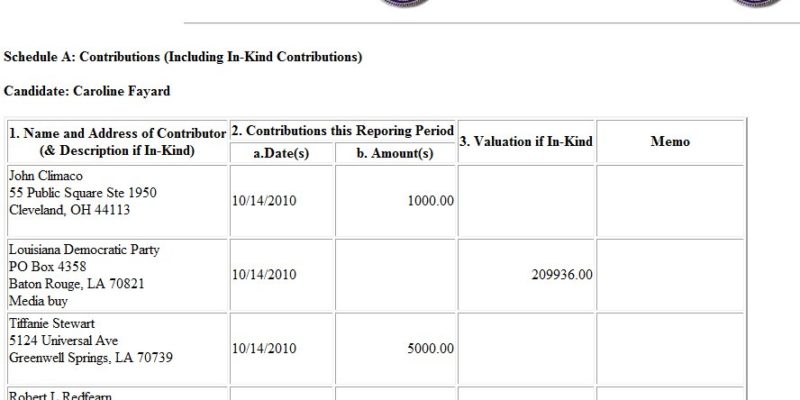 UPDATE: The Baton Rouge Advocate reports that the $210,000 the state Democrat Party gave in kind to the Fayard campaign will indeed be used for TV spots. And those spots are going to tout Fayard, according to state party chairman Buddy Leach.

“They will promote her,” Leach said of the advertising. “Caroline is the candidate that’s fresh. She’s not getting into that negativism.”

ORIGINAL: Normally, poring over campaign finance statements is pretty tedious work. The information one can glean from those records is fairly substantial, but it’s usually dry as a bone.

Every once in a while, though, you run across a candidate whose finance reports are actually interesting. And once in a blue moon, you find one whose disclosures are a real page-turner. Democrat Caroline Fayard, running for Lieutenant Governor against current Republican Secretary of State Jay Dardenne is such a candidate.

Take, for example, a pair of disclosure forms filed on Thursday, October 15. Those two disclosure forms are nearly identical. In each, you’ll find three cash donations from individuals – and an in-kind donation for a “media buy” from the Louisiana Democrat Party.

But there you’ll find a difference; in one form, you’ll see that the media buy the LDP made on Fayard’s behalf was for $209,936. 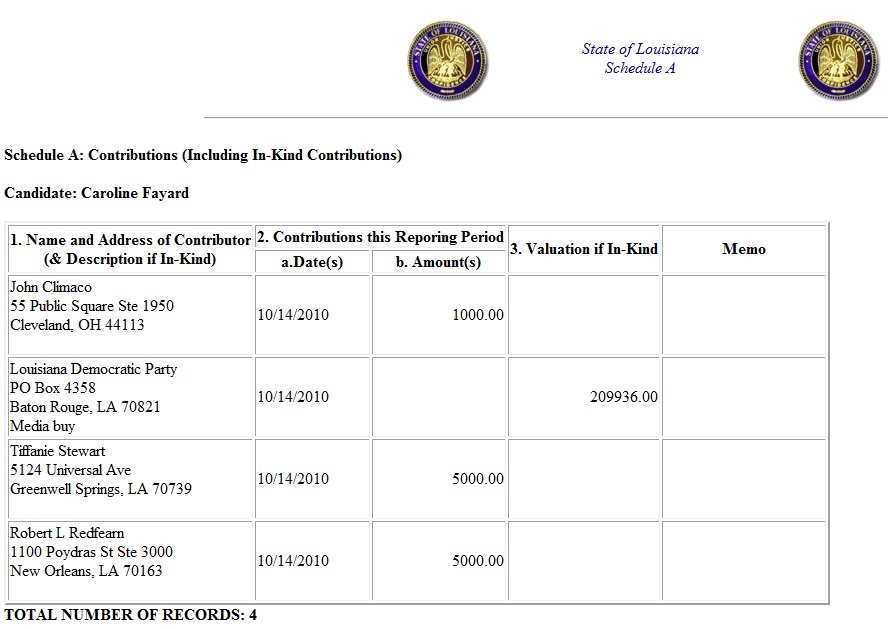 But on the other form, you’ll see a valuation of zilch. 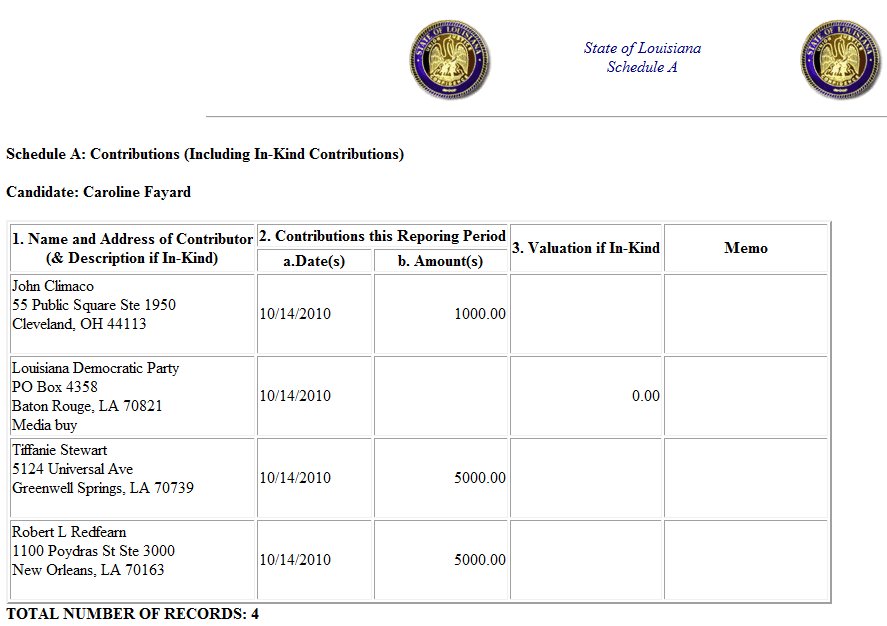 Now, it’s difficult to discern from the reports which is the original and which has been amended. It could be that Fayard’s campaign knew the state party was making a media buy and didn’t know how much it was going to be for, so they filed a report with a zero in the valuation and then amended it when they got the total. Or it could be the party gave them a figure and then canceled the buy.

Or maybe the LDP really is putting out a $210,000 media buy. But since it’s only two weeks before election day and we haven’t seen an ad by the Louisiana Democrat Party in Fayard’s support (maybe it’s a final-days blitz), Fayard’s campaign decided not to show any value yet.

Or it could be something else.

We’re told that squishy filings like this very often indicate the presence of “street money,” an old-time political tool predominantly used by Democrats to turn out the vote in certain communities where homogenous straight-ticket voting is commonplace.

We know that Fayard spent some $30,000 on election-day canvassers during the primary. We know this from campaign filings her campaign has already posted. So the idea that the campaign would be using street money to turn out the vote isn’t particularly novel or surprising.

Of course, $210,000 is a LOT of street money. Particularly for the Lieutenant Governor’s race. That’s Buddy Leach/John Georges-style street money. Naturally, those two guys wasted the cash they spent trying to turn out bloc voters in their 2003 and 2007 gubernatorial campaigns, respectively. Leach is now the head of the state Democrat Party, moreover, and if he was willing to spend $44 of his own money per vote in 2003 in a failed campaign for governor it’s not hard to imagine he’d sanction the use of much smaller sums of someone else’s money to help Fayard.

Wait – this is all crazy talk. After all, Fayard has said she’s something new and different…

Fayard is trying to paint herself as an outsider and a fresh-faced alternative with new ideas to the “old political ways” that she says Dardenne represents. “I am an alternative,” not a career politician responsible for the state’s problems over the years, Fayard said.

…so it’s impossible for her to be involved in doing the exact same sleazy things that Louisiana Democrats have been doing for decades in an effort to win elections. She’s something new, y’know, and she’s not ideological at all.

“I certainly think I’m a new face and I’m a registered Democrat, but I’m not running on my party affiliation. I don’t think it’s conducive to the office I’m running for,” said Fayard, a 32-year-old New Orleans lawyer with deep family roots in Democratic politics.

For example, after six members of the Fayard family “maxed out” in donations to Hillary Clinton in March of 2008 – all six made $4,600 donations and had to be reimbursed half that figure when Clinton lost the Democrat nomination to Barack Obama – there were no donations to Obama’s campaign from the Fayard family or any employees of Calvin Fayard’s law firm. In fact, Cynthia Fayard, Caroline’s mother, donated a whopping $28,500 to the Republican National Committee in October of 2008.

Which passes for bipartisanship and “centrism,” we suppose. That donation was the only one by a member of the Fayard family – or an employee of the Fayard firm, which as our research indicates is functionally the same thing (more on that in a future update) – to a Republican candidate or organization in the 2008 election cycle.

It’s interesting stuff. The Fayards are dumping money on the street in an effort to turn out votes, primarily in the black community, from people who are overwhelmingly supportive of President Obama. But when it was time for Democrats to elect Obama president in 2008, the Fayards shifted gears in a very abrupt manner and dumped a staggering amount of money into an effort to defeat Obama.

How many of the recipients of this street money spent in the primary and potentially headed to the pavement on Nov. 2 are aware that the political machine being run out of the Fayard Law Firm dropped a major chunk of change on the Republican Party a week before the 2008 election? How many of those recipients would even be interested to know such information?

As for the rest of us, we’re expected to just shrug this information off as proving Caroline Fayard’s story she’s actually a centrist and not a limousine liberal Democrat as her opponent claims she is. We’re not supposed to draw any inferences from the fact that the Fayards – and their employees – make lock-step donations to politicians in the thousands of dollars in each election cycle, almost all of them being Democrats.

Because after all, she’s something new. We’re reading it in the newspapers; it must be true.