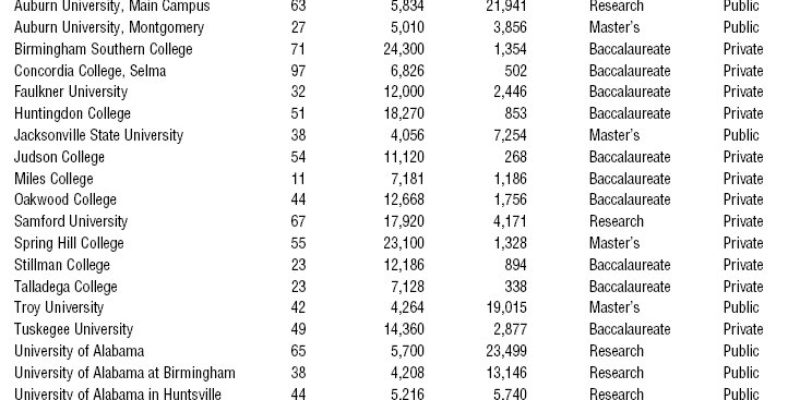 The debate over the future of Louisiana’s inefficient and cash-starved higher education system promises to heat up considerably – and soon.

After all, Gov. Bobby Jindal has spent most of his time in the last month stumping for Republican candidates across the country in advance of Tuesday’s elections, a schedule which has given Jindal’s detractors ammunition to push a narrative that he doesn’t care about Louisiana. Those detractors in the academic community have particularly focused on the $35 million in proposed cuts to higher education to cover a mid-year budget deficit of over $100 million. Calls for a special legislative session are mounting, and the state’s left – both academic and otherwise – are screaming for tax increases to support higher education.

It seems the two sides are largely talking past each other, though. The issue of higher education isn’t a binary one; if simply throwing money at the state’s colleges would make them better Louisiana should be one of the nation’s hotbeds for graduate and undergraduate education. We rank ninth among the 50 states in the percentage of state dollars going to higher education, and yet we’re in the bottom 10 in terms of our college population. The state’s 38 percent six-year graduation rate is 15 points lower than the Southern average.

Clearly, just spending on schools isn’t the answer, as the Lafayette Advertiser notes in an editorial today. The paper also recognizes that the inevitable raft of mergers and school closings that the state’s structural budget deficit (after the emergency cuts to satisfy the mid-year deficit have been made, there will be another $1 billion or more, perhaps a lot more, needed next year) necessitates will make for a bloody fight.

That’s true because few see higher education as education in this state. Louisiana’s colleges don’t exist in the minds of our politicians to educate students; they exist to provide jobs. Otherwise the system wouldn’t be as rife with duplication and top-heavy with administrators as it is.

But in reviewing the putrid graduation rates among the state’s colleges – 11 of Louisiana’s 14 public four-year institutions have tuition rates under $4,000 per year and UL-Lafayette is the only one capable of graduating 40 percent of its students within six years – one thing became patently clear.

Namely, Louisiana is a major outlier when it comes to the public-private breakdown of its higher education offerings.

The American Enterprise Institute’s study of six-year graduation rates provides a tremendous reference in analyzing the field Louisiana plays on. And that study shows the heavily public nature of our state’s college choices is a very different path than most of the rest of the states in the South have chosen.

Specifically, in Louisiana the figures are these… 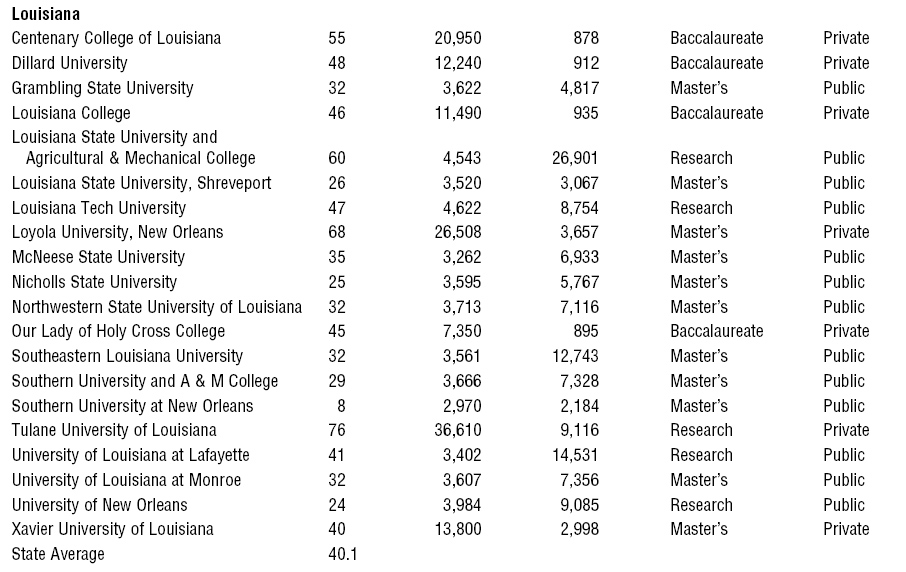 For those who aren’t big fans of counting, there are seven private colleges listed. The study listed 13 of the state’s 14 public four-year institutions; LSU-Alexandria is omitted, and state Board of Regents figures show it has a five percent six-year graduation rate. The Regents’ numbers largely mirror those from the AEI study, though a percent or two difference does show up here and there.

But let’s look at some other states, and see whether the 2:1 ratio of public-to-private schools will hold up.

First, we’ll look at Alabama, with a similar population and demographic profile… 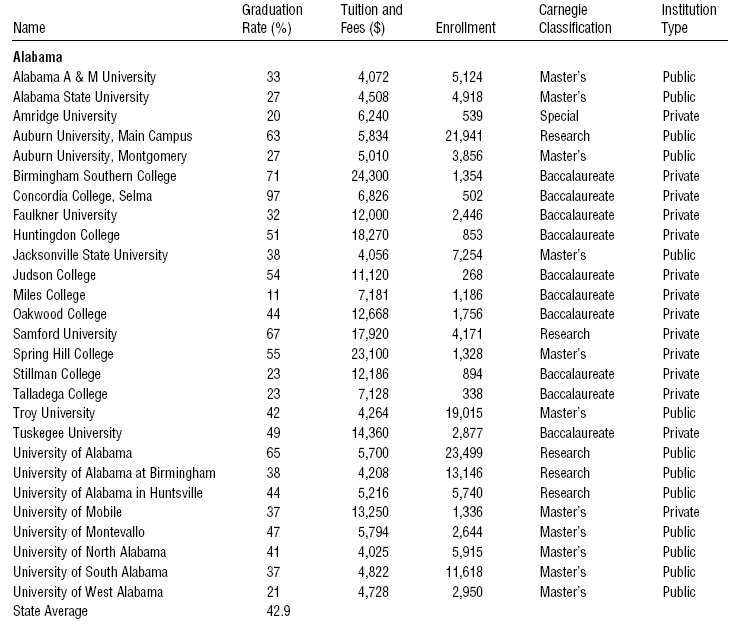 The study shows that Alabama’s overall six-year graduation rate is a couple points higher than Louisiana’s, Alabama has seven more institutions than Louisiana does (27 to our 20, though LSU-A isn’t counted) and Alabama’s public-to-private ratio is nothing like ours. They’ve got 13 public institutions and 14 private ones. And of those 14 private schools none of them have tuition rates anywhere near Tulane’s $36,000 per year – or above Loyola’s $26,000 per year.

Let’s next look at another Southern state: Arkansas… 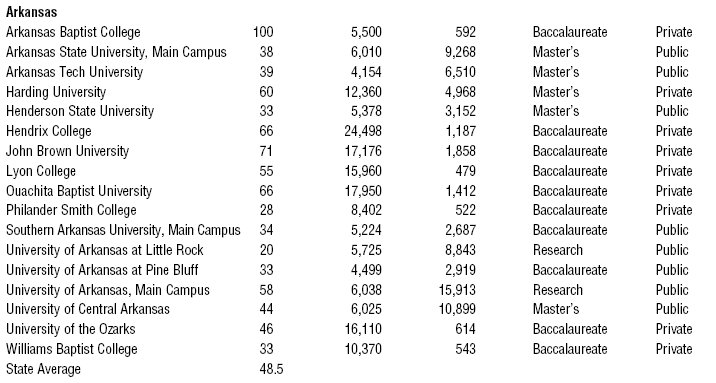 Here’s a state with a significantly smaller population, yet a significantly higher college graduation rate of 48 percent compared to Louisiana’s 40 (as expressed in the AEI study). Arkansas has almost the same number of educational choices that Louisiana does, though – 17 schools to our 21. But only eight of those are public; the other nine are private. Again, none of the private institutions have tuitions higher than Tulane or Loyola.

Ready to look at Florida? You’ll be a little surprised… 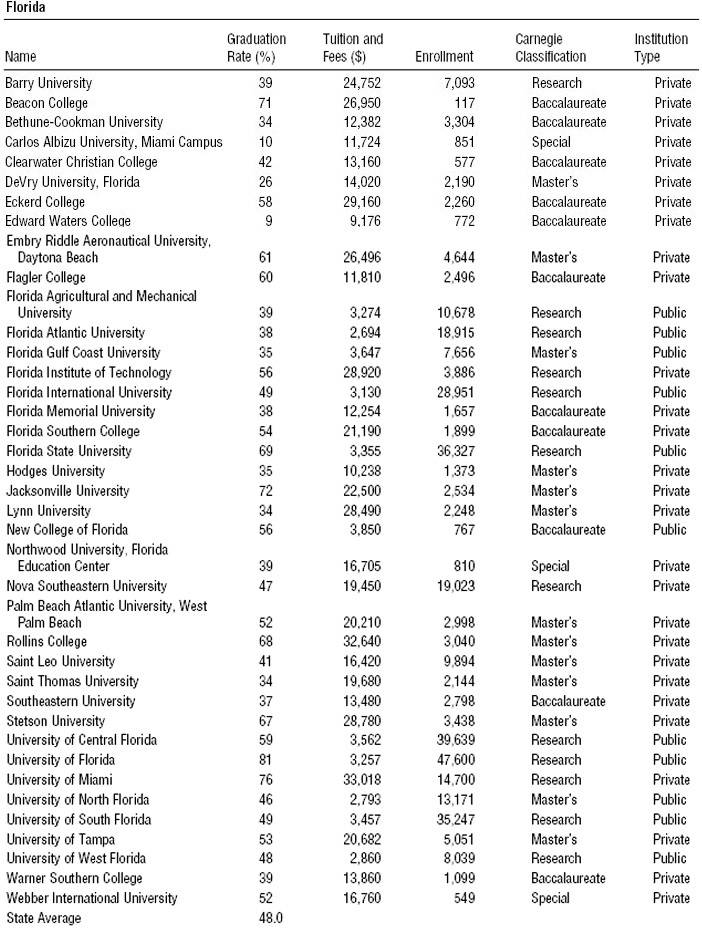 Florida has 39 colleges, and only 11 of them are public. They’ve got 28 private schools! And while the demographics of the Sunshine State aren’t exactly like those here, they’re not so far off the mark as to explain a completely reversed public-to-private ratio.

Florida’s 48 percent graduation rate is lower than one might expect, but it must be remembered they’ve got a well-developed community college system and a large number of the non-graduates in their four-year system at least have Associates’ degrees – which would put Florida at an advantage compared to Louisiana. 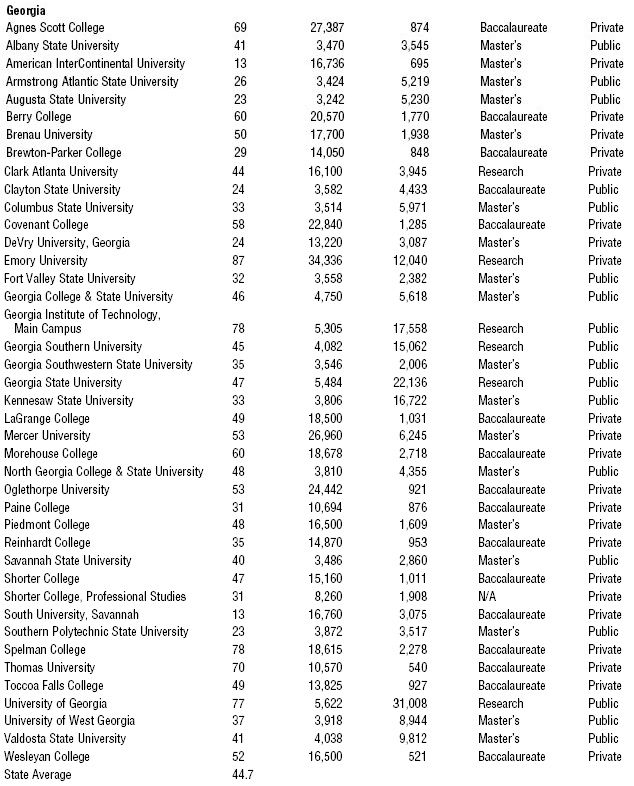 Lots of colleges in Georgia, though the 44.7 percent graduation rate isn’t the greatest. But again, we see a far heavier private population than Louisiana. There are 23 private schools to 18 public ones. And while Mercer and Oglethorpe have tuitions similar to Loyola’s, again there are no schools in Tulane’s ballpark. 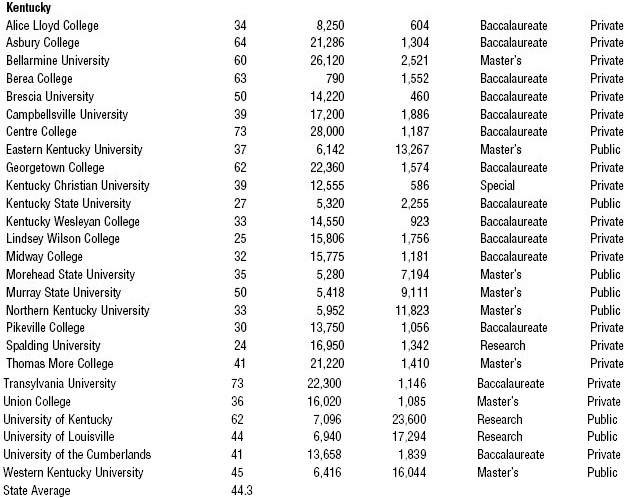 The graduation rate isn’t sensational at 44.3 percent, but In Kentucky a smaller state population than Louisiana’s has 26 schools to choose from. And only eight of them are public, with 18 private schools. There are some high-end options with tuition rates in the 20’s like Centenary and Loyola offer, but nothing like Tulane – and the majority of the private schools compete with tuition rates considerably lower. Not to mention that the public schools in Kentucky have MUCH higher tuition rates than those in Louisiana.

A 46.1 percent graduation rate beats Louisiana by six points, and Mississippi’s K-12 system stinks as badly as Louisiana’s. Moreover, Ole Miss and Mississippi State are both lower than LSU in six-year graduation rates. But with 15 schools to service a smaller population than we have, there are seven private schools and eight public ones. Private tuition rates are considerably cheaper than Louisiana’s private institutions as well. 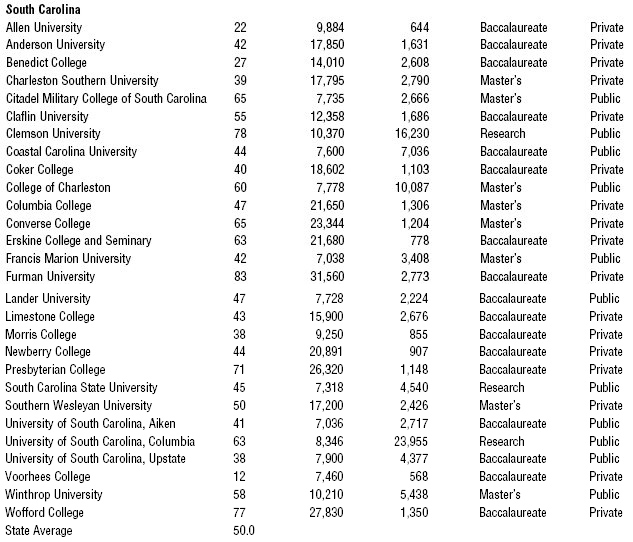 You wouldn’t think of South Carolina as a state Louisiana should emulate, but in education maybe it wouldn’t be a bad idea. The state’s graduation rate is at 50 percent, there are 28 schools to choose from in a less-populated state and 17 of them are private. The competition looks like it has produced a relatively wide range of tuition rates within the private sector, and public school tuition is consierably higher than it is here with, from what it looks like, considerably better graduation rates. 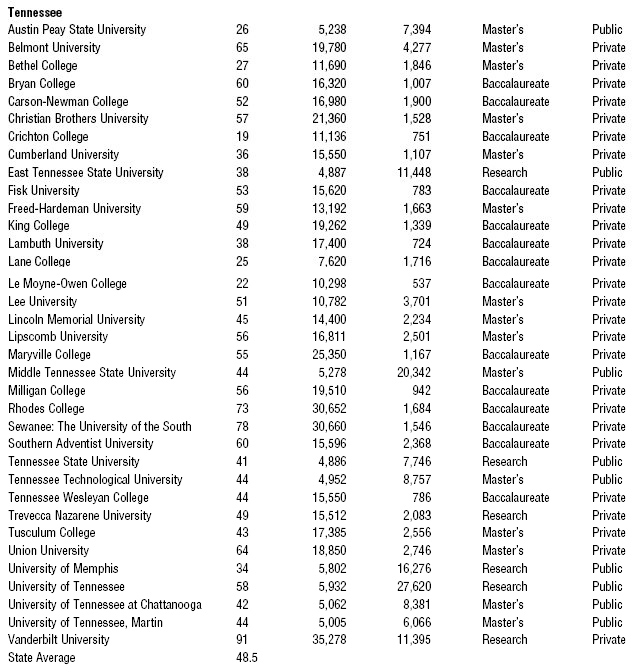 Besides the interesting fact that Vanderbilt is actually less expensive than Tulane, what’s striking about Tennessee is the fact that there are 26 private colleges to only nine public ones there. Yes, a lot of those private schools are extremely expensive. Many aren’t, though. And the competition in that system has produced a 48.5 percent graduation rate we’d be fairly happy to have.

Finally, some numbers on Texas next door; there are 35 private and 28 public colleges, and the state’s graduation rate is 45.8 percent. Interestingly, Baylor, Rice and SMU are all less expensive than Tulane, with SMU’s tuition at $31,000 the most expensive in the state.

Looking at all this data, what seems very clear is that the private sector needs to be more competitive in Louisiana. Our experience is a classic case of the public sector freezing the private sector out, and as a result Tulane as the only private school of any size has become able to charge a ridiculous amount of money in tuition which, frankly, has not produced the kinds of results for the state one would hope for. In fact, Tulane’s student body is barely representative of the state at all; just under 16 percent of the entering class last year at Tulane was from Louisiana.  Certainly that’s not a bad thing, but it’s indicative that very few of Louisiana’s high school graduates who pursue a degree at a private institution do so at Louisiana private schools. Of Loyola’s 3,600 students less than half are from Louisiana as well. I can’t speak to the geography of Xavier’s student body, but I assume it’s not substantially different. And with only three private schools in Louisiana not being in New Orleans and none of them having enrollments over 1,000, if you’re not going to college in the Big Easy, it’s almost assured you’re going to a public school. No other state in the South is set up this way.

In the meantime, Louisiana is covered with public universities where tuition rates are heavily subsidized by taxpayers and outcomes are poor. It’s clear we can’t afford to keep all of these schools going; everybody knows the state’s system is going to need to consolidate. And the graduate educators and students are howling; it’s being said that if you’re working on a PhD at a university in Louisiana you can be virtually assured that your first job will be outside the state.

But we’ve got campuses that are relatively strategically located in markets throughout the state which should be able to support a college. LSU-Shreveport isn’t succeeding in its current mission, and yet Shreveport-Bossier is a metro area of some 375,000 people. Centenary is a fine institution, but it has only 878 students. Wouldn’t privatization for LSU-S (renamed as the University of Shreveport, perhaps) be an option, particularly with the expectation of vast private endowment resources emerging from the Haynesville Shale bonanza?

Or as another example; what about Nicholls State or McNeese State? Wouldn’t those two universities be better able to craft a mission serving their communities if they weren’t governed by the politics of the University of Louisiana board and the Board of Regents? Located as they are so close to the Gulf, you would think those two schools could do quite well training engineers, geologists, biologists and other professionals the offshore oil industry will need. Curricula helping to train offshore workers and folks in service industries to the offshore sector would also likely attract a great deal of cooperation from the companies, large and small, operating in that sector.

Certainly a recast Nicholls or McNeese wouldn’t be in a position to go from charging under $4,000 in tuition to $20,000. But would Louisiana be better off having TOPS subsidize, say, $6,000 of a $13,000 tuition for a private university that graduates 55-60 percent of its students and aggressively pursues private philanthropy and endowment than the current situation where the state covers some $10,000 of that $13,000 in real tuition through subsidies for an institution which graduates 32 percent? Certainly, such a change would be a political football. But wouldn’t privatization be better than a shutdown? Wouldn’t it be preferable to massive cuts which cripple the school’s ability to fulfill its mission?

There are some core schools in the state’s public system which need to be preserved. LSU, obviously, is one. UL-Lafayette and Louisiana Tech are two others. UNO, though its graduation rate is abysmal and major reform is needed, is a fourth. And the politics dictate Southern is a fifth. Inevitably a couple of others would need to be retained.

But beyond a well-defined core, perhaps it’s time to embark on a truly cooperative effort between the state’s leading citizens and its political class in order to save a few of our colleges by turning them loose and letting them innovate and compete as they see fit.

We know what we’re doing isn’t working. We can see that other states are having more success with a larger selection of private schools. It’s not too late to emulate our competitors and let the market improve Louisiana’s higher education.