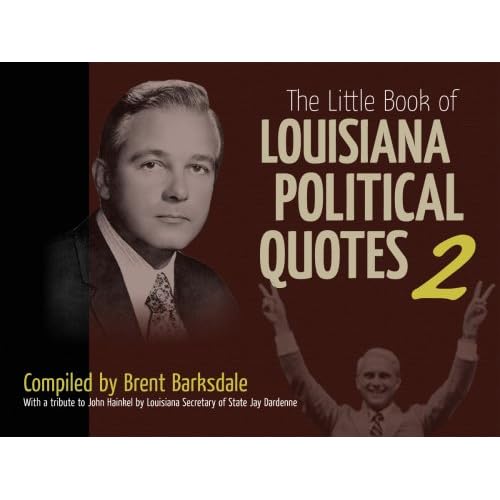 The new book has 500 gems from the state’s leading political figures – more than enough to keep attendees at your Christmas party laughing out loud even before they OD on egg nog. While the initial Louisiana Political Quotes offering had such classics as James Carville’s “Don’t get mad. Don’t get even. Just get elected, then get even” and Edwin Edwards’  “He’s so slow that he takes an hour and a half to watch 60 Minutes” assault on Dave Treen, the sequel has a flair for the more recent.

For example, legendary New Orleans politician and long-time state legislator John Hainkel had an incomparable Crescent City flare. Louisiana Political Quotes 2 keeps his words alive with an entire chapter of his colorful quotes along with a forward from his former Senate colleague and current Secretary of State Jay Dardenne.

“We are not losing teachers to Delaware.  Most teachers don’t know where it is.  They think it is punch.”

• “In Louisiana we don’t bet on football games. … We bet on whether a politician is going to be indicted or not.”

• “I vetoed it? I thought I signed it. I remember in the back of my mind saying, ‘Well, I won’t be governor anymore, I don’t give a damn one way or the other.’ ”

• “There’s a big difference between what’s illegal and what causes you people to raise your eyebrows.”

• “I only steal from Louisiana, not from Texas” [to a Texas reporter].

• “I’m tired of people thinking I’m going to quit living while I am governor. I can’t live off the governor’s salary.”

Also in the new book is a treasure trove of Hurricane Katrina offerings, as many of the state’s politicians showed their posterior regions – and other areas – to our televisions during that time.

So if you’re still agonizing over what to get the news junkies on your Christmas list – and remember, Friday is Christmas Eve, so you’re running out of time – just click here, and get The Little Book Of Louisiana Political Quotes 2 delivered before Christmas!