Well, the AK-47 takes a “high-capacity” magazine, and Iraq had lots of AK-47s… From this CNN screed on firearms:

“A high-capacity magazine in effect turns a semiautomatic firearm into a weapon of mass destruction.”

The CNN piece doesn’t make the case for more gun control. It only proves the two things common to most anti-gun articles: First, that The Left / Mainstream Media have few facts to back up their arguments for taking guns out of the hands of this country’s rulers (‘We The People’ still rule this country, right?), only well-publicized – but isolated – incidents, anecdotal conclusions, and shrill appeals to emotion.

Second, it shows how actually ignorant The Left / Mainstream Media are when it comes to firearms, and it assumes (hopes, actually…) that the rest of of us are as bereft of firearms experience and knowledge as they are. While firms do make a 30-round capacity magazine extension for the Glock, the writers conveniently forget to note that “a high-capacity magazine that held 31 bullets” is non-standard for a Glock. Implication: Glocks hold “31 bullets”. Eeeeevil! The “small sampling” of the “notorious cases” they cite are pretty much all of the notorious psychotic attacks in the US in the last two decades. They note only 11 in near 20 years, in a country the anti-gunners claim are awash in guns. Either the economists who authored this article knew all this and are trying to pump up the emotional punch of their argument, or they don’t know what they are talking about. It’s an either/or.

But the biggest indication that The Left / Mainstream Media don’t know jack about firearms comes from the graphic CNN used to illustrate the evil of high-capacity magazines. What looks to the untrained eye as a pile of spent pistol cartridge cases (implication: high-capacity) is, in fact, a pile of spent cases from a 105mm howitzer. Remember, CNN is supposed to be a “professional” journalistic organization (as opposed to us “amateurs” out here in blogosphere-land). I can understand mistaking a .45 case for a 9mm case, but really . As far as I know (and I was in the artillery for a while), carrying a 105mm howitzer concealed is a bit of a trick. At the very least, you need an oversized coat. You can’t pick up 105mm howitzer ammunition at Cabela’s or Wal-Mart, and besides, they are single-shot weapons – they don’t use “a high-capacity magazine”. The last “notorious cases” of mass shootings with artillery in the US were, what?… The Civil War?

If they don’t want to look as silly as this article makes them, the gun-scare faction would do well to actually know something about what they fear, and have some solid facts to back up their emotional arguments. They don’t, so expect more of the same as The Left / Mainstream Media attempt to leech some kind of political advantage out of the tragic event in Tucson. 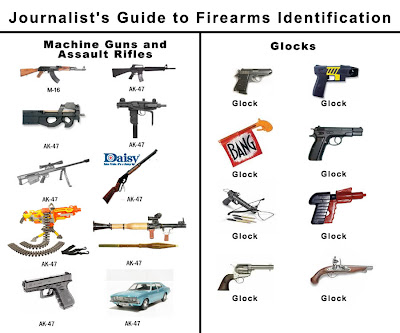