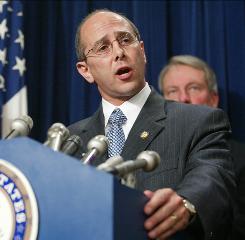 from a release out of U.S. Rep. Charles Boustany’s office…

US Representative Charles Boustany, Jr. (R-Southwest Louisiana) today commented on the sluggish unemployment numbers released by the US Department of Labor.

“These low job numbers prove America is still struggling toward economic recovery, and President Obama’s stimulus package isn’t working,” Boustany said. “We need to focus on cutting spending, improving American competitiveness, and improving the climate for businesses to grow and develop in this country.”

Boustany noted that job growth in Louisiana continues to be stifled by the slow progress on drilling permits in the Gulf of Mexico. “Many small businesses in Louisiana are still suffering as a result of the moratorium on drilling and the subsequent defacto moratorium,” Boustany said. “That deterrent from job growth needs to be resolved immediately, and I will continue fighting to get Louisiana back to work.”

The report released today shows that only 36,000 new jobs were added in January, far below employment numbers needed to dramatically improve the economy.  The report also revised last year’s job numbers, indicating that fewer jobs were created in 2010 than previously estimated.

As a member of the Ways and Means Committee, Congressman Boustany plays a lead role in shaping effective policies to grow the economy, including finalizing trade agreements, revitalizing American competitiveness abroad and revising the tax code to foster business development in Louisiana.