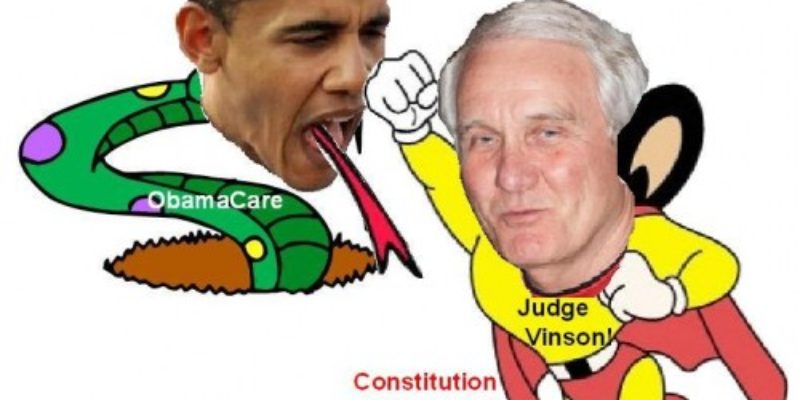 Back in December, Obamacare opponents, led by Virginia Attorney General Ken Cuccinelli, won their first judicial victory in Richmond.  After Judge Henry Hudson ruled in favor of the plaintiffs, Cuccinelli immediately called for the case to be put on a fast track to the Supreme Court.  That motion was denied.

After the recent ruling by Judge Robert Vinson, perhaps the courts will change their minds..

There is one notable difference between Hudson’s ruling and the most recent ruling by Vinson, and that main distinction is that Vinson found the entire law to be void due to the central importance of the individual mandate (which he found to be unconstitutional).  Now, why Hudson did not see things the same way is puzzling, but in many ways, the clash of the two rulings supports Cuccinelli’s case.

The issue here is one of uncertainty.  It is difficult to argue that the case should proceed through the regular circuit of judicial proceedings in the face of such a nationwide disturbance.  In fact, it is very easy to see that the main reason the DOJ wants to keep the case in the court system is to increase their chances of scoring a favorable ruling prior to the Supreme Court showdown.  Ironically, such a desire furthers Cuccinelli’s argument because any contradictory future ruling would magnify the uncertainty facing both the insured and uninsured.  We have had a ruling strike down the individual mandate, a ruling void the entire law, and rulings uphold the law, and the resulting uncertainty produces a significant negative impact on our health care system.

The Justice Department had this to say about the fast track proposal:

Tracy Schmaler, a spokeswoman for the Justice Department, said the agency continued “to believe this case should follow the ordinary course” so that legal arguments could be fully developed before being presented to the Supreme Court. She pointed out that the insurance mandate does not take effect until 2014 and that the Fourth Circuit has already expedited its schedule by setting oral arguments for May.

The argument about “developing legal arguments” is absurd.  There is one argument in this case regarding the interpretation of the Commerce Clause.  It is an easily understood argument, and to assert that the it needs further development is just a roundabout way of saying, “we just want to get another victory on the record before we go to the Supreme Court.”  They want to muddy the waters because it increases their chances in the end.

Furthermore, Obama’s distinct contempt of the court makes the fast track an absolute priority. A few days ago,  Judge Martin Feldman held the Obama Administration in contempt for refusing to remove the Obamoritorium after it was struck down last fall, and even though Obama’s contempt was well known in advance of this ruling, the official statement certainly solidifies the view.  Why is this important?  Well, last fall Obama decided to ignore a federal court injunction against the Obamoratorium, and he was held in contempt after Judge Vinson ruled to void Obamacare.  Here’s why Vinson decided against issuing an injunction:

“…there is a long-standing presumption “that officials of the Executive Branch will adhere to the law as declared by the court. As a result, the declaratory judgment is the functional equivalent of an injunction.”

There is certainly an argument to be made that this “long standing presumption” should be ignored.  Obviously, Obama has no plans to adhere to a declarative ruling because he is on the record as being held in contempt for ignoring an official injunction…

The Administration responded to Vinson’s ruling in the same way that it did to the Obamoratorium ruling:

We don’t believe this kind of judicial activism will be upheld and we are confident that the Affordable Care Act will ultimately be declared constitutional by the courts.

So, they are confident the courts will approve Obamacare, but they don’t want to actually test their argument in the Supreme Court quite yet. Interesting.

The other reason the DOJ wants to drag this thing out is because of Obamacare’s implementation strategy.  Obamacare is currently being implemented in stages over multiple years with the full implementation of the plan occurring in 2014.  In this way, the DOJ is right to say that going through typical procedure will help develop their legal argument.  If this case gets dragged through the circuit court system, it will eventually reach the Supreme Court a few years from now, and by 2013, instead of arguing on the constitutional merits of the program, the DOJ will be arguing that it is too late to reverse the law.  It’s certainly not a grounded legal argument to be sure, but then again, neither is the claim that the government has the right to regulate inactivity.

So, Cuccinelli’s request has gained significant legitimacy over the past few days.  First, Vinson ruled that the entire law should be struck down because of the centrality of the individual mandate, and he refused to submit an injunction based on judicial presumptions.  However, these presumptions have been refuted by Obama’s precedent of ignoring judicial rulings and Feldman’s subsequent decision to hold the Interior Department in contempt.  Secondly, the quagmire of uncertainty accompanying the varying degrees of support and rejection by multiple court cases has made haste a priority.  Finally, the inherent weakness and self-interested motivation of the DOJ’s argument against the fast track is pathetic and easily distinguishable.

Maybe the case won’t get jumped to the Supreme Court, but it won’t be because there is a lack of legal support…