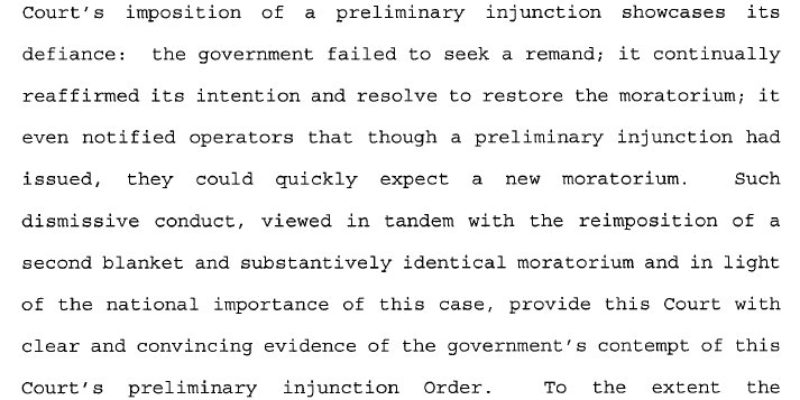 Feldman’s eight-page ruling, which can be found here, sets forth the elements of what he calls a “determined disregard” for the order he gave in June to lift the moratorium. The judge goes through a chain of events which to him amounts to a pattern of behavior unmistakably showing a commitment to ban offshore drilling, and then refers the case to a magistrate in order to determine damages owed to Hornbeck Offshore Services and the other plaintiffs in the case by the Department of the Interior.

Hornbeck’s general counsel, Sam Giberga, said in a written statement, “What is striking about today’s ruling is that it holds the government, acting through its highest levels, in contempt of a federal court order.”

“Judge Feldman’s decision is a sharp rebuke of the Interior Department for continuing to place politics before all else following the BP spill.  A ruling of this nature reveals that the judge believes that Interior blatantly disregarded his earlier ruling – undoubtedly because of their actions that led to the current de facto moratorium,” said Vitter.  “Federal permitting has fallen off a cliff, and the resulting impact on Louisiana families, jobs and domestic energy production has caused a lot of pain in coastal Louisiana.”

The Vitter release also noted the possibility, though dim, that Louisiana workers and businesses hit hard economically by the moratorium could recover compensation for the damage it has done to the state’s economy and the oil industry. It did, however, declare that Feldman’s contempt order might strengthen the case federal leaseholders might have for breach of contract against Interior based on mineral leases they paid for and received permits to drill under before what appears to have been an illegal moratorium was instituted.

In Feldman’s contempt order, the judge noted a string of complaints surrounding Interior’s conduct of the moratorium…

Feldman quotes the legal standard for contempt as requiring the presence of a judicial order, the requirement that a party abide by the dictates of that order and the failure of compliance by the party in question. The first two elements aren’t in question, but the judge found that the pattern described above satisfied the third.

Interestingly, Feldman said that Hornbeck’s argument that the second moratorium on its own “falls short” of establishing clear and convincing evidence that the government disregarded his injunction – but that only brings up the money paragraph of the order… 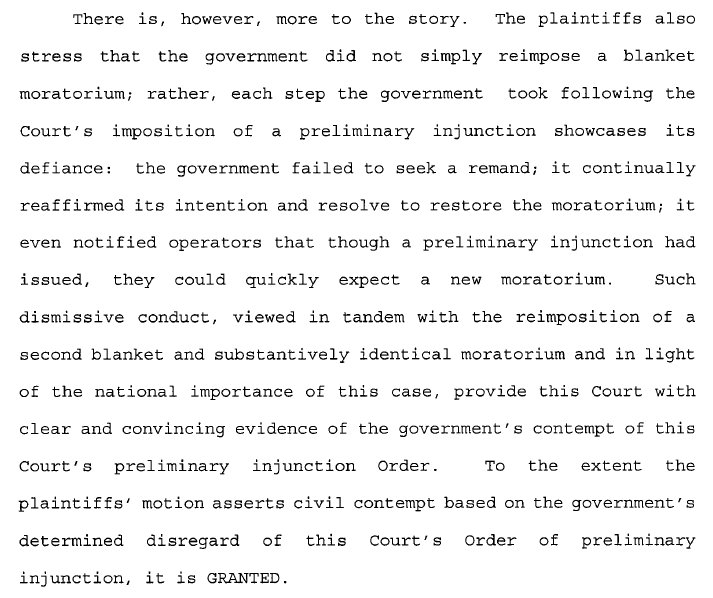 It’s a savage rebuke of Salazar’s conduct. The import of its contempt finding is not yet known, but with oil prices topping $100 per barrel and the president meeting with key advisors on energy policy earlier today, one wonders what Obama’s next move will be. Clearly, his policy is a shambles and his administration is thoroughly discredited on energy as a matter of policy – and with Feldman’s ruling today, as a matter of law as well.